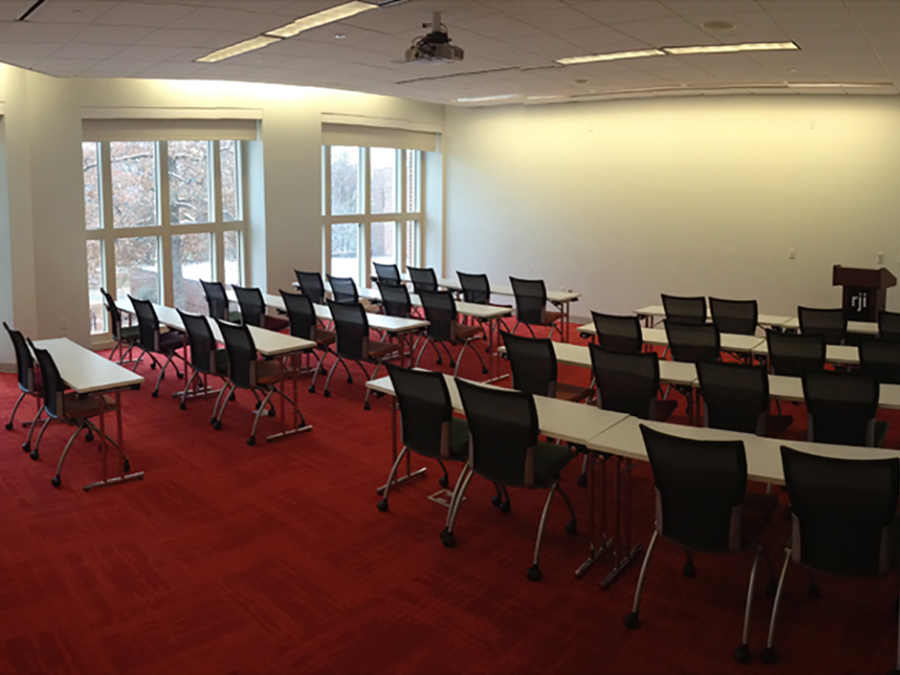 The Palmer Room (RJI room 100A), affectionately referred to as “the Fish Bowl,” can be found on the main floor of the Donald W. Reynolds Journalism Institute. When not used for presentations or receptions, the Palmer Room is often used by students as a study area.

The Palmer Room was named in honor of C.E. and Bettie Palmer, who owned newspapers, radio stations and a television outlet covering southwester Arkansas and part of northeastern Texas during the early to middle 20th century. As philanthropists, the Palmers influenced the education of a generation of school children when their foundation underwrote the publication of the Golden Rule Series of readers by the American Book Co.

This room contains 48 chairs at 24 classroom-style tables. The room is also equipped with two projectors and screens, audio speakers, a lectern and wireless microphones.

The RJI Lobby often serves as an overflow venue for events held in the Palmer Room, or as a registration area for these events.

Smith Forum (Room 200) in RJI was named in honor of Fred Smith. Smith was a media executive and philanthropist who assisted Donald W. Reynolds in building the Donrey Media Group. As the leader of the Donald W. Reynolds Foundation, Smith’s generous support helped create the Reynolds Journalism Institute.

Smith Forum features 86 chairs at fixed tables and a lectern with microphones. The room is equipped with a projection video system, speakers for audio and wireless microphones for speakers. Events in Smith Forum can be recorded with the assistance of RJI’s production team.

RJI’s Lambert Room (Room 200A) was named in honor of Edward C. Lambert. After earning his doctorate in broadcast journalism at the University of Missouri School of Journalism, Lambert joined the faculty of the J-school and proposed bringing television to Central Missouri. On December 21, 1953, KOMU went on the air, with Lambert as its first general manager.

The Lambert Room features 34 chairs at 17 classroom-style tables. It has one projector and screen in the room, along with speakers for audio media. The room also has a lectern.

The Spencer Room (Room 200B) at RJI was named in honor of Dale Spencer, a professor at the Missouri School of Journalism for nearly 40 years, an editor at the Columbia Missourian and KOMU’s first weatherman.

The Spencer Room features 22 chairs at 11 classroom-style tables. It has one projector and screen, as well as speakers for audio. There is a lectern in the room.

Room 211 in RJI features 10 chairs around a conference table. It has one television which can be connected to using a VGA cable, and one dry erase board.

The Frank Lee Martin Journalism Library, located off the main lobby at the Reynolds Journalism Institute, houses the largest academic collection of journalism-related materials in the world. It is part of the University of Missouri library system.

As the journalism library moves into its second century its history melds with its future, providing the most technologically advanced tools, experiential and collaborative space (both physical and virtual) of any academic library operating today.