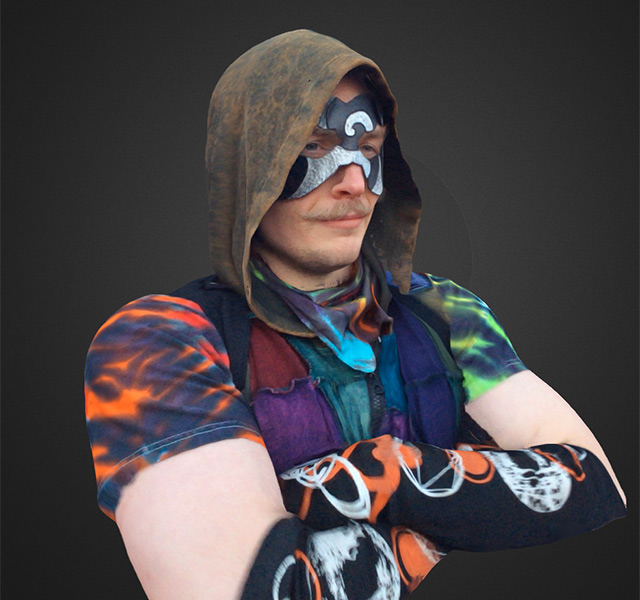 Two-dimension version of the scan of Matt Hall dressed as “The Patchwork Ninja.” Scan by Mike Krebs, Columbia Missourian

The Columbia Missourian took a new tack on “in-depth journalism” by offering its readers 3-D images of costumed participants in the True/False Film Fest in Columbia, Missouri.

Missourian photographer Mike Krebs used a Structure Sensor 3-D scanner from the MU3D project to create detailed images of festival participants just before the event and then shot a series of revelers as they prepared for the colorful True/False March March parade. True/False is an annual celebration of documentary film that draws thousands of people to Columbia.

The images produced by the scanner are intricately detailed and, when viewed on a computer, can be rotated, flipped and spun in any direction. The scans allow viewers to see the details of a Viking’s horns and the ominous hood of “The Patchwork Ninja.”

“We don’t yet know the optimum uses of scanners for news images, but the time is right to experiment,” said Clyde Bentley, an associate professor at the Missouri School of Journalism and one of the MU3D project directors.

Until recently, portable 3-D scanners cost tens of thousands of dollars. The Structure scanner and similar new devices use the power of an iPad to drive a sophisticated laser scanner — all for less than $500. Scanned images are uploaded to the Sketchfab 3-D social media site, then embedded in the newspaper’s website.

“The embeds work well on our website, although the originals on the Sketchfab site are somewhat sharper,” Bentley said, noting that the technology is still in its early stages. “The use of embeds of this type is much like the early use of YouTube embeds and will only get better.”

A primary goal of the MU3D project is to overcome the slow speed-to-publication issue that is a minor problem for cinema, architecture, science and other current 3-D users but critical in news coverage.

“They can take days or weeks to process an image,” Bentley said. “We have minutes.”

Because the scanning photographer must circle a motionless subject several times, the Structure process is slow. The technology is rapidly improving, though. “Instant scanning technology is already here, but costs $50,000 or more,” he said.

The MU3D project will continue to work with the Columbia Missourian and other news outlets to explore the potential of 3-D scans, television-accessible 3-D video and the new light-field photo technology.

MU3D is a Mizzou Advantage project that is exploring the possibilities of 3-D imaging for journalism. Joining Bentley in the project are Bimal Balakrishnan of the University of Missouri (MU) Department of Architectural Studies, who is also a 2014-2015 RJI Fellow; Bill Allen, who holds a joint appointment with the Missouri School of Journalism and the MU College of Agriculture; Prasad Calyam of the MU Department of Computer Science; Nathan Byrne of Newsy; and Reuben Stern of the Futures Lab at the Donald W. Reynolds Journalism Institute.