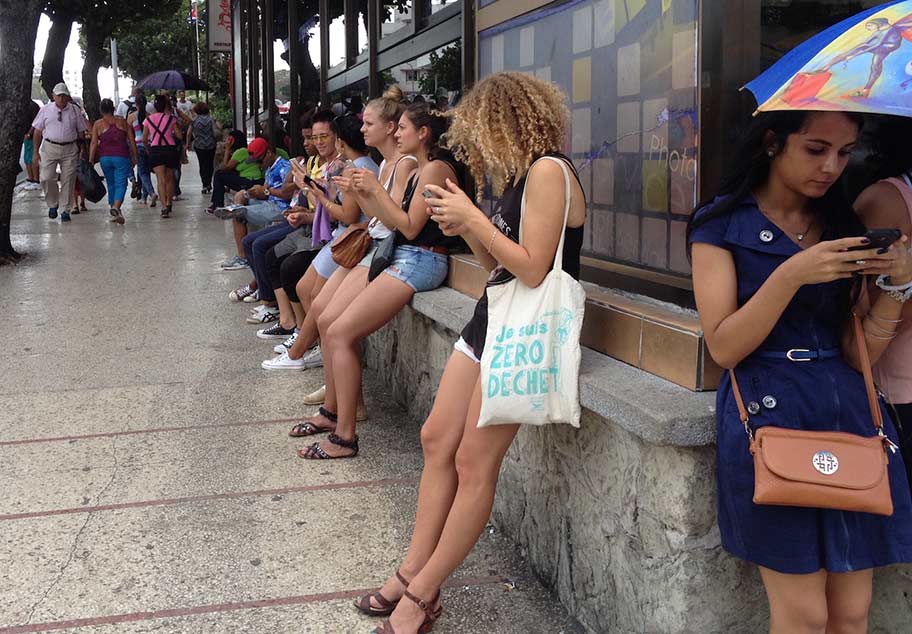 Cubans in Havana connecting to the Internet. Photo courtesy 14ymedio.

To connect, he first purchases an access card from ETECSA, the state-owned telecommunication company, at 2 CUC per hour of internet (10 percent of the average salary for a Cuban citizen). Then he goes to the only public Wi-Fi spot in town, a park that is a few miles from his house. He finds a spot on the crowded benches, pulls out his smartphone and types in the code from the access card into the login credentials. Finally, he’s online.

After he hits that button it’s as if he crossed a threshold into a new reality. For the next hour, he is mesmerized.

This past Sunday we chatted on Imo, a popular messaging app in Cuba. I walked him through the steps on how to create an email account, sign up for Facebook and use Google News.

We tried to see each other through a video chat, but the image froze. I sent him a link to a news article I wanted him to read, but the page was blocked. We both wanted to talk past the hour, but he could not afford it.

So we parted ways. He crossed the threshold back to no email, searches, digital news or online shopping — all things we, in the connected world, take for granted.

My cousin can be considered lucky for accessing the internet once a week. Most of the world population does not have access to even that. According to the International Telecommunication Union, approximately 3.9 billion people, more than half of the world’s population, are offline. In developing and least-developed countries, 60 percent and 75 percent of individuals, respectively, do not have access to the internet.

Regions of the world most affected by lower internet penetration rates are Africa, where nearly 75 percent are not online; Asia and the Pacific, where that figure is 58.1 percent; and the Arab States, where 58.4 percent of the population is offline. These are also the same regions where population growth is expected to be higher than in other parts of the world.

The challenge is clear: improve access to connectivity for the world’s least connected people.

Tackling the digital divide has been largely an issue that technology and telecommunication companies have been dealing with through various infrastructure and technology improvements.

Facebook’s internet.org has been partnering with telecommunication companies to bring the internet to the world’s most disconnected societies through its Free Basics program and Connectivity Lab. Google is also experimenting with services to get more people online. In the United States, it has launched Google Fiber, and abroad it’s working with telecommunication companies on Project Loon.

In the meantime, there are low-tech and low-cost solutions that can help the world’s disconnected become more connected through offline means. Digital media outlets can play a role in developing that technology.

Inspired by the challenges my cousin and millions of other Cubans face each day to connect to the internet, I’m working with a team of developers and Dale Musser, chief technology adviser at the Donald W. Reynolds Journalism Institute, to create a new mobile app for Cuba’s first independent news outlet that allows Cubans to read and share news offline.

We’ve begun doing some internal fixes to the app, and will begin beta testing in the coming weeks. Our tool won’t quite fix all the connectivity problems in Cuba. But it breaks with a convention: Being connected does not always require connectivity. As we move forward toward the age of the Internet of Things, going offline can also bridge the digital divide.