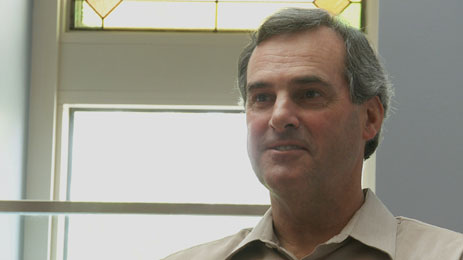 An interview with Sean Reily as he begins his fellowship year.

When the banking and real estate industries got clobbered in California, the Los Angeles Times, like every newspaper in America, felt the ripple effects. Revenues shrunk as fewer businesses placed employment or real estate ads. That meant sections shrank or disappeared, along with jobs in the newsroom.

“For any news organization that wants to still be standing 10 years from now, you have to look at where are the income streams to support the journalism,” says Sean Reily, director of editorial business and planning.

…the future of the business…how we can get there in the quickest, smoothest way…

Seeing the impact on the L.A. Times prompted Reily to apply for a 2009-2010 Donald W. Reynolds Fellowship. He plans to spend his year at Mizzou researching business models that will sustain traditional newspaper content on mobile devices such as Amazon.com’s Kindle or other e-readers.

“If I stayed just doing my day job, I’d spend my days bailing out a ship with too many leaks. Somebody has to look at where the future of the business is going to come from, and how we can get there in the quickest, smoothest way.”

To start his research, Reily plans to reach out to what other news organization are doing to get their work distributed to e-readers. He’ll also look at what Sony, Apple and other hardware manufacturers are doing to produce the next generation of devices.

As news media companies test alliances with different hardware companies, all publishers’ eyes will be on who’s making money and how. There’s no advertising capability in the early e-readers because there’s no color and the screens are pretty small. “The first thing advertisers need is enough people reading,” Reily says.

And for consumers, Reily thinks it has to be an “interactive experience that fulfills their wants,” not just a flat, static ad that you see in the print editions.

Reily comes to the fellowship with lots of experience in juggling the news and business side of publications. A UCLA English graduate, Reily first worked in magazine feature writing. Not content with just the writing job, he branched out in 1985 to found San Diego Metropolitan, a business journal publishing company that eventually grew to four different magazines in a decade.

After he sold the business, the Los Angeles Times recruited him to join the strategic planning staff. That job grew into his current role as director of editorial business and planning. In that role, he has chief financial officer duties, and is guiding the growth of the L.A. Times’ digital publishing formats and alliances.

His interest in e-readers goes back about a decade to when he worked with Microsoft and Roger Fidler on the first tablet computers. At the time Fidler was a journalism professor at Kent State University researching how newspapers might use the notebooks. Fidler is now program director of digital publishing at the Reynolds Journalism Institute.

“People actually like it both ways. They take the newspaper and read the sunday broadsheet at home, but on the subway, they want to read it electronically.”

Unlike the PC tablets, e-reader devices, along with net books, are gaining widespread acceptance with consumers. It remains to be seen how many readers migrate completely to electronic news. “People actually like it both ways. They take the newspaper and read the Sunday broadsheet at home, but on the subway, they want to read it electronically,” Reily says.