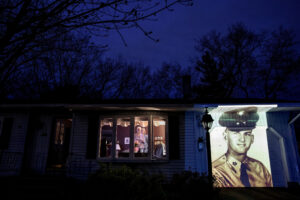 An image of veteran Francis Foley is projected onto the home of his wife, Dale Foley, left, as she looks out a window with their daughter, Keri Rutherford, in Chicopee, Mass., Wednesday, April 29, 2020. Foley, a U.S. Army veteran and resident of the Soldier’s Home in Holyoke, Mass., died from the COVID-19 virus at the age of 84. Foley never learned to read music but could play any song by ear. He loved a cup of coffee and something sweet from Dunkin’ Donuts. He kept the nurses at the home laughing. He was fiercely protective of his family. Ask his family about the man they lost, and the words flow easily about the card-carrying union carpenter, Army veteran, devoted husband of 54 years and father of four. “He was strong. He was funny. He was engaging. He was ornery. He was feisty,” his daughter, Keri, says. “He was still full of life. And then within days, he’s gone.”