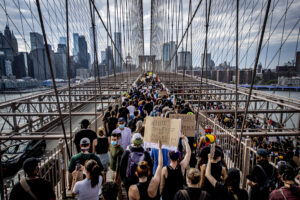 In the wake of the death of George Floyd at the hands of Police in Minneapolis, Anger and frustration boiled over into loud cries for justice. Protests against police brutality erupted both in big cities and small towns across the country. In New York City and its suburbs, Protestors, and allies of the Black Lives matter movement took to the streets. – Protestors march on the Brooklyn Bridge towards Manhattan after a memorial service for George Floyd, whose death in police custody, in Minneapolis, sparked nationwide protests and riots. Thursday June 4, 2020