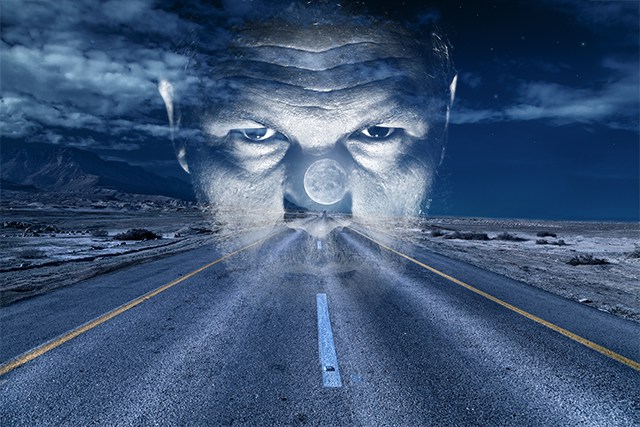 It’s been two years since I rolled out of Tucson, Arizona, and headed east on Interstate 10 toward the University of Missouri, a.k.a. Mizzou, my alma mater in Columbia, Missouri. Along with suitcases and camera gear from 30 years as a photojournalist, I brought audiobooks to pass the hours on cruise control. My first selection was George Orwell’s Nineteen Eighty-Four. I read it in high school and college and it had been haunting my thoughts during the years I studied the difficulties of preserving born-digital content as a master’s student at the University of Arizona. Contemplating the increasingly rapid loss of digitally produced journalism, I sensed a chilling parallel to the more deliberate erasure of evidence and suppression of memory in Orwell’s 1949 masterpiece.

As mile markers ticked by, the iconic saguaro cacti of the Sonoran desert gave way to the yucca and prickly pear of the higher, dryer Chihuahuan landscape of Southern New Mexico. I revisit Orwell’s dystopian vision with familiarity but also with a new purpose and perspective: that of the first Digital Curator of Journalism at the Donald W. Reynolds Journalism Institute (RJI), itself a recent creation of the world’s first and foremost journalism school at the University of Missouri.

Twilight stars pierce a velvet turquoise canopy above pastel mesas as I peer out my windshield into the Rio Grande Valley. Word after word, chapter after chapter, the totalitarian nation called Oceania (an amalgam of the Americas, Great Britain, Australia and others) is constructed in my head. Orwell’s dystopian language seizes my thoughts: Newspeak, thoughtcrime, Big Brother, doublethink, 2 + 2 = 5 and memory hole. That singular phrase, memory hole, catches my ear. The memory hole: dismal void, destroyer of evidence, denier of memory, executioner of truth.

The protagonist, Winston Smith, works in London at the Ministry of Truth (Minitrue) rewriting news articles, revising history in support of the ever-changing Party narrative. Newly written articles, doctored photos and other tampered evidence replace originals; previous documentation must be erased. The author describes the process:

“In the walls of the cubicle there were three orifices. To the right of the speakwrite, a small pneumatic tube for written messages, to the left, a larger one for newspapers; and in the side wall, within easy reach of Winston’s arm, a large oblong slit protected by a wire grating. This last was for the disposal of waste paper. Similar slits existed in thousands or tens of thousands throughout the building, not only in every room but at short intervals in every corridor. For some reason they were nicknamed memory holes. When one knew that any document was due for destruction, or even when one saw a scrap of waste paper lying about, it was an automatic action to lift the flap of the nearest memory hole and drop it in, whereupon it would be whirled away on a current of warm air to the enormous furnaces which were hidden somewhere in the recesses of the building.”

In extreme cases, Minitrue will “unperson” an individual: not just killing, but “vaporizing” them and all references to them from the historical record. Mention of their name or existence is forbidden, even to their families. Recall is a political act; memory is a threat against the Party.

I spend the night between the Rio Grande and the Sandia Mountains, in a place named after a Duke from the Spanish town of Alburquerque in 1706. Native Americans lived here on the banks of the big river thousands of years before that, leaving petroglyphs, pictographs and pottery shards to tell their story. “History is written by the winners,” Orwell mused. For now, the most recent inhabitants drop the first r and call this place Albuquerque. How will future generations piece together the tales of our time?

I set my GPS for Dallas, hit the I-40 on-ramp, don my earbuds and slip again into the Orwellian world of Airstrip One (formerly Britain), with its relentless anxiety, paranoia and repression. Winston recalls finding a photograph that proves the Party lied. Terrified, he shoves it into the Memory Hole, lest the Party suspect him of thinking his own thoughts, possessing personal truth, committing thoughtcrime.

Drawn toward the flame of rebellion, Winston contemplates the value of personal experience and the meaning of memories: “Where did that knowledge exist? Only in his own consciousness, which in any case must soon be annihilated. And if all others accepted the lie which the Party imposed — if all records told the same tale — then the lie passed into history and became truth. ‘Who controls the past,’ ran the Party slogan, ‘controls the future: who controls the present controls the past.’ And yet the past, though of its nature alterable, never had been altered. Whatever was true now was true from everlasting to everlasting. It was quite simple. All that was needed was an unending series of victories over your own memory.”

By Wichita Falls, Winston has been caught by the Thought Police. In the Ministry of Love, he endures tortures both physical and mental, ending in Room 101: the rats. With Fort Worth behind, the glowing night sky of Dallas ahead, our anti-hero betrays everything he believes in. He mistrusts, represses and empties his consciousness of even the most primal memories. In so doing, Winston at last loves Big Brother.

The 583 miles between Dallas and Columbia, Missouri, are low stress. I hardly slow down for Muskogee, Oklahoma; Joplin, Missouri; or the sprawling Ozark city of Springfield, Missouri. I’m lost in thoughts about memory, and what happens when we lose it. On the individual level, for instance with Alzheimer’s disease, we may lose the ability to connect with our past personality, knowledge, skills and relationships, which robs us of self-identity. Likewise, at the societal level, can we hold onto our common identity if we lose our cultural memory? Would the United States be the same nation if we had no record of the Continental Congress, the Declaration of Independence, the Civil War or the Civil Rights movement? OK, maybe that’s too easy. How about lesser-known events in history such as the arrival of Virginia’s new governor, Lord De La Warr in 1610 with a year’s worth of supplies that saved the fledgling colony for England? Otherwise, the French or Dutch might have colonized the southeastern U.S., tobacco might not have become a cash crop and the market for slaves might not have developed.

Want something more recent? How about the record of the Clinton-Lewinsky scandal that broke in 1998? It was one of the first examples of the news media publishing online before the story appeared in its print edition. Journalist/educator Ryan Thornburg, of the record of his work for the Washington Post on that story, bemoans the fact that “The time and manner in which they packaged and presented online, the live online discussions, the changes big and small to the wording — are almost totally lost. …”

At a more local level, what if we lost the history of our cities and towns? Why did we build that sewer plant when we did and why did we pay for it with municipal bonds? What did the school board candidates say about funding art, music or athletics during their last campaign? Accurate firsthand accounts of where we came from and why we did what we did can lead us to a deeper understanding of who we need to become and what we need to do next to get there — or help us decide whom should we vote for or against in the next election.

What about more personal histories? The stories of our ancestors are fertile ground for understanding our own identity today. Knowing our family’s health history can provide life-saving information for our own benefit and that of our children. The fact that my parents experienced the Great Depression during their childhood forever altered their – and subsequently my – financial outlook. Today, we can learn a great deal about how people adapted to that circumstance from the newspapers of the day, and about how journalism shaped how we chose to respond to that crisis. Will our children or grandchildren have access to a complete record of how we acted and reacted to the Great Recession of 2007-2009? It’s unlikely.

Today, we are faced with a Memory Hole of our own making. Largely unintentional, our Memory Hole is just as real and terrifying as the black slits in the walls of Orwell’s Minitrue. Perhaps more so, given that broad swaths of our cultural memory, including and especially digital news content, are being swallowed silently by a bottomless digital furnace with no off switch. All that is required to lose our contemporary cultural memory is inaction. Preserving the binary graphic record requires an unending series of victories over digital decay.