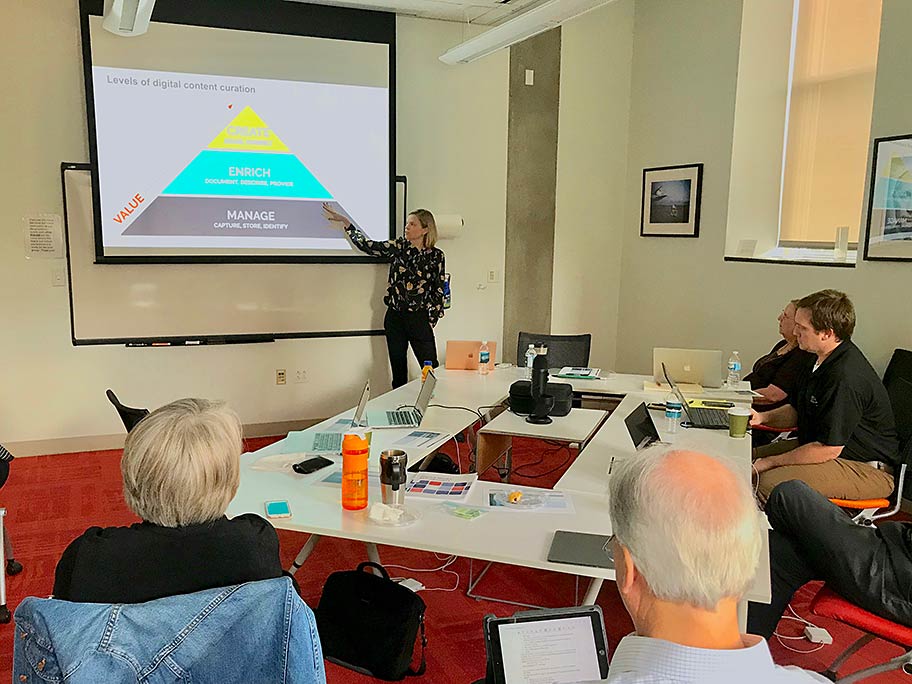 What if future generations never got the chance to hear recordings of Martin Luther King’s “I Have a Dream” speech? Or if news stories and footage of 9/11 were lost to history?

While it might seem ludicrous to imagine losing such key moments of history, the truth is that many news organizations are struggling to preserve digital files of stories, recordings and video. Though technology has advanced greatly, many historians and news organizations are trying to find new ways to organize their digital archives and store them safely.

Now, a team at the University of Missouri is working to help preserve history.

Taking on a thorny challenge

The Donald W. Reynolds Journalism Institute (RJI) and University of Missouri Libraries received a $250,000 grant this fall from The Andrew W. Mellon Foundation to help ensure the survival of today’s digital news record for future generations.

During a yearlong project, a team from the Journalism Digital News Archive, a joint initiative of RJI and University Libraries, plans to visit news outlets across the U.S. and Europe. Edward McCain, digital curator of journalism at RJI and the MU Libraries, said that during these visits, the team will identify what’s hampering the process of preserving online content by examining the outlets’ technology, workflows and policies.

“Born-digital content”, or content which originates from computer chips or digital sensors, can disappear forever or become inaccessible if not preserved because of several factors. These include a lack of policies, technology failures, obsolete technologies, newsroom closures and ransomware strikes. As content becomes more technologically complex, such as journalism reports stored in digital databases, the industry needs a set of best practices to keep content accessible in the future.

McCain said the team will produce a report highlighting what they learn, including best practices for properly providing long-term access to digital news archives.

“The preservation of digital media continues to be a priority of the Scholarly Communications program at Mellon,” said Patricia Hswe, program officer at The Mellon Foundation. “Our efforts in audiovisual preservation, web archiving and software curation all speak to concerns for the long-term availability of cultural heritage content and documentary evidence, both of which are crucial to humanities scholarship. The preservation of online news content, particularly as news outlets flourish and fail, is a particularly thorny challenge, and the grant to the University of Missouri will help the foundation understand much better what the priorities for support should be.”

The team will consist of about 10 researchers, including individuals from MU Libraries, the Missouri School of Journalism and outside consultants such as AVP (formerly AVPreserve) and RJI Fellow Neil Mara, who previously worked at The McClatchy Company. Mara’s research at RJI focuses on innovative ideas that leverage a newsroom’s archived content, particularly content with a potential return on investment or ROI. Mara said he wants to demonstrate the value of past news content to readers to incentivize preservation.

“The track record for saving digital news hasn’t been that great for the news industry, but we at RJI believe there’s light at the end of the tunnel,” said Randy Picht, executive director of the Reynolds Journalism Institute. “We’re looking forward to finding that light and a whole lot more thanks to our friends at The Mellon Foundation.”

“We are grateful for this support from The Mellon Foundation to help Mizzou archive the all-important first drafts of history as reported in the digital age,” said Ann Riley, vice provost for libraries and university librarian at the MU University Libraries.

This project builds on work done during the Journalism Digital News Archive’s five Dodging the Memory Hole conferences, which brought together librarians, memory institutions, newsroom leaders and others between 2014 and 2017 to have conversations about how to preserve and protect “the first rough draft of history.”

However, McCain said it became apparent that there was a need to engage more directly with news outlets that produce and own the content.

“What they decide to do with digital news content is critical to the survival of it,” McCain said. “If news content doesn’t make it beyond the life of the news outlet or if it doesn’t make it to the scholarly record, then all of our efforts are lost. It doesn’t matter how many libraries and archives are there to help, if the content disappears before the memory institutions get it, there’s nothing they can do. That historical record is gone.”