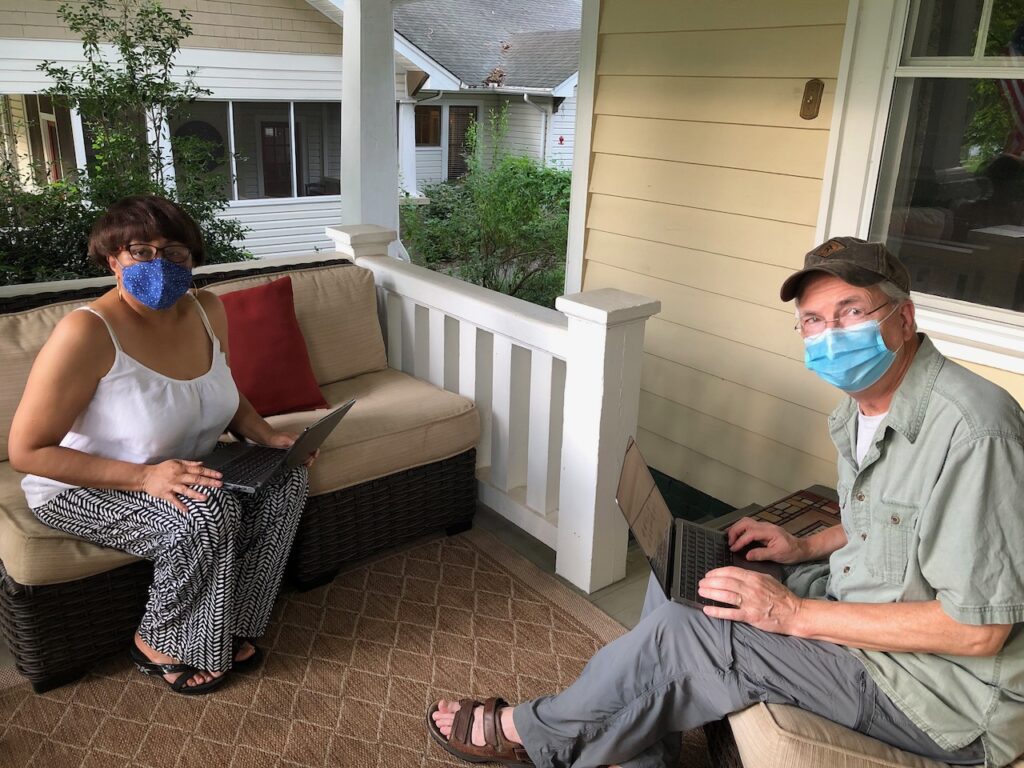 Myself and Neil Mara brainstorming about our respective RJI projects

When I proposed my hands-on diversity training program for newsrooms, I thought getting media partners on board would be the biggest challenge. I have been pleasantly surprised at the interest and willingness to participate, but overwhelmed by the need for this project which is in even greater demand because of this seminal moment.

In my first group meeting with media partnersNorth Carolina Health News,WFAE and the Charlotte Observer, each editor provided helpful and constructive input. We started by laying out the obstacles we need to overcome with the reporters themselves.

Too rolodex-reliant. Sherry Chisenhall, President and editor of the Charlotte Observer, says her seasoned reporters get into the habit of calling the same sources over and over because they have their direct phone numbers. They know they’ll always call back and give a good quote.

On the other end of the spectrum is new reporters who are working without a network because they haven’t built one yet. They are often new to the area and don’t know anyone yet. Their solution, Editors said, is often to ask long time reporters for contacts, which reinforces the habit we hope to break.

Reacting instead of reporting

Good beat reporters take time to engage with and gain a deeper understanding of the people in the community they serve. This doesn’t always feel possible when journalism is increasingly driven by technology and social media. Reporters may tend to be more reactive to events, instead of unearthing new stories through regular engagement with their community. “Fundamentally, we don’t really try to understand the communities because we are so focused on the next deadline,” says Ju-Don Marshall, WFAE content director. Reporting during a pandemic has only exacerbated this problem.

“Diverse” but not different

Charlotte Talks, WFAE’s public affairs program, makes an effort to include diverse guests and panelists. But Marshall says it still relies too much on the same voices repeatedly. “I am always saying ‘I’m tired of hearing from the same people. How do we vary that?’ But, the concerns are ‘we know this person, they know what they’re talking about and they actually sound good on the radio.’” So we plan to extend that circle by asking our regular contributors who they know that would be a new and engaging voice.

Getting past the gatekeepers

Rose Hoban says, because healthcare reporting needs expert opinions, journalists have to find ways to get past the institutional gatekeepers to make their source list more inclusive. As an example, last month I specifically asked the state’s largest healthcare system for a  black, Indigenous and/or person of color (also known as BIPOC) or female nephrologist or transplant doctor. Twice, they came back to me with a white male without ever acknowledging my request.

Some experts are so used to seeing other people from their institutions quoted, they may say they’re not qualified to speak on this subject and decline the interview. While I don’t hesitate to explain why they are indeed an authoritative voice, many younger reporters may be reluctant to push back.

Where we go next

I am creating a survey to evaluate what journalists already feel about this subject and to gather information on any diversity in media training they’ve already had. This goal is to lead us to what the best next steps are to help them succeed.

Information gleaned from the surveys will inform the curriculum. Instead of waiting until the end of the project to share training materials, I will use my monthly pieces and pop-up newsletters to disseminate information. This will keep the journalists engaged in the project without overloading them with work.

My media partners clearly understand this problem and are eager to tackle it. We know that since we’ve been unable to resolve this after years and years, it will take true structural and cultural change in newsrooms to move forward.