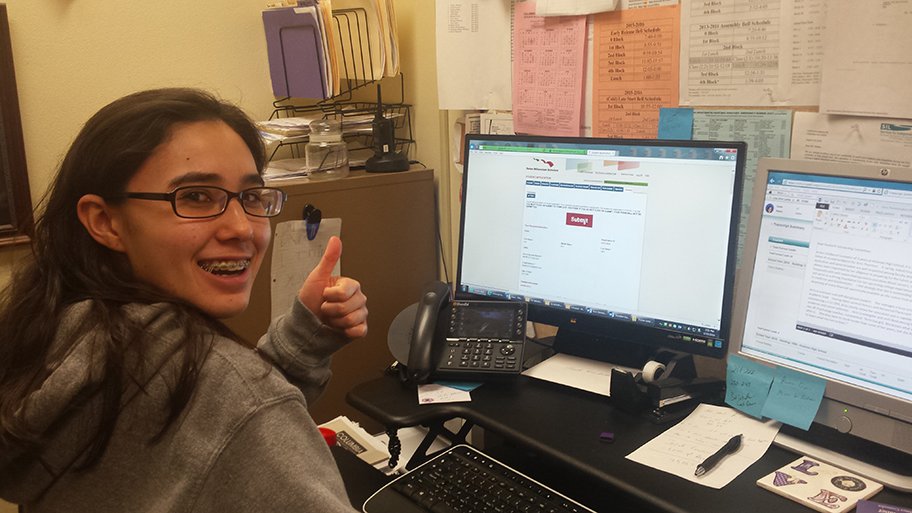 They arrived early on a Saturday morning — not the usual hour for teenagers — and found the only open door along the quiet, cavernous hallway of an empty Hickman High School in Columbia, Missouri. Stomping snow from boots and rubbing chilled hands together, they found us in the media center and sat down, one by one, at the lit computer screen.

Three and a half months had led to this moment: By pushing the submit button on the most important application of their bright, young lives, the Gates Millennium Scholarship (GMS) — which funds 1,000 college students for 10 years of higher education — might now become theirs.

One computer. One flash drive loaded with eight carefully written (and oft edited) personal essays. One red button blazoned with the word “SUBMIT.” The Hickman seniors laughed at the drama of what looked like an over-exaggerated red button in an action movie. But the magnitude of each click seemed fitting after their months of hard work.

A round of applause from the spectators — “You did it!” — then each teen grabbed a piece of leftover cake, the word “winner” disappearing with each slice gone, and returned to their parents who were idling in the circle drive. When all 10 students had submitted and departed, our small group of witnesses, who had nudged — and sometimes shoved — them forward toward the deadline, looked at each other and asked the same question: “What’s next?”

Halfway through my fellowship year, my Talk Story, Write Story demonstration project has achieved one of its two goals: 10 generous-spirited Columbia volunteer writing coaches enhanced 10 financially challenged multicultural students’ chances of winning scholarships to pay for college. (Next up: Growing Talk Story, Write Story into a program embraced by civic-minded newspapers and their communities around the country.)

This 100 percent accomplishment was the culmination of months of one-on-one mentoring at least twice a week in various Hickman conference rooms to talk out their stories, then write them down.

When my husband, Dean Wariner, and I brought Talk Story, Write Story to Columbia in September, we had no playbook or blueprint about how to make using community mentors work. For nearly two decades I had tutored by myself, and then with Dean, to help students in Hawaii and Alaska apply for scholarships. In eight years, 15 of “our” kids had won Gates Millennium Scholarships.

But I had a hunch that big-hearted folks anywhere, if offered the chance, would step up to help worthy kids go to college. Columbia offered me a chance to prove it. I specifically looked for mentors with newsgathering backgrounds because they combined strong storytelling abilities with deadline rigor. Of the 10 volunteers, five were journalists; four mentors held Ph.D.s.

Hickman Guidance Counselor Todd Maher didn’t hesitate to take on what became a second full-time job, without pay, pulling together the Talk Story, Write Story pieces for some of his best seniors. With University of Missouri graduate student Jordan Reith as his assistant, and Hickman office manager Sharon Dothage as his chief traffic cop, he tracked the jigsaw puzzle of room assignments, organized academic pep rallies, and kept mentor-student pairs moving for three months. Some writing sessions started as early as 7 a.m. and as late as 4:30 p.m. Nobody ever got double-booked.

The journalist mentors, along with three veteran educators and two businessmen — one was also a farmer — helped students with writing and editing, offered time and stress management tips, brought snacks and juice to boost their flagging energy, and kept up constant encouragement. As round-the-clock cheerleaders, some were online with their student well past midnight and way before breakfast. With the submission deadline approaching, Sunday became just another meeting day.

The primary goal was completing the 20-page Gates scholarship application, among the toughest in the nation, with special emphasis on crafting the best answers to eight complex essay questions. That meant up to 10 drafts for each question. It was exhausting perfectionism.

The unexpected bonus was the evolving partnership between mentor and student. Teens began to trust adults with stories they had kept hidden, even from their peers and friends. Adults who had signed on to fulfill a civic duty looked forward to lively sessions with bright young scholars soldiering on through tough times.

October’s strangers became January’s friends. This transformation is Talk Story, Write Story’s beating heart. It proves that volunteer writing coaches anywhere in America can work under the auspices of a community newspaper to achieve the success Columbia mentors did this year.

This project did not cost the Tribune a penny. RJI generously sprung for eight pizzas, six-dozen cookies, 40 sandwiches, sodas, water bottles and a huge sheet cake on Gates submission day.

My demonstration project continues until late March. Students will keep working with mentors to apply for more scholarships because putting all their eggs in the Gates scholarship basket is vehemently discouraged.

Known as the “million-dollar scholarship” since its inception 19 years ago, this is the 20th and last time the Gates will be awarded. Those who write well — who show and not just tell — will be the 1,000 lucky ones chosen as this year’s “leaders of tomorrow.”

Of the estimated 3.2 million American high school seniors in the class of 2016, more than 60,000 were expected to apply for the Gates. Applicants must have a 3.3 cumulative grade point average, qualify for a federal Pell Grant based on family income, and be an American citizen of African American/black, American Indian, Alaska Native, Asian Pacific Islander American or Hispanic American ethnicity.

Eight of the nine female Hickman students chasing the Gates say they will pursue medical careers. Five hope to become doctors. A sixth dreams of being a dentist. A seventh will major in physical therapy. The eighth is determined to be a veterinarian. The ninth female applicant plans to join the Peace Corps with a degree in global studies.

The sole male applicant already has taught himself three languages and has mastered five. He hopes to earn a doctorate from Yale University’s world-famous linguistics department.

GMS winners will be announced in mid-to-late April. Already, as the icing on the kids’ celebratory cake proclaimed, “You are all winners.”

Interested in doing this in your own community? Send a note to Tad Bartimus at hanagirl@aol.com.