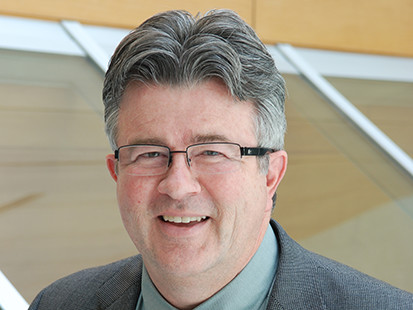 Edward McCain was deeply concerned as he watched the Tucson (Ariz.) Citizen, a newspaper he had once worked for, close its doors without a good system in place to preserve and access its print or online archives.

As he discussed the fate of the Citizen’s archive with editors, reporters, librarians and archivists, he realized that the current model of news preservation was failing. He was inspired to take steps to protect digital and print archives from being lost permanently.

“So much of our cultural heritage is captured in a news archive,” he said. “News has been called the first rough-draft of history and once we lose a news archive, we lose a prime source of where we came from as a community and a nation.”

Starting this summer, McCain will be able to do more than worry about the complex issue. He has been named to a new position, jointly funded by the Donald W. Reynolds Journalism Institute and MU Libraries, of digital curator.

McCain will work with colleagues in the industry and at the University of Missouri to find the most efficient, most long lasting ways to preserve all types of content and to find ways to generate revenue using the preserved content.

“We’re fortunate to have someone like Ed who is so passionate and dedicated to the cause,” added Randy Picht, executive director of the RJI.

McCain, who began his new assignment on July 29, is looking forward to his role as facilitator, organizer, cheerleader and pilot all rolled into one.

MU’s need for a curator

Two years ago RJI hosted The Newspaper Archive Summit to begin a conversation about the state of newspaper archives.

More than 30 scholars, journalists, newspaper publishers, librarians, digital archivists, and digital newspaper vendors were among the speakers. Local conversations continuing after the Summit led to the decision to hire a digital curator who understood journalism.

“We needed someone to help each of our outlets (Columbia Missourian, KOMU-TV and KBIA-FM radio) and the school understand how to manage and preserve the assets,” said Dorothy Carner, head of journalism libraries at the University of Missouri. “We were afraid a lot of the assets would just disappear if we didn’t start preserving them.”

Archivists also have to take into consideration how to protect content in a way that will be accessible to users in years to come as technology platforms continue to evolve and change.

Local media will serve as prototype

McCain is reaching out to faculty and staff at the Columbia Missourian, KBIA and KOMU –local media outlets – to learn about their needs, technological configurations and functionality requirements in order to determine how to best preserve the archives. Working with local media will include discussions about what material should be kept and what can be discarded because of economic considerations. He will also be working with Pictures of the Year International (POYi) to preserve photo collections.

Curating content for these local media will serve as a prototype for digital news preservation across the news industry.

McCain’s experience and enthusiasm make him a great match

About the same time that the Citizen closed its doors, McCain was earning his Master’s Degree in Information Resources and Library Science along with a Certificate in Digital Information Management. His combined interests in journalism, archives and preserving digital media led McCain to his interest in digital curation, which is intended to provide access and to preserve digital content including text, photos, videos and other digital media.

He also has more than 30 years of experience working as a freelance photographer and magazine/newspaper photojournalist.

However, his interest extends into all facets of the news media industry. Even though television and radio are doing better financially than newspapers, many of the same technological dynamics exist in terms of at-risk news media collections that depend on digital content, said McCain.

“I think digital archives present us with unique opportunity to provide access to rich media content that will enhance the future generation’s understanding of our collective heritage,” said McCain. “I’m especially interested in preservation and access to news collections from the past 40 years during which we’ve experienced a significant transition from print to electronic media.”