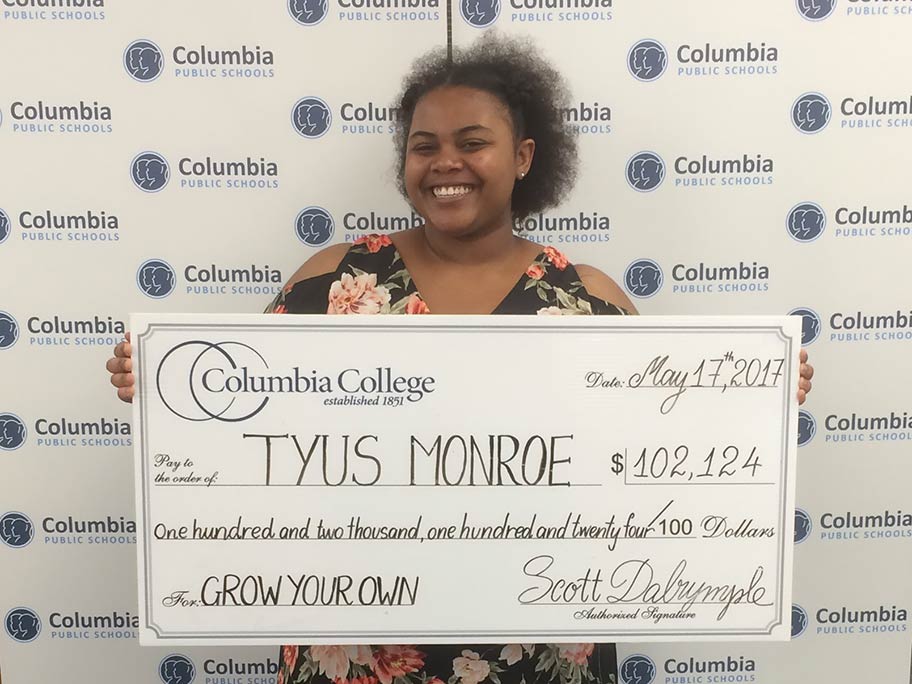 Tyus Monroe is a 2017 graduate of Hickman High School in Columbia, Missouri. She believes teachers aren’t engaging young black male students as much as other kids. That’s why she wants to become a teacher.

“If I can do my part to get more black males in the graduating class, I’m going to do that by any means necessary,” she says. “I’ll spend my money on these kids. I’ll spend my time with these kids.”

Monroe received a full-ride scholarship to Columbia College in Missouri, thanks in part to Talk Story, Write Story, the scholarship application-writing and mentorship program. TS,WS pairs financially challenged, diverse students like Monroe with a mentor to help them share their life stories in scholarship essays. Journalist Tad Bartimus launched this version of the program at Hickman during the 2015–2016 school year as part of her fellowship at the Donald W. Reynolds Journalism Institute. The Hickman program is based on her program’s success in Alaska and Hawaii.

Monroe was raised by a single mother with three children to support. Paying for college, without help, would have been difficult. Knowing how hard her mom works pushed Monroe to work part-time when she could.

Seeing “a lot of potential in her,” then Hickman school counselor Todd Maher selected Monroe to participate in the TS,WS program.

“She just needed someone to believe in her and continue to support and push her,” he says.

Monroe was paired with mentor Erik Potter, a writer at Mizzou Magazine, the University of Missouri’s alumni magazine.

They met twice a week before school from September 2016 through February 2017 putting Monroe’s life down on paper and improving her essays.

Potter says Monroe was already a gifted creative writer when he met her so he worked with her to be more specific in her essay answers.

Monroe says she’s grateful for the time Potter spent with her because she knows he’s helped her develop skills she’ll use throughout college and as a teacher.

Monroe has a bright future in front of her.

When she receives her teaching certificate, she’s guaranteed a job at Columbia Public Schools as part of the CPS Grow Our Own Teacher Development Program. The initiative targets minority students who want to become teachers in an effort to diversify the school’s faculty. Students who are part of the program also intern as a teacher’s assistant during summer school. Monroe held internships during the past two summers.

Maher, who oversaw the Columbia program, is now with Winnetonka High School in North Kansas City, Missouri. He hopes to launch TS,WS there at a later date.

Leigh Spence, director of counseling at Battle High School in Columbia, was motivated by Hickman’s TS,WS and in 2016 started a similar initiative called Spartan Scholars. The Battle program is tweaked to include a lower GPA requirement of 2.5 for students.

“We were totally inspired and encouraged by the program Hickman did,” she says. “We knew our kids could very much benefit from other adults in their lives, encouraging and pushing them along the way.”

The seven students in the Spartan Scholars program during the 2016–2017 school year qualified for $132,000 in scholarships.

When Bartimus launched TS,WS in Columbia, she recruited volunteers with experience in journalism. Among the mentors that year were a columnist from the Columbia Daily Tribune, which was a program partner, and faculty from the Missouri School of Journalism.

To learn how your news organization could help launch TS,WS in your community, contact Melody Bezenek, Missouri Press Foundation, at mbezenek@socket.net or 573-449-4167.