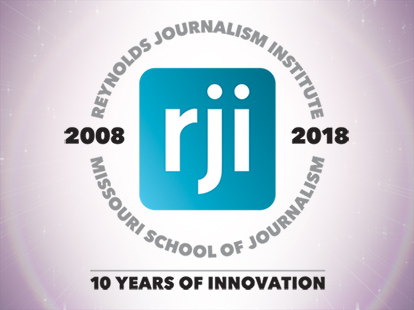 RJI is the place where good ideas for the news and strategic communications industries come to get sketched out, thought through, tried out and shared as widely as possible. This happens through RJI fellowships, startup investments, student-led projects and rigorous academic research.

To learn more about these and other RJI initiatives, and to learn how you can get involved, check out our 10-year anniversary publication.

In addition, as part of the anniversary celebration, RJI conducted a series of thought leader interviews on a variety of innovative topics (see below). Included on the list were Shailesh Prakash of The Washington Post; Cheryl Thompson, president of IRE (Investigative Reporters and Editors); Michelle Holmes, vice president of Alabama Media Group; and Jim Brady, founder and CEO of Spirited Media, Inc.

Also, be sure to check out our “Salute to Fellows,” a collection of stories about RJI’s fellowship program and how a few of the 80 fellows have helped journalism get stronger.

RJI is excited to be on the scene and is looking forward to the next 10 years of innovation in journalism, and beyond. The future is now!

The RJI 10th Anniversary video series was filmed by Brian Feulner, and edited by Kat Duncan and Travis McMillen.