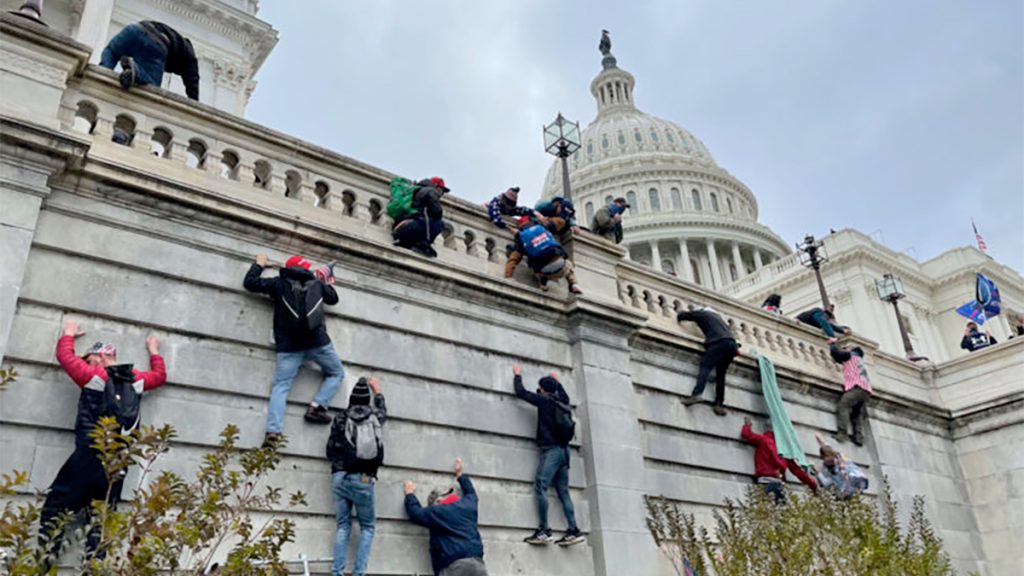 The United States Capitol Building in Washington, D.C. was breached by thousands of protesters on Jan. 6, 2021, during a "Stop The Steal" rally, protesting the election of Joseph Biden over President Donald Trump. On Dec. 23, 2021, former President Trump filed a request with the U.S. Supreme Court to block a Congressional request to review records from the Jan. 6 attack, arguing executive privilege. File Photo via AP: zz/STRF/STAR MAX/IPx 2021 1/6/21

A team from The Washington Post re-reported and retold the Jan. 6, 2021, assault on the U.S. Capitol with classic, credible and compelling journalism

This article first appeared on Nieman Storyboard on Jan. 4.

At the end of each semester, after all the discussions of craft, I remind my reporting students at the Missouri School of Journalism the why of it all: the larger purpose their journalism serves. By then they have become so immersed — sometimes overwhelmed — in assignments that their focus has narrowed to the point that there’s a haze around their oxygen-starved corneas. So we read, in the round, the words of James W. Carey in his address to an incoming class of Columbia University journalism grad students. It’s called The Struggle Against Forgetting.

Carey cites the author Milan Kundera, who posits that humankind’s struggle against power is the struggle of memory against forgetting. By that, Carey means a collective memory, a common understanding of what has transpired so that we may move forward as a larger community. “That which goes unrecorded goes unpreserved except in the vanishing moment of our individual lives,” Carey writes:

As citizens, we have been enjoined in a great national struggle as to whether the American experiment can continue without a set of shared facts, as evidenced by the attempt to overturn the election of the president in November 2020 and powered by The Big Lie, uttered even before the first vote was cast, that the system was rigged to throw out Donald J. Trump. The Lie’s excruciating outcome, then and now, is the threat of violence — and the threat made real.

As we have rolled inexorably to one of our saddest anniversaries, the assault on the Capitol on Jan. 6, 2020, it’s a good time to take stock.

I haven’t read all the miles of material written about that day, when organized rioters helped push the rest of the mob into the building and to the doors where the House and Senate had been sitting minutes before a chaotic evacuation. Publications have pushed out millions of words, from searing retrospectives to investigations to predictive essays.

The Washington Post has treated the insurrection as a local newspaper should, covering every development during and since in real time. If you find it hard to keep up, as I do, I recommend dialing back to The Post’s blockbuster series, “The Attack.” The book-length story, published Oct. 31 and organized by “Before, During and After” the incursion, does what good storytelling should: bring together many disparate pieces into a coherent whole.

Consider the task of the reporters, writers, designers, photographers and editors who delivered “The Attack:” Hundreds of interviews and thousands of documents, videos and audio recordings, all collected and analyzed by 75 journalists over six months. An Everest of work, all in need of sifting, organizing, prioritizing and producing. Newspapers bow to their working-class roots. Thus, those writers aren’t singled out as they might be in magazines; that distinction goes to a select few lead-writer bylines, with the dozens who contributed listed in an “About the Story” box. I remember, as a newspaper editor, sending out more than a dozen reporters to cover breaking stories knowing that the only way to truly make sense of all the information flowing in was through the hands of one or two writers (regardless of whether they were called reporters or editors). Everyone who touched this project deserves stand-out credit.

The revelations were many, encapsulated in a bulleted “key findings” summary atop the series: Alerts were raised and ignored or discounted; fears around “optics” kept the National Guard in the background; a network of intelligence centers, formed after 9/11, raised the red flag, “but federal agencies did not show much interest in its information;” the president resisted calls from his own party leaders to urge the rioters to disperse while his attorney continued haranguing Vice President Mike Pence throughout the afternoon and evening to reject electors and throw the election back to the states — the list goes on.

Particularly harrowing: the nasty, awful threats election officials continue to receive, and the fact that they “spiked immediately after the former president and his allies raised new claims.”

Summary findings are useful to readers, but can leave even more pressure on the storyteller. The Post series succeeded in holding my attention, though. There are many reasons. These three rise to the top for me:

Fiction writers can control time, condensing and expanding it to fit the demands of scene and plot. Non-fiction writers don’t have that luxury. We create arbitrary time frames — the anniversary being one of the most common (thus this essay) — but they are bound by the events and the people that actually experienced them.

The Post created timelines that fit the narrative. It was deceptively simple: before, during, after. Note, though, that the timeline for each day isn’t cut up into traditional calendar divisions (e.g. six months before, three months before, etc.) but into high water marks in the story. We begin 102 days Before, then move forward 39 days, then 10 days, then five, then 12. Those divisions correspond to an extraordinary meeting of regional homeland security offices, to the morning after the election, when Trump falsely claimed that the election was rigged, to increasingly radical plans for a national “Million MAGA March,” to Trump’s naming of Rudy Giuliani and Sydney Powell as agitators in chief, to Attorney General William P. Barr’s interview with the Associated Press in which he declared the Justice Department couldn’t find enough fraud to affect the election’s outcome.

The second and third parts — During and After — maintain their own logic as well. The actual times, whether days or minutes, matter less than the structural mandate that each works on its own, but also in service of a greater whole. I originally came to the series by reading the last day and was perfectly satisfied; there weren’t missing holes created by not yet reading the first two days. I felt the same way in reading the series straight through. That’s incredibly hard to do.

If I were a writing contest judge and had the choice, I would plop this series in news or community service, not feature. But I found gold coins along the path that sparkled in the development of characters, some very public, some unknown to the average reader.

The introduction to some of these characters comes within some heavy news moments. We meet Paul Hodgkins, a 38-year-old crane operator who voted for Barack Obama in 2008. We see him drift into radicalization in the backdrop of a September debate in which Trump hinted that the election could be determined by Congress. Hodgkins will become the first person with a felony conviction for his part in the attack. He’ll apologize and promise reform and finally return to his starting place as staunch Trump supporter. We see Capitol Police Capt. Carneysha Mendoza on the front lines of a Nov. 14 pro-Trump march, pinned in the middle of insurgents in the Capitol on Jan. 6, and later trying to explain it all to Congress and to her 10-year-old son a month later. We watch as Rep. Liz Cheney, R-Wyoming, hires private security in preparation for Jan. 6, and as Clint Hickman, an Arizona egg farmer and Maricopa County supervisor, flees his home the next day due to threats against him and his family.

These little peeks into people’s lives propel the story forward more than any other characteristic.

The series is an investment of time for the reader, but the editors did us a great service in using digital tools to help get some of the more clunky parts out of the way. They call them footnotes; I’d describe them as hypernotes, because you click on each number to reveal the information. Much of it is simple attribution (“this account of Nichols’s online posts is drawn from court documents”) or explanation (“Fann did not respond to requests for comment”). They are the kinds of things narrative writers are tempted to drop completely because they get in the way of fluid storytelling. But The Post lets the story move and lives up to its obligations of accountability and transparency. (Every story in every newspaper should be doing this, but we’ll have to let big series at big papers with great content management systems show the way for now.)

Also, video and audio clips serve as direct attribution to the narrative and allow more expansive quotes than would be desirable in words. Some of the audio clips of radicals threatening election officials (“we’re coming for you, b—” … “we’re gonna try you and we’re gonna convict your piece of s— a– and we’re gonna hang you”) are harrowing and distressing for the future of our democracy.

In a letter to readers, Post Executive Editor Sally Buzbee wrote that the project began after Congress failed in efforts to create a bipartisan panel to investigate the attack. A committee would be formed, eventually, and it continues to jackhammer information from recalcitrant former Trump administration officials and current members of Congress.

It’s important work. The drumbeat of The Big Lie continues, and if you believe the election was stolen then maybe it’s not so far-fetched to believe that patriots should take over the nation’s Capitol. A Post-University of Maryland poll released this week says 1 in 3 Americans think violent action against the government can be legitimate. “The Attack” series shows how quickly we can devolve from patriotic dissent and discussion to insurrection. I return, for a moment, to James Carey:

The struggle against forgetting — the struggle for democratic life — continues. Telling true stories is critical to our collective future.