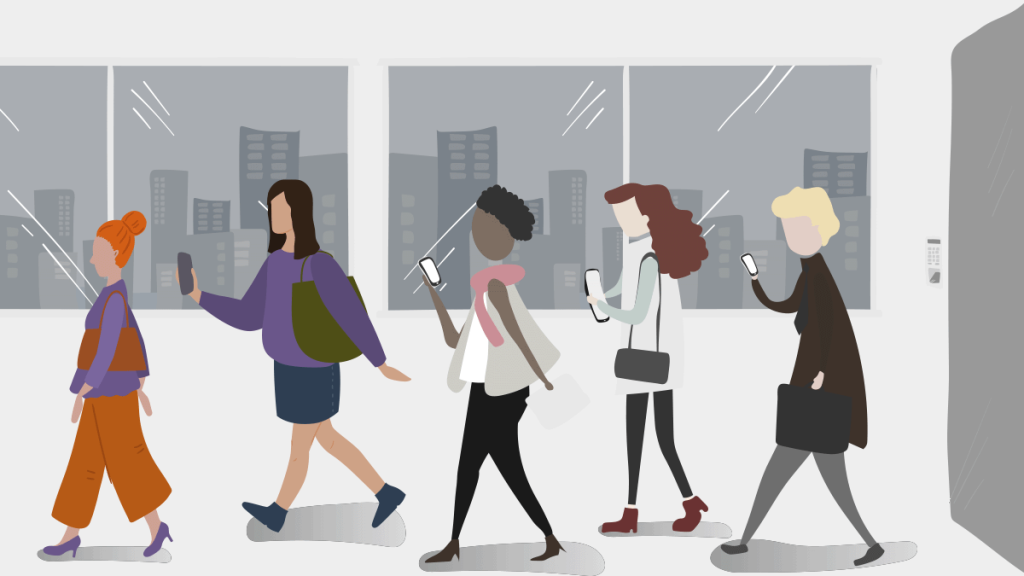 Kaili Ward conducted this research project as part of her work to earn a master’s degree from the Missouri School of Journalism. Kaili is a former multimedia journalist who currently works in the public relations industry.

She didn’t sign up for this. As a TV journalist, she had qualified for food stamps and low-income housing. Her childhood dream was not what she anticipated: “I grew up watching my local news, idolizing my local news anchors. And then when I was an anchor, I was like, ‘this is what I signed up for?’”

She’s not the only one. The presence of a Facebook group with 4,500 participants of former women television journalists who are in public relations highlights the severity of the resignation in television news. Recent journalism and communication research shows that women are more likely to leave the journalism industry before their male coworkers, and gender discrimination and burnout are elements that impact women journalists’ decisions to change careers.

These women have described their observations of the great resignation in television news as an “exodus.”

The television news industry needs its women professionals to last in the industry. Simply put, allowing women to age in the industry allows them to connect better with their viewing audiences. Too often, that’s not happening.

The study confirms the importance of work-life balance. Specifically, the industry needs to establish a family-friendly work environment, understand the physical, mental, and emotional tolls of the multimedia journalist role, recognize the need to unplug, and provide mental health support.

As a parent in television news, Anna often struggled to take a day off when her child was sick because her station was frequently understaffed.

Hazel explained that her current workplace — not a TV station — values her more as a working parent than when she was a television journalist. “Now I’m here and like, you know, they value everyone I work with,” she said. “And I think part of that is like very few people in news have kids… you get to a certain age and it’s either like stay in news and don’t have kids or get out of news.” Without the flexibility to manage families and work, the industry may not succeed in retaining women professionals in the future.

Recognize the impacts of the multimedia journalist role

Participants who were multimedia journalists were overly stressed, overly worked, and understaffed with high expectations. Ivy suggests limiting the responsibilities of the role, especially for women journalists: “Maybe if you want to do feature stories here and there because I did grow to love shooting my own video, and I love editing, but there’s just no reason for you to be doing hard news by yourself.”

All participants said the shortage of resources and quality of news standards contributed to their decision to leave television news. “You can’t have one person doing three people’s jobs,” Bailey said. “Because first of all, they’re underpaid. Second of all, they’re going to burn out so quickly. Third of all, you’re going to have horrible quality, because it’s just there is a churn.”

“I feel like women on-air talent also need therapy,” Karter said. “They need onsite counselors, or they need someone to foot the bill for therapy because therapy is expensive, and journalists need it as much as anyone.” Since switching to public relations, Julia’s mental health has improved significantly. “It just made me realize how badly I needed to make this transition,” she said. The industry should provide training on trauma reporting, offer counseling services, and be supportive of journalists’ health needs.

Various participants expressed they did not feel valued or appreciated while in television news, and many were hardly recognized for their contributions. The industry needs to recognize that the profession can be isolating and recognize the work and sacrifices of television journalists.

Anna said that she was barely recognized for her work when she was a television journalist:

“I am a total achieving person, and I am validated internally. I don’t need somebody to tell me and pat me on the back and tell me it’s great that I did that, but when you have absolutely no validation at all, and no recognition of the amazing hoops you’re jumping through, you start to think, why am I jumping through these hoops?”

Even some appreciation and recognition would have made a difference for them. Natalie said, “I don’t even need like… praise every day, but maybe an email that says… hey, thanks for coming in on a day off.”

In addition, the television news industry needs to value its employees who are parents. When Hazel became a mother, she said her viewpoints on stories changed:

“Value what I bring to the table as a parent. I can tell you my perspective as a storyteller shifted a lot when I had a kid, where before I had kids, yeah, telling stories about kids… school issues and stuff was very different than after I had a kid – realizing like it just came from a different place in my heart… But by the time you’re in your 30s, most women are out.”

Structurally, the television news industry should create safer environments for women professionals through combating discrimination, investing in women talent, and limiting multimedia journalist responsibilities. Safety concerns, inside and outside the newsroom, were additional factors that contributed to participants’ decision to leave the television news industry.

“You’ve got to create a safe, safe place for women,” Bailey said. “Like I mentioned, the sexual harassment and discrimination. I know it exists, even though I didn’t really feel it. So, you’ve got to create that safe space.” Natalie also discussed the impacts the industry has on women:

“Even on my best days, I had several colleagues and I who were talking of our escape plan, because this industry, it just really takes a toll on women – people who identify as women. It’s not an industry that allows women to age.”

With sexism/discrimination contributing to eight of the 14 participants’ experiences in television news, equal treatment to their male counterparts is critical. Julia said that the industry needs to pay more attention to its women professionals:

“I just feel like the industry had so many years of being a male dominated industry that they’re still trying to undo a lot of that — a lot of the patriarchy, if you will.”

Bailey is another participant who emphasized the importance of gender equality: “You can’t give a certain assignment to a male reporter that you wouldn’t give to a female reporter because they’re just as competent — sometimes more.”

The industry must improve compensation for women television journalists. To keep Bailey in television news, her employer would have had to “pay people what they’re worth.” Although she felt she was fairly compensated when she left the industry, she was not in her early years, and she knew others who did not make a livable wage.

In Hazel’s first television news job, she made $10 an hour. Hazel described the struggles she faced as an underpaid employee:

“Especially my first market, I was making $10 an hour. I was eating peanut butter and jelly, and I was lucky if it was the good peanut butter. I like I made some truly horrific concoctions of like, these are cheap foods, and you can’t live like that, and there is no reason to do it.”

Hazel paid more for childcare than the amount she was bringing home in her paycheck. At one point toward the beginning of Ivy’s career in television news, she did not have enough to buy groceries. Ivy said, “I feel like they almost groom you to accept that you’re going to be stressed and overworked, and worst of all underpaid because we all start in those small markets.”

When Fiona switched to public relations, she was shocked by her pay raise. She said she realized “oh, this is what normal standard salaries are.”

Hazel said the industry must “pay them like the value professionals they are.” The industry revolves around hard deadlines, inflexible schedules, and low pay, exacerbating the need for women to be compensated appropriately.

Primarily, participants were attracted to the television news industry because they wanted to tell stories that made a difference in their communities. To retain women television news professionals, they said, the industry needs to nurture their values through news assignments and internal initiatives. Provide journalists with the resources to produce quality work that matters to them. Give them opportunities to be involved and support their communities through their storytelling. With participants feeling unvalued, it is important to improve the feedback loop to facilitate recognition and value. Additionally, the industry needs to value the evolving perspectives of its journalists.

The industry should help make young professionals’ transitions from academic life to professional life smoother and present new reporters and producers a competitive, fair starting salary. Young professionals should be informed on the opportunities for advancement and development and be supported within the industry. As multiple participants experienced burnout early on in their television news careers, the industry has an integral responsibility to assist and nurture its young professionals.

Participants said that if management listened to their concerns and was receptive to feedback, fewer issues would be present. Natalie said, “They just need to have conversations and check-in today. You know, hey, how’s it going out there? What can I do? They just need to be more attentive.” All in all, the industry needs to follow through with its actions if it expects to make any changes. Gracelyn said one of the most important changes is to listen to journalists:

“I feel like they need to, like, listen to us, like we’re telling them what we want, and everyone is leaving for the same reason. So, like, actually making those changes… actually going through and doing it. I feel like it’s the biggest thing.”

Lack of appreciation, lack of long-term feasibility, lack of professional development, structural issues, and threats/safety concerns were other significant factors that emerged from the data and contributed to participants’ decisions to exit the industry.

Though most participants still carry a journalistic self-concept in their current roles, the public relations industry allows them to continue telling stories that impact communities in a more structurally-sound and women-friendly industry.

Overall, the future of women professionals in the television news industry depends on the industry’s willingness to make fundamental systemic changes. “It lines up perfectly,” Anna said. “The cons of TV are the pros of PR. I mean, my weaknesses became my strengths.” Ultimately, it is up to the television news industry and management to fix these issues to retain women professionals.