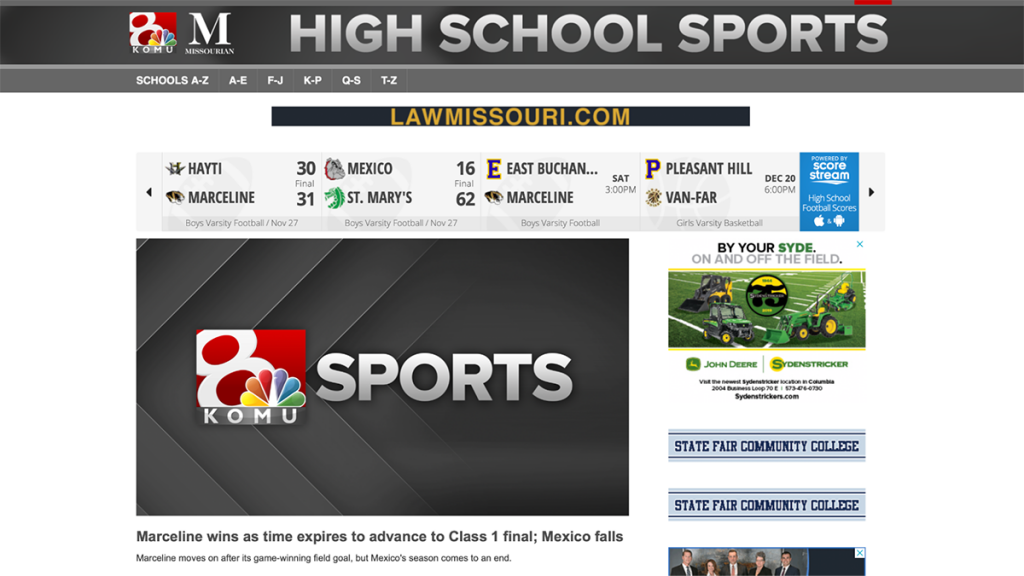 Through the Missouri Method, we give students the opportunity to work in real-world newsroom environments. Meanwhile, our One Newsroom outlets are competing for eyeballs in the communities of mid-Missouri. And, like newspapers, magazines and television and radio stations all over the world, we are always looking for ways to keep them engaged in an era when they’re being pulled in a thousand other directions.

This fall semester, faculty chair Mike Jenner and assistant professor Kathryn Lucchesi saw the increased interest in sports journalism from students at MU and seized on sharpening our two-pronged attack through a new initiative: Get in the Game.

Through Get in the Game, we decided to zero in on the then-upcoming football season. We would expand our coverage while also giving our freshmen a chance to jump right into the newsroom experience and sports journalism. We had the labs available; we just needed to tweak the infrastructure.

It started with boot camps for the freshmen in their first week on campus. We gave them crash courses in writing (me and Brett Dawson), TV production (Ben Arnet and Stan Silvey), photography (Brian Kratzer) and social media (Elizabeth Stephens). And then we let them loose during Week 1 of the high school football season, joining our more experienced reporters, editors and producers on football fields throughout the region.

KOMU had the bones in place for such an endeavor, as it had been sending young crews out to games for years for its Friday Night Football coverage. At the Missourian, we had something similar on the photo side with our Friday Night Sights. But while the packages were always among the best we had to offer from year to year, the overall coverage was lacking without the reporting to accompany them.

Now, with a dedicated landing page — thanks to Stephens — that allows readers to direct themselves straight to stories on the schools in which they have the most interest, the expanded coverage is more centralized and focused.

At the Missourian on the reporting side, we went from almost exclusively covering just the four Columbia high schools during the regular season to having up to a dozen freshmen in the newsroom and out in the field contributing up to 16 to 20 additional recaps and stories featuring a good portion of the 39 other schools in our coverage area each Friday. It was a return to form, of sorts, as publications for decades more regularly used stringers and newsroom assistants to help with high school football coverage.

What it meant for the Missourian from Aug. 1 to Dec. 8 was an increase in page views for the content in the prep sports category, up 39% from the same period in 2020, according to Google Analytics.

That dedicated KOMU/Missourian high school sports landing page, meanwhile, accounted for 163,282 page views from Aug. 24 to Nov. 14. In 2020, before KOMU’s switch to TownNews as a content management system and the addition of the Missourian coverage, there were 60,007 page views for Friday Night Fever content over that same time frame.

With the MSHSAA Class 1-5 football championships taking place Dec. 3 and 4, the first Get in the Game season has come to a close. The varied skills the students have learned will help us as we collaborate more under the One Newsroom model, and we move forward knowing we are connecting with more readers.