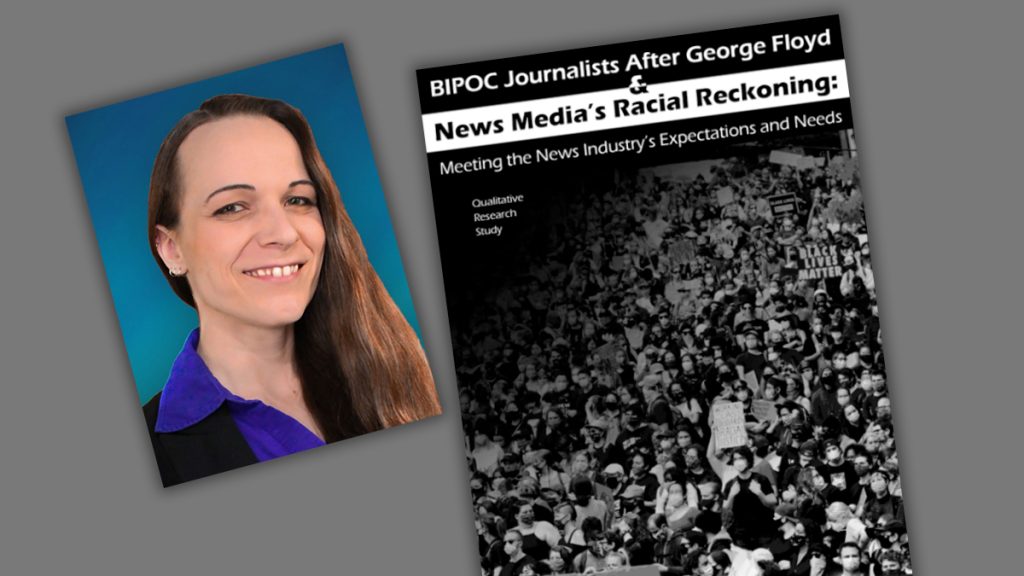 George Floyd aftermath changed the question from what can be said, to what must be said

Emeri Burks conducted in-depth interviews with 12 journalists as part of her work to earn a master’s degree from the Missouri School of Journalism. Burks is currently an independent journalist publishing under the label EB Words (ebwords.org) on human rights, social justice, and international relations.

The two months after George Floyd’s murder in 2020, Google searches for “racism” spiked to levels not seen in more than a decade. American support for Black Lives Matter topped 50% (including 60% of white Americans). Racism became newsworthy, and in response a surge of predominantly Black journalists openly reported on what it’s like to be a person of color in an industry dominated by White culture.

As a result, some were fired. Others used public pressure to challenge policy and shift norms in the industry forever. Today we see mainstream news outlets taking more definitive stances on climate change, on the Big Lie, and on how systemic racism continues to influence every corner of society.

As early as August 2020, interest in racism waned and we moved on. Yet a body of journalists were unable to do so. White people may have been surprised by Floyd’s death, but people of color were not. Journalists of color were even less so.

That’s why for my master’s degree at the Missouri School of Journalism, I chose as my central focus the often undervalued and consistently underrepresented wisdom and experience of Black, Indigenous, People of Color (BIPOC) journalists.

Weighting for minority journalists, I sought out 12 study participants for interviews over Zoom. Analyzing their responses, I answered the following questions:

I found normative bias against and increased pressure faced by journalists of color. What’s more, my findings reflect a generational shift in understanding of journalists’ core responsibilities.

How is the News Media Industry Changing?

With new owners, new leaders, a new labor union representing its journalists, and a public apology for its record on race, the Los Angeles Times exemplifies the post-Floyd racial reckoning. A few months after the Times’ restructuring, the Kansas City Star followed suit and encouraged other news organizations to “get the poison out.”

Not all newsrooms are changing, and those that are, are doing so variably. Even so, shifts in conversation are taking place in an array of industries. Here are some of the ways participants described the changes currently underway in the news media industry:

“Newsroom colleagues were confronted with the [question] of how many times they may have published complete lies attributed to police, and it hopefully made them ponder whether they missed it because they failed to understand why there is mistrust of police in minority communities.”

“There has always been tension between where journalism ends and activism begins, and I believe those lines are blurring more than ever in the racial reckoning that ensued following the murder of George Floyd.”

Speaking on journalistic objectivity, some argued that journalists of color should draw from their own well of experience as a minority to inform current events reporting. Others got caught up in battles over attending Black Lives Matter protests or posting “partisan content” on social media; while others argued that individual perspectives cannot and should not be hidden from the public eye.

My study’s evidence suggests there’s a generational gap in the journalism industry straddling the internet and social media age.

“I work with young journalists who were born on social media. They come to journalism as fully formed people who may have participated in a protest, may have explored their identity, and may have shared their beliefs that something in this world needs to be better.

“These are not uncommon feelings for journalists. What’s different is that now there’s a record, and these young journalists entering the field have a lifetime behind them where they can face criticism for many, many things that frankly I was never subject to, because everything I wrote in college is sitting in a dusty old PDF, or in yellowing paper files.”

The current school of journalistic thought – defined by evidence-based objectivity and the notion of a free and unbiased press – represents the majority of current mainstream journalism institutions. Yet this school is increasingly confronted by the New Journalism school born out of the Civil Rights era, which recognizes that authorities don’t always tell the truth or that individuals possess unique and valuable knowledge. This school also tends to define “objective” very differently.

“I think objective can mean truthful and fair. But I think for the most part it’s reporting on things as if you don’t exist in them, or that you don’t have skin in the game.”

How are professional expectations for BIPOC journalists unique?

While discussing professional expectations, I was surprised to find participants of color commonly discussed a persistent anxiety of being fired — a theme no White participants raised. Yet on reflection, I was humbled to see how this anxiety had surprised me.

For decades major news organizations like the Washington Post, New York Times, and Detroit Free Press restricted Black journalists from covering Africa for presumed inability to report objectively. While we may be far from those days, contemporary newsrooms are rooted in these norms.

“In newsrooms the loudest idea was, ‘You don’t need to go to journalism school. You just got to deliver good work and you’ll be respected.‘

“But it took a long time for me to say, Actually, no, that doesn’t work for someone like me. You have to go through elite doorways and institutions to gain the kind of credibility that I knew I wasn’t receiving, even though I knew I was working two or three times as hard as my colleagues.”

One anonymous study participant, a white woman, described the white lens she viewed her work through in reporting on the building damage incurred during the social unrest after George Floyd’s death:

“We were just being objective and serving the core public safety function of journalism. Which is like, ‘Hey, here’s where fires are burning. Don’t be there.’ I thought that was just a very objective approach….

“But do buildings really matter when people are being shot in the streets? So what we used to think was objective was actually shaped through a white lens, I think.”

How can news organizations best support their journalists to serve the public?

I asked our study participants for recommendations on how newsrooms could best support journalists to meet the changing needs of news consumers. They gave a range of recommendations, but four themes stood out among them.

It can seem risky for a news organization to stand for something at the risk of being seen as biased. But not doing so risks offering no guidance to journalists as they navigate treacherous waters.

“We need to pour more into training our staff – mentorship, honestly – and have more candid conversations about the goals of the reporter and how that aligns with what the reader needs,” said a Black, female journalist from the West Coast.

Lowery said unwritten rules that govern newsrooms need clarification. “Most newsrooms do not explicitly state their values,” he said:

“I think newsrooms need to slow down. Especially if they’re covering issues like race, social justice, and deeply traumatic stories. They just need to take more time with police shootings [or] the aftermath of police shootings…”

“The idea of just maintaining the sanity of your workforce is something that has to enter the conversation a little bit more seriously. I’ve seen many deeply talented, gifted, educated, experienced journalists leave journalism in the past year because it’s too much.

“It’s overwhelming. They report burnout. They report impossible to manage workloads, and you’re always going to lose people who are very valuable if this is the persistent trend.”

Last year, racial minorities made up 42% of the national population but 29% of news reporters nationwide. However, study participants felt minorities needed more representation both in terms of quantity and quality.

Easter said, “We need more than just lip service about these diversity issues.”

Reckoning with the past

“I think what the country needs at this time is honesty from journalism — acknowledgement of harm where harm has been done, and being transparent in how [we’re] going to fix that. Then also seriously reconsidering the kind of narratives that we put out – not on an individual basis, but as a newsroom-wide editorial decision.”

“Not just within the last few years or decade — we’re talking since the foundation of the profession. There needs to be a nationwide truth and reconciliation of some kind happening within the journalism institution, and for that matter — every industry in America right now.”

Will we be unprepared again?

We should not be surprised that BIPOC journalists face higher pressure to conform to industry standards, nor that normative biases disadvantage BIPOC staff even in defining what is meant by “objective,” “fair,” or “neutral.” I was, and I must investigate this blindness myself.

Similarly, we should have seen George Floyd’s murder coming, along with the blatant falsehoods police told about his death. It’s time we reckoned with why so many did not and could not.

We can’t prevent the next George Floyd. Statistically, two to three Black men were killed by police today. But when the next public violation of minority rights brings attention once again to systemic racism and social injustice, will we be prepared for the necessary conversations in our newspapers and our digital media, or will we be blindsided again?

How prepared the journalism industry will be depends on the seriousness with which we address what our journalists are telling us in this study and elsewhere. Towards that end, here are some of the things study participants said they hoped you, the reader, would take from our research.

“I hope that [the study] deepens [the readers’] understanding of the real trauma that this industry is responsible for, for a legion of journalists. Not just from the last generation, but generations deep. It breaks my heart to think about what that might look like when you amass all of the grievances.”

“I do hope that [readers] learn that we need to make sure that we’re giving support to journalists of color. Because oftentimes they’re isolated in the news when they’re one of a few or the only person. That comes with its own set of challenges, of insecurities, of feeling like it’s their sole responsibility to tell these stories.”

A Black, female journalist from the west coast

“I hope [readers will] learn that there are people who are willing to make journalism different. They’re working really hard to make it different, and they’re imagining a future of what a different, more equitable journalism looks like.”

The complete study is available on Amazon and Kindle.