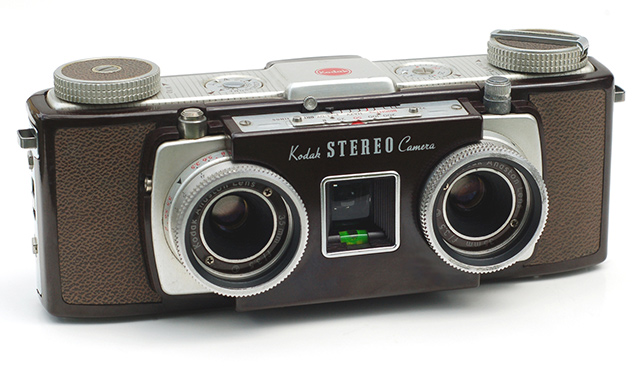 I’ve been through twin-lens reflex cameras, meterless Nikons, underwater rigs, digital wonders and mobile phone cameras. But I’ve never been so frustrated as my first experience with 3-D.

That shouldn’t be — and we are working to make sure it never is for other journalists.

The addition of depth makes 3-D cameras violate many of the rules that we learned as news shooters. Background, for instance. We’ve all looked around for a blank wall to put our subjects in front of. Especially for mugshots, that neutral background makes our subjects pop out. Ersatz 3-D, if you will.

But the effect of a blank background on a real 3-D picture is to turn it back into 2-D. With 3-D, objects in the background generate the perspective your eyes need to generate the sense of depth. The color, size and the movement of background combine to make a foreground subject pop out like that 2-D mugshot could only dream of.

Then there is the horizontal/vertical dilemma. Like many news shooters, I love vertical shots — especially of people. But current 3-D cameras shoot only horizontally. The 3-D televisions, projectors and viewers we use start with two side-by-side images for conversion. When you rotate the two lenses of a 3-D camera, you get top-and-bottom, not side-by-side.

There are many more issues that have tripped me up. The acuteness of the shooting angle, the impact of movement and the distance from lens to subject all are critical. Not to mention keeping one of your fingers from covering the right-side lens.

Why don’t news photographers have difficulty facing similar challenges with their 2-D cameras? Muscle memory. We are so well trained as photojournalists that we never think about whether we should use a flash, tighten the aperture or move over so the pole isn’t coming out of the subject’s head. We have the luxury of reacting, rather than thinking about the details of photography.

Over the next few months, we at the University of Missouri 3-D Journalism Project (MU3D) hope to develop a set of game plans that will let photographers succeed at 3-D without agony. We plan to do the trial-and-error for you.

Adam Vogler, our research assistant, is a key player in this effort. Before entering the MU master’s program, Adam was a photographer and photo editor at several newspapers in Missouri and Kansas. His portfolio is a joy to click through.

Adam is putting together a list of everyday photo assignments that all journalists face. Not the rioters tossing firebombs or the skydiving feature, but the bread and butter shots of local politicians, community faces and familiar places.

Our plan is to find published good examples of each and then try to duplicate them in 3-D. We have no expectation of doing it well the first time out. With the help of students in my Emerging Technologies class, however, we will pick apart our trials and reshoot until we get a crowd-pleaser.

After that, we plan to diagram the shot to document the recommended angles, the background perspective and the nuances of depth framing. The result should truly be a game plan not unlike the one on a coach’s clipboard.

We hope the plans allow news photographers to step through those common shots a few times until a new muscle memory sets in. Without pain.