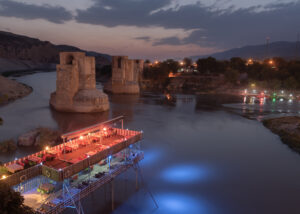 A view of ancient Hasankeyf is about to be flooded with its history which goes back approximately 12,000 years ago. With the completion of the Ilõsu Dam, the evidence of many existed civilizations along with their historical ruins will be vanished. The photo was taken on Sep. 15, 2019 My project tells the story about people from the Hasankeyf where is one of the oldest inhabited places in the world, who had to leave their ancient villages left underwater. Hasankeyf is located in the area of Mesopotamia that is also known as the Cradle of Civilizations, where both eastern and western civilizations have lived for over 12,000 years. The Ilõsu Dam and the hydroelectric power plant (HPP) project construction began in 2006 and was completed in 2019. In June 2019 the floodgates were closed in order to keep water inside. The Ilõsu dam project, along with other dams built in this region, is a reflection of the state’s water policies. For this reason, as an open-air museum with many layers of time, Hasankeyf meets most of the required criteria to merit UNESCO’s World Heritage status, yet it has not been submitted nomination proposals by the state. The Tigris Valley is in the ancient silk road, an area of approximately 100 km was buried underwater. 12,000 years of HasankeyfÕs history, hundreds of endemic species, and approximately 300 archaeological sites were affected by the dam’s water retention, furthermore, around 100,000 people were forced to migrate. Regarding the Ilõsu Project, a total of 199 villages of Batman, Siirt, Diyarbakir, Mardin, Sirnak, and Hasankeyf, were completely submerged. Most of the population of these villages are of Kurdish and Arab origin. These people had to gain new experiences that they have never had before to overcome these extraordinary circumstances. For instance, a woman carried her husband’s grave while another eighty-year-old woman got on the boat for the first time in her life, both had to make an effort to adapt to the fact that the whole process brought to their lives. My project aims to emphasize the obliged migration of culture to different places with a burdened journey.