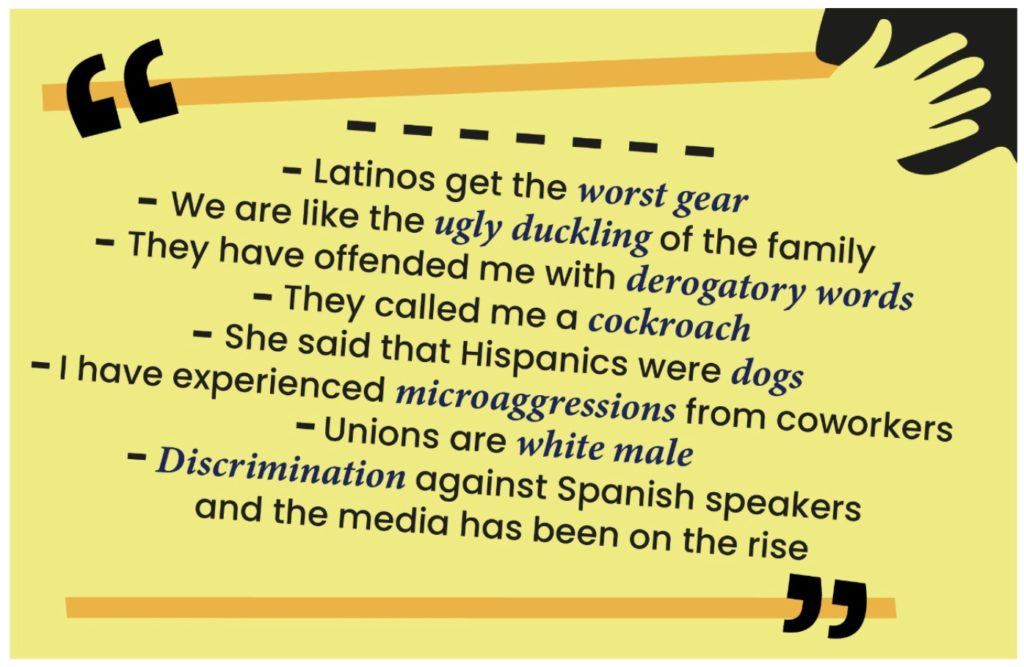 Quotes from our survey on discrimination against Latino journalists in the industry.

In our investigative project we have already mentioned salary disparities as the main factor of discrimination, and our final product will focus on a tool kit for young Latina journalists to use as they face their first employment interviews. While we are working on this, we will also bring to light several testimonies we have gathered during our research and our one-on-one interviews with Latinx journalists in the U.S.

What has been interesting is that journalists don’t tend to check the boxes about discrimination in our survey, but when interviewed about their experiences working in different newsrooms they tell us about the intimidating effects that some generally accepted racist attitudes have had in their work.

We will present their testimonies without identifying the person who made them, as many asked us for anonymity, but all quotes are researched and backed by Fundamedios. The statements below were made by 21 of the 108 journalists that have been part of our study.

Nineteen percent of those we spoke with provided us with example of discrimination against them. There is a growing hostile environment against Latinos outside of the newsroom, in addition to the long history of Latinos being treated as second class citizens or as one of our interviewees called it, as  “the ugly duckling” of the newsroom.

My work conditions are different

Several respondents focused their comments about discrimination on their working conditions, be it the equipment, gear or number of people assigned to work different tasks in comparison to the English language section of the same outlet or in others similar ones.

“When I go to cover news I go with my simple tripod, which I bought, and I go alone on the street. Other media work with four people. We are like the ugly duckling of the family that they never remember.”

“I was a more experienced freelancer who didn’t get a position over a younger Caucasian blonde woman. People made ‘funny’ comments about it.”

Although many journalists have shown to have very thick skin and ignore most of the comments, we gathered many examples of verbal aggressions against Latino journalists or against the Hispanic community. Some disrespectful comments came from colleagues at their places of work, others from audiences who rejected watching stories about Latinos, others were against journalists who were denied information or were called denigrating words.

“It was not racism towards me but towards my reporting on the Latino community. Some comments on facebook said ‘I will not tune into this station if they re-publish content translated into Spanish’. Ninety-five percent of the comments on social media were negative, racist and hateful’.”

“I got obscene emails and calls from readers referencing my Latinx name, and topics I wrote about.”

“ I have been told that the Hispanic media is hypocritical and that we are not with the community. They have offended me with derogatory words.”

“I did not manage to record even one interview, Nobody wanted to talk to me and when a man spoke with his microphone in the air I wanted to start stepping on it and two guys started pushing me and called me a cockroach.” (This was while covering a protest in Shelbyville, Tennessee in 2018)

“I have been the victim of several verbal attacks by protestors while doing my job. I have been branded as reporting false information, (people) shouting  “fake news.””

“In the communal kitchen of the station I had just had lunch and the head engineer threw his cup at me, to wash it. He was always very disrespectful to me”.

“When I covered a public hearing on undocumented immigrants, a woman was speaking and said that Hispanics were dogs, and when I interviewed her, she asked me for my driver’s license, and she verbally assaulted me. I reported it to the organization she represented.”

“On the station’s Facebook page, some people in the audience criticized the publications made in Spanish.”

“I have experienced microaggressions from coworkers due to being Latina.”

“Systemic racism is in every institution. Also in Unions they are all white males, there is also institutional racism.”

“In Oklahoma I received letters full of insults, they deduced that I was married to a Latino and they sent me letters accusing me of being a sinner because we were married between two people of two races.”

Discrimination against Latino journalsits is not new, but it has worsened during the Trump administration. There is a growing lack of access to information, and more incidents of people on the street emboldened to denigrate Latinos journalists who report in Spanish or talk with an accent.

“At the White House, where I report from, some white journalists make comments and even talk badly because I report in Spanish.”

“In Boston and Florida, I had sad experiences of discrimination for being a Latino reporter and speaking with an accent.”

“When applying for a position, my boss told me that even though I work for the news or some national show, I will never have a fixed position on the news because of my Caribbean accent.” (There is also discimination in Latino media outlets).

“Generally, the Governor’s Office does not allow for Spanish-language media inquiries.”

“It is also difficult for us to get answers from ICE and the sheriffs, some are anti-immigrant. They don’t send us press releases or invite us to calls.”

“Discrimination definitely worsened with the Trump administration and its discourse against Latinos. Like all that hatred from the people came out and they felt free to discriminate against whomever they wanted. One time we were on our way to West Palm Beach and we were speaking in Spanish and a lady came to say that we will speak in English. Since Trump’s arrival, discrimination against Spanish speakers and the media has been on the rise.”

Fundamedios’ study is based on the answers from 108 people, who responded to the survey or were interviewed directly by Fundamedios.

As part of our mission in the U.S., Fundamedios will continue gathering information about racism and discrimination that affects Latino journalists. Especially in their exercise of the right to freedom of expression and limits the right to access information for the Hispanic community, but for this project we won’t include more data as it is time to move on to building resources to address what we’ve already discovered.

In the next few months, we will focus on developing the tool kit with specific interviews from experts, as well as establishing key connections to offer the materials we will develop, with the support of the Reynolds Journalism Institute, to organizations that can benefit from these resources and where we can amplify the our reach to more Latina journalists.