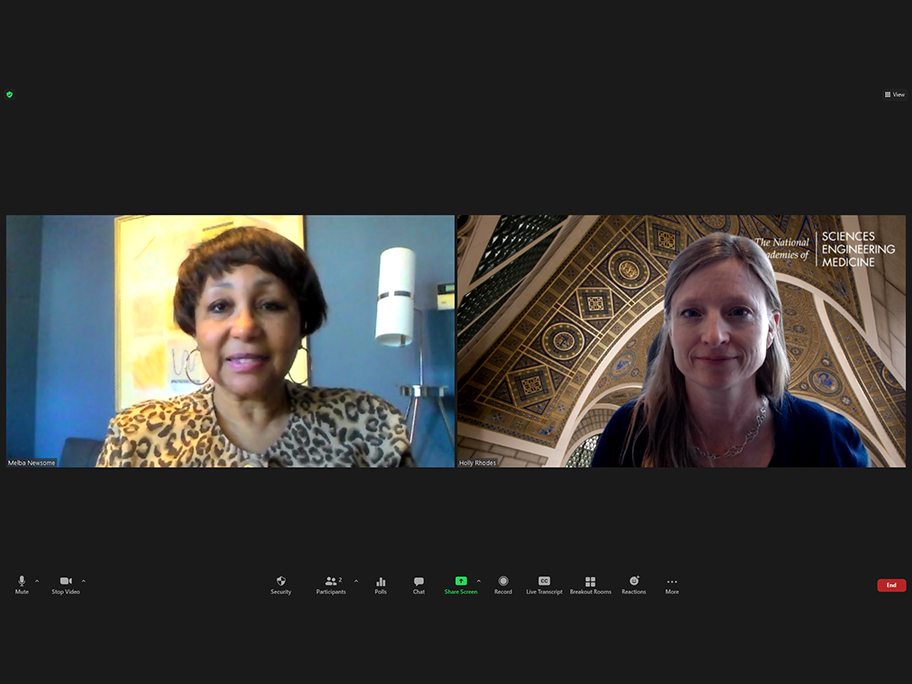 Melba Newsome speaks on a Zoom panel sharing tips for interviewing and reporting on people and communities of color for The National Academies of Sciences, Engineering, and Medicine.

We have to put in the work.

The first stage of my project was getting newsrooms on board with making their reporting more reflective of the communities they cover. Next, my media partners and I had to answer that age-old question: “How do I find and-or curate more diverse sources?”

With those two things accomplished, what remains is getting sources on the record and into your stories. That may seem like the easy part but, to my surprise, I learned that source participation can be a challenge. Particularly because these three things are often true: potential sources are not savvy about the media process, they have a general distrust of the media, and-or we as reporters aren’t prepared to engage them.

Whether they are real people sharing their experiences or subject matter experts, few people who don’t work in media know what to expect when they agree to be interviewed. For example, they don’t know that an hour-long interview might produce one quote or be cut out of the story altogether. Part of our job as journalists is to explain the process so that when the assignment is over, the source doesn’t feel misled or disappointed in the end result.

At a time when Americans are more tapped into news events, they remain largely distrustful of the mass media. In the latest findings from Gallup’s annual Governance poll conducted last summer, just four in 10 U.S. adults say they trust the media to report the news “fully, accurately, and fairly.” while six in 10 have “not very much” or “none at all.”

That division is more stark along racial lines. In 2017, the Center for Media Engagement at the University of Texas at Austin’s Moody College of Communication conducted a survey to gauge the trust in online news. Trust among Blacks was a mixed bag. The survey found that, while Black Americans trust journalists in general, they did not necessarily trust journalists to cover Black communities.

This wariness stems from the relationship (or lack thereof) between reporters and potential sources. Most study participants had never met or knew how to connect with a journalist in their communities.

There was a stark disconnect between the way Black people believe the media should cover their communities and how it actually does. They particularly felt coverage of Black communities lacked context, was one-sided and incomplete. Diversity of the Black Americans’ trust of the news media depends a great deal on how well they felt the media covered their communities, and, to a lesser extent, how diverse they felt newsrooms were.

Today’s increasingly diverse population has led to the need for a better understanding about communities and cultures other than our own, also known as cultural competence.

After building the Public Insight Network of diverse sources for American Public Media, inclusive media consultant Linda Miller worried that newsrooms were sending out reporters who were unprepared for the task. If reporters aren’t culturally competent to engage this more diverse source contact list, they are unlikely to get what they want and may even cause more damage.

Many newsrooms have begun to help the staff develop the awareness, knowledge, and skills necessary to actually listen, engage and build empathy for someone else’s experiences. This happens with training, outreach activities and a commitment is made to turn a temporary project into institutional change.

“It’s all common sense,” says Miller, “Relationship building, trust-building, empathy, solidarity, being an advocate for your community are not things that you just say you’re going to do and then suddenly the system’s magical.”

If this is going to work, we have to put in the work.