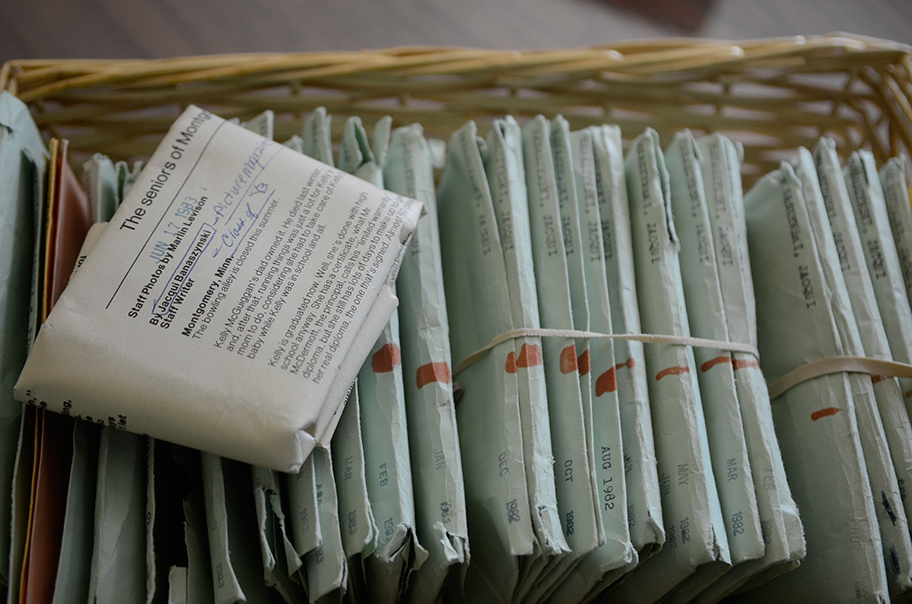 Altogether there are just 32 small envelopes, faded to an institutional green, with shredded corners and split seams. An unimpressive collection and, as their savior so plainly put it, not enough to fill a shoebox.

Yet they hold almost three years of my life’s work. Work headed for a dumpster if not for the thoughtfulness of a colleague from my long-ago reporting years at the Minneapolis Star Tribune.

“It’s your lucky day,” she wrote in a quick Facebook message. “I found your bylined articles.”

Like any newspaper journalist of my generation, I marvel at possibilities of the digital age, and despair at the downsizing that has come with it. First the buyouts, then the larger layoffs, then the wholesale discard of both buildings and bodies. Five of the seven primary newsrooms I’ve worked in have since moved to smaller or more modern quarters, their buildings sold for needed cash. (Just two months ago, news broke of the sale of the Chicago Tribune tower, perhaps the most fabled newspaper building in the world.) Countless of the reporters I ran with in the 1970s and ’80s have been pushed out of news journalism. My own partner — a sure-handed editor — was among the veterans thrown under the SUV by a panicked publisher. Short of being dumped on the street myself, I didn’t think it could get more personal.

Until it came to my clips.

My 32 envelopes were lumped in with thousands of others to be trashed as the Star Tribune cleaned house in anticipation of a move. They date from February 1981 through October 1983. I had pen-scratched my way up through three smaller newspapers before landing what I hoped would be my dream job in Minneapolis. Much of what I covered there was the mundane stuff of civic life: ice storms and power outages, bankruptcy filings and environmental lawsuits, school consolidations and school graduations. Some of my work is downright embarrassing, like the feature about a couple who got married at a Minneapolis grocery store: “They spent the salad days of their romance pushing the grocery cart through the aisles at Byerly’s. He opened the lox of her heart; she was the Winesap of his eye.”

Yet those tattered envelopes house priceless treasures. They are, of course, precious to me as a record of that time in my own life. I’ve never been good at keeping a journal, so these dated clips mark adventures, challenges, misfires — and some things I had long forgotten. (Like that time I wandered into the men’s bathroom at the gender-segregated Minneapolis Club on a harsh winter day, thinking it was the coat room.)

Some are unpolished gems — glints of a young reporter-writer striving to make a career for herself, and a difference for others: the takedown of a fraudulent property developer. The profile of a rape victim who wrote an open letter to her attacker. Interviews with three of the first gay men in Minnesota dying of AIDS.

But ego aside, I believe my clips — any reporters’ clips — are an essential story of time and place. They are, for all their deadline limitations, the “first draft of history.” The newspaper’s library, or morgue, was not just a memorial vault for published stories, but a repository of history, accountability, culture and change. It housed a vein of ore that, when mined by ethical journalists and researchers, provided context, marked society’s progress — or the lack of it — and revealed glimpses of some collective truths.

Now, for all the wonders of digital technology, that morgue is disappearing.

I worked as a field reporter for 20 years before I moved into editing and teaching. My bylines march up to the early 1990s, just as the internet was starting to dictate the future. Surviving newsrooms are still scrambling to adjust, and many don’t have digital archives dating before the mid-1990s. Want to read my dispatches from Antarctica or Sudan or the Seoul Olympics? Maybe you could get access to what remains of the morgue at the St. Paul (Minn.) Pioneer Press, where I did that work. More likely you’d have to find the patience to scroll through microfilm at the James J. Hill Reference Library — assuming the microfilm machines still work.

In the glory days of print, diligent news librarians clipped multiple copies of each day’s paper, story by story, and filed them by topic, subject name, byline and more. They then created a careful cross-reference of those files on index cards – an old-school but highly searchable field. When a reporter launched on a story, the first and last stops were often the morgue, to discover what had gone before and what might have been missed. It was like thumbing through a dictionary in search of a specific word, but stumbling upon other, delicious words and knowledge along the way. And unlike today’s internet searches, it was a file that couldn’t be ranked, altered or erased by ever-changing algorithms.

Now, as newsrooms contract or fold, many of those paper clips have been shuffled off to libraries or historical museums, sold to digital storage firms that put profit ahead of public interest, or simply tossed.

I am not arguing we go back to the future. And since the mid-1990s, most journalistic work has been published online and is accessible — technological glitches and paywalls notwithstanding.

But apparently even that current archive isn’t secure. Webpages have limited shelf-life — an average of 100 days according to the people who get this stuff — with links so ephemeral that a future search might yield little more than a 404 error message. My colleagues at the Donald W. Reynolds Journalism Institute are working with librarians, scholars, journalists, publishers and others to “save online news;” they call this “the most urgent threat to cultural memory today.” And at the Missouri School of Journalism, we now teach our students a multi-step process in Journalism Archives Management to save their clips — something they may have to do again and again as technology changes. I guess it’s the 21st century version of finding new boxes for the brittle, yellowing clips I’ve been carting through my career.

I believe my clips — any reporters’ clips — are an essential story of time and place. They are, for all their deadline limitations, the “first draft of history.” The newspaper’s library, or morgue, was not just a memorial vault for published stories, but a repository of history, accountability, culture and change. Now, for all the wonders of digital technology, that morgue is disappearing.

After my Strib clips were rescued from the dumpster, I called the five newsrooms where I had been a reporter.

Although the Minneapolis Star Tribune let go of its paper clips, it is very close — “within days or weeks” — of putting digitized microfilm on its website dating back to 1857, according to Strib librarian John Wareham. Not searchable in the same way — you have to know what you’re looking for, so serendipitous discoveries are rare — but at least available.

My first two newspapers, the Janesville (Wis.) Gazette and Duluth (Minn.) News-Tribune, are in the same buildings where I worked in the 1970s. Their pre-internet clip files are intact — for now. In Janesville, methods to digitize past and present clips have left searchability “kind of wonky,” said editor Sid Schwartz. In Duluth, paper clips are stashed in the attic. “It’s not a working morgue in the old sense,” said editor Rick Lubber, but reporters rummage around when they need to research the origins of an issue or, perhaps, an obit. The paper also digs into them for a cool-sounding feature called “DNT Attic.”

It was a sadder story at the Eugene (Ore.) Register-Guard, where I came into my own as a reporter in the late 1970s. When the newsroom moved to a new building in 1998, “The clips didn’t make the trip,” said Carl Davaz, the deputy managing editor. The R-G was part of the Google News Archive project, a failed promise to digitize the world’s newspapers back through time. The newspaper has since reclaimed the original microfilm it loaned to Google. “But our microfilm machine went belly-up 10 years ago,” Davaz said. “A new one was so expensive we didn’t bother to replace it.” Massive bound volumes of the print newspaper survive, he said, kept “in a storeroom under a tarp.”

As for the Pioneer Press in St. Paul, where my reporter’s heart found its true home, I learned that remaining reprints of my Pulitzer Prize series, “AIDS in the Heartland,” had already been sent to the shredder. The building had been sold, the newsroom moved; there was limited storage and, for a story 28 years old, perhaps limited interest. To its great credit, the paper still has most of its old clip files. And a young reporter named Nick Woltman is something of a history nerd; in between his other assignments he is slowly digitizing all three of the paper’s Pulitzer-winning projects. It’s an effort “we indulge at every turn,” said editor Mike Burbach. (Meanwhile, you can find George Dohrman’s 2000 Pulitzer work for beat coverage of the University of Minnesota basketball program on the Pulitzer Prizes site. John Camp’s 1986 Pulitzer series, “Life on the Land,” is on his personal website.)

So that history is scattered but mostly saved — if you know how to look. For example, if you Google “AIDS in the Heartland,” the first link that pops up won’t necessarily take you to the Pioneer Press or even to my own StoryLines website. You’ll more likely get to a mistranslated version that was pirated for a Chinese website — a link I refuse to provide here. And even if you find your way to the original series in its entirety, including the stunning photos taken by my reporting partner, Jean Pieri, the hard copies are all but gone.

Except for the one sturdy box I keep on a high shelf in my garage, praying mice and moisture don’t find it.

I extend a special thanks to Lee Svitak Dean of the Minneapolis Star Tribune, who spied my clips and rescued them; I wasn’t the lone recipient of her generosity. To St. Paul Pioneer Press editor Mike Burbach for saving the page production films from “AIDS in the Heartland,” and to my brother, Kent, for playing courier. And to the National Women and Media Collection at the State Historical Society of Missouri, which keeps finding room for the stuff that matters.