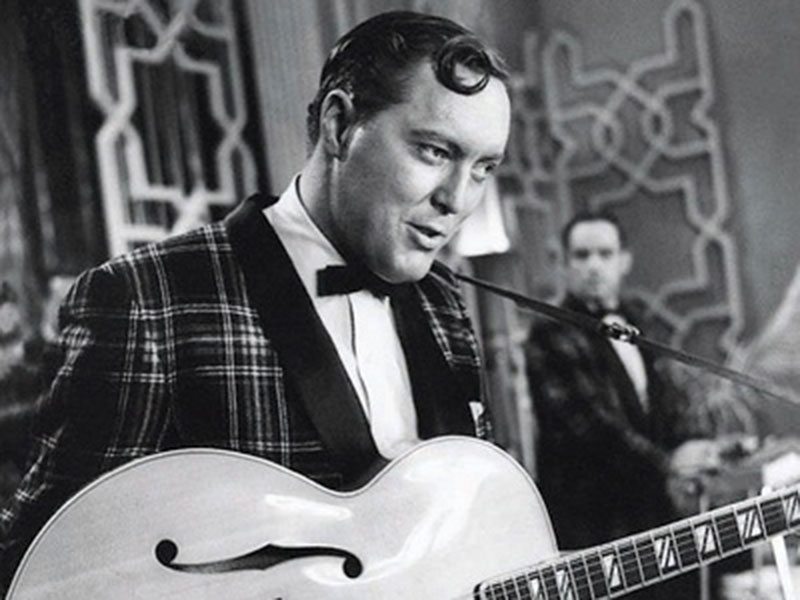 On a blustery February day in 1981, a two-sentence story moved on the Texas AP wire reporting the death of Bill Haley. It said something like:

I was the AP’s assistant chief of bureau and state news editor at the time, and I remember seeing the story and calling our correspondent in Harlingen. “We need more of a story than this! Maybe he’s not Elvis, but Bill Haley was a big-time star!”

Our correspondent said she didn’t have any more information. The police would say no more, and the widow wasn’t talking. Local officials and residents wanted to guard the family’s privacy.

I logged on to the terminal, put in Bill Haley’s name, hit the search command, and a treasure trove of articles about Haley appeared on the screen. It seemed like magic.

We might not have had many details about his death, but — thanks to the electronic archives — we had plenty of background so I could write about Haley’s life and career.

From this treasure trove, I quickly wrote Haley’s obit. Thanks to the electronic archives, newspapers around the world (and radio and television stations) were able to publish a fairly extensive story about Haley’s career. With access to electronic archives, we could report that his most famous songs were “Rock Around the Clock,” “Shake, Rattle and Roll,” and “See You Later Alligator.”

The archives told us that Haley and the Comets had performed for Queen Elizabeth II; had been among the earliest rock groups to perform on the television shows hosted by Ed Sullivan, Milton Berle and Dick Clark; and that some considered Haley as the “father of rock and roll.”

Without this first electronic news archives, we would have needed much more time and effort to compile a comprehensive story about Haley, who had slipped into virtual seclusion (and alcoholism) in his last years. We would have had to rely on human memories, paper archives, print libraries, and microfilm.

Today, digital archives and “computer-assisted journalism” are commonplace. Reporters routinely use search engines to find background for their stories. Almost all stories, photos, videos and related news assets are now created digitally — so one might think electronic archives are universal.

But it’s not necessarily so.

Digital archives may not be as complete or long-lasting as they could/should be.

The Donald W. Reynolds Journalism Institute says: “One recent survey found that most American media enterprises fail to adequately process their born-digital news content for long-term survival. This potential disappearance of news, birth announcements, obituaries and feature stories represents an impending loss of cultural heritage and identity for communities and the nation at large: a kind of Orwellian “memory hole” of our own unintentional making.”

The institute has scheduled a symposium, “Dodging the Memory Hole: Saving Born-digital News Content,” to be held Nov. 10-11 in Columbia, Mo. Organizers say the event is aimed at those “concerned about the fragility of digital news content from the past 40 years… (and) “saving this ‘rough first draft of history’…”

Archiving digital content is not as simple as it might seem. As the institute says, “In today’s digital newsrooms, a software/hardware crash can wipe out decades of text, photos, videos and applications in a fraction of a second. Digital archives can easily become obsolete due to evolving formats and digital systems used by modern media, not to mention media failure, bit-rot and link-rot.”

Back in the mid-1990s, when my company, TownNews.com, started hosting newspaper web sites, our programmers asked me what to do with old content. “Should we kill it off after 30 days?” they asked.

I plan to attend the Reynolds event “[Dodging the Memory Hole:] Saving Born-Digital News Content.” Maybe folks smarter than I am can find answers to these critical issues.

Remembering the “miracle” of retrieving details about Bill Haley’s life, I told them to not kill off the old content — to store the stories and photos (all low-resolution). Editors and reporters discovered that, as an unexpected by-product of having a web site, they had a news archive system. We developed a “back door” that allowed editors to add content to their archives that they didn’t want published on their websites.

But I hated that the e-editions weren’t being archive. It was a crime, at least in my mind, that all the work had been done to create fully searchable electronic newspapers — only to see them destroyed after 30 days.

So we drastically cut our storage rates last year. Even so, most of our customers don’t store their e-editions long-term. Even at the reduced storage costs, most newspapers in this age of constant cost-cutting can’t or won’t add pay for electronic archives.

We (and our competitors) have to charge to store archives. My technical team warns me that there are substantial costs to storing archives long-term. We need redundant data centers, and the archivhed content needs to be processed periodically to avoid what the Reynolds Institute calls “bit-rot and link-rot.”

Archives need to be kept forever. This entails a major perpetual responsibility that my company never intended to assume.

I plan to attend the Reynolds event “[Dodging the Memory Hole:] Saving Born-Digital News Content.” Maybe folks smarter than I am can find answers to these critical issues.

We need to save born-digital content, and save it forever.

Published in cooperation with News & Tech