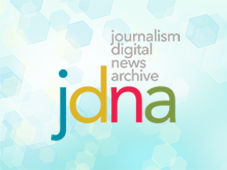 A $35,000 grant from the Knight News Challenge on libraries will help University of Missouri Libraries and the Donald W. Reynolds Journalism Institute develop a long-term model to protect born-digital news content from being lost forever.

Monetizing newspaper content is one approach to saving the nation’s first draft of history, says Edward McCain, digital curator of journalism at MU Libraries and RJI. He will lead the Knight-funded effort to test assumptions about the preservation and monetization of small-newspaper archives.

“Testing the assumptions will help determine if small newspapers can monetize content by licensing it for use by researchers,” says McCain, who also helms the Journalism Digital News Archive initiative at MU.

Assumptions to be tested include:

“By conducting a relatively inexpensive and quick test of key assumptions, we can rapidly determine if more resources should be employed to further develop this model,” he says.

First, researchers must determine the nature of content that currently exists in the archives of a selection of smaller, non-metro U.S. newspapers. The team will work with the Missouri Press Association, Newz Group, TownNews.com and other partners to gain access to these archives. DocumentCloud, which was funded by an earlier Knight News Challenge grant, will help test a possible new way to conduct content analysis on digital documents.

The second step will involve determining the customer market for community news content. McCain and MU Libraries, as well as faculty and graduate students at the university, will determine if there is a potential market for the content in the academic research community.

According to McCain, the team is choosing to focus its attention on smaller papers because many metro papers already have marketing agreements in place with organizations such as Lexis Nexus and ProQuest to monetize their content from the past.

McCain hypothesizes that many small newspapers don’t have a clear understanding of how much or what kind of digital content they have stored – or how it has been backed up at organizations such as townnews.com or Newz Group.

“It’s pretty hard to determine the value of the content on its own,” says McCain. “The factors that might affect the market value of news content include the total amount of it, the nature of the content, the time period covered (five, 10 or 30 years) and other factors. On top of that I think there could be a premium on content gathered from a geographic area such as a state or region. That’s something we want to explore in terms of market analysis.”

Two case studies at University of Missouri media outlets demonstrate how fragile born-digital content can be and the dire need for a sustainable preservation plan, says McCain.

Preserving content is important for helping inform communities about what happened in their communities at the local, regional and national levels and helping democracy function well, says McCain.

“If we’re going to make informed decisions as an electorate, as businesses, as any kind of enterprise, having an authoritative look at history — as reported in news — is extremely valuable,” he says.