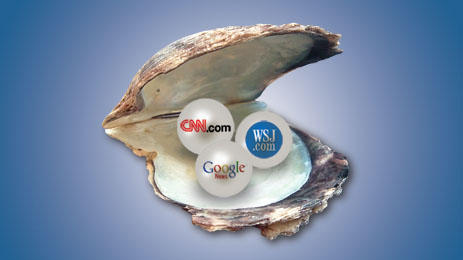 Web shells are the essential structure, the main building blocks of Webcentric journalism. In newspaper-speak, that’s the four- or six-column 13.5- by 22-inch nested pages of newsprint. In TV-speak, it’s the 30-minute news-weather-sports lineup.

Jane Stevens came up with the term “shell” because the other names that people were using in 2002 — evergreen packages, contextual navigation, orbiting content, content navigation or sub-section — just had too many syllables. To quote Albert Einstein: Everything should be made as simple as possible, but not one bit simpler.

The name AND concept comes from a seashell, such as an oyster. Within its shell (a home page), an oyster has all the necessary parts that make it a vibrant, functioning whole: gills (data), heart (stories), intestine (backgrounders), stomach (resources), mouth (advertising), mantle (info, news and stories from the community) To live, to thrive, to survive, it must exchange stuff — food, water, etc. — with the outside world. So does a Web shell; it exchanges information, the blood of the Web.

Web shell provides a place for

Web shells demonstrate how a journalist’s role is changing.

Web shells began as a place to provide context and continuity for stories. With a few exceptions, the first beats that newspapers turned into Web shells were sports, business and entertainment. Then Web shell development skidded to a halt. That’s due to one simple fact: except for political campaigns, the rest of traditional news coverage isn’t data-driven or contextual.

Even before the Web existed, sports, business and entertainment were covered differently than other beats, such as health, crime, environment, transportation…whatever constituted local news. The story of a football game was told in context of a season. The story of a day in the stock market was one point on a chart of ups and downs over time, and in the context of economic indicators. The story of an actor was usually placed in context of movies, in time (usually what’s playing THIS week) and space (a geographic area). Readers expected that context. Woe to a newspaper if a local team’s stats, a company’s stock price, or a theater’s movie offerings were missing.

But in crime reporting, for example, journalists report on individual crimes that may or may not be typical. So, although individual stories are accurate, members of the community usually don’t know what crimes are actually the most costly to the community, economically and emotionally.

Two developments — accessible databases and the Web — provide an opportunity for news organizations to cover all beats so that most stories are reported from data, in a matrix of context and continuity. But few news organizations have made that transition with beats other than sports, business and entertainment.

Examples of some news outlet that use web shells

The BBC has produced the most varied and numerous Web shells in its “Special Reports” sections. Several years ago, they developed a template for the Iraq war coverage, and it worked so well that they expanded it to any issue that dominates the world stage, such as the China earthquake, the U.S. presidential election, and the global financial crisis.

Because the BBC is publicly supported, it doesn’t do advertising. But the shells have everything else, even limited community involvement. People send in videos explaining how the financial crisis is affecting them, their photos of the earthquake damage in China, and text messages about the U.S. presidential election that showed up on a global map.

The Seattle Times and Seattle Post-Intelligencer traffic sites. Both show that the journalists that created these sites are thinking about what people want to know first about traffic, and why they would return to this site often: It’s not the story of the day. Most people want to know the answer to this question most of the time: Can I get there from here? Web cams of highways, traffic maps, and links to resources such as gas prices and transportation calculators dominate both pages; the stories by journalists are secondary.

The Ventura County Star’s golf section has stories, reviews of local courses, a course search, gear updates, golfing tips and a place to reserve a tee time. It’s become the go-to place for anything about golf in Ventura County. The New York Times has started topic pages, robust collections of “news, reference and archival information, photos, graphics, audio and video files published on topics ranging from Madonna to Myanmar.” These topic pages are a few elements shy of a true Web shell, which looks more like what the Times has done with its Real Estate and Autos sections. And on those shells, the only thing missing is some serious community participation.

Newser takes an interesting twist on shells: it’s created a template that people can use to create their own aggregations. These “threads” as Newser calls them, are more like the Times’ topic pages. Here’s the one on Studs Terkel, who died recently. The template has a column for stories, a spot for video and photos, and others for backgrounders, recommended reading and related threads. And anyone can edit these aggregations.

But with decades of division between journalists and the rest of the organization, journalists forgot the larger picture.

So how do Web shells demonstrate how a journalist’s role is changing? With traditional news organizations — especially the large metros — shrinking or collapsing, the word of the decade is fast becoming: NICHIFICATION. There’s still a need out there for all those journalists who lost their jobs. And they can create their own small geographic or topic-based organizations.

Whatever small organizations jurnos start, they’ll be Web first (that includes mobile), and maybe print/TV/radio second. Among all the current wailing about business models, there’s evidence that the really old one works just fine. In the 1900s, journalists of olde created newspapers from scratch as a place for information for, by and about the community. Reporters’ stories were only one part of a mix of advertising, classifieds, obituaries, legal notices, wedding and birth announcements, community calendars, humor (comic strips) and games (crosswords), etc. Readers didn’t always think the stories were the most important part; they might peruse the grocery ads or the obits or the classifieds before anything else. (It was years before I turned to news first; comics were the start of my days.)

But with decades of division between journalists and the rest of the organization, journalists forgot the larger picture. In Webworld, jurnos can’t make a living on stories alone; the truth is, we never did.