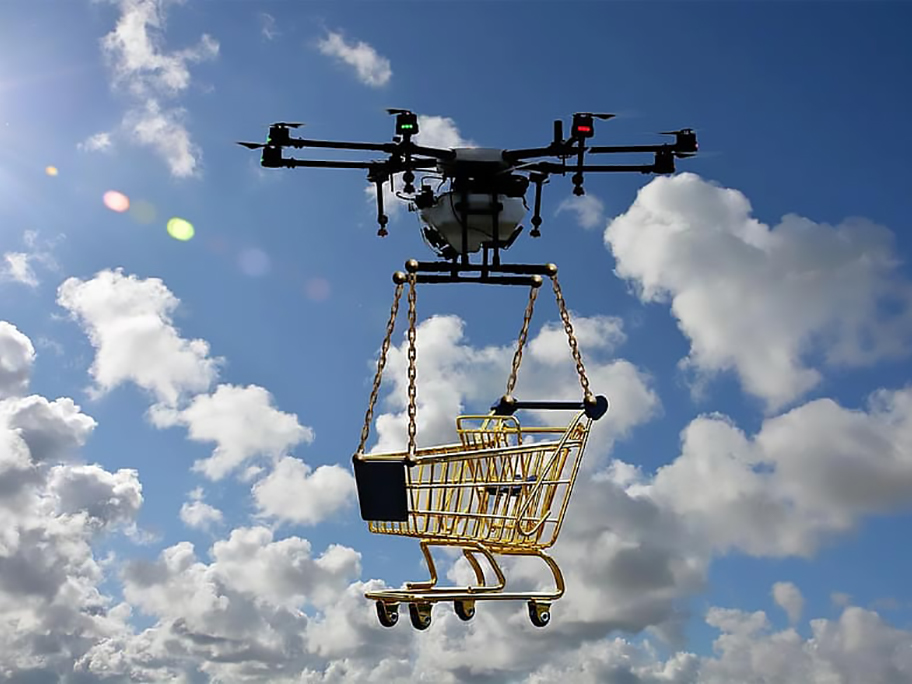 It’s not clear who was more excited about the announcement from the FAA Monday that the agency was granting approval to retail giant Amazon to operate as an air carrier with a fleet of drone delivery vehicles: online shopping addicts or drone nerds. The move by the FAA certifies Amazon Air — the company’s name for its drone fleet — as a Part 135 air carrier. That designation means Amazon may operate unscheduled, on-demand air service in the national air space of the United States.

The certification is a big step forward for Amazon toward fulfilling a promise from CEO Jeff Bezos to drop your ordered goods in your backyard by drone, cutting its two-day Amazon Prime delivery guarantee to just 30 minutes.  As far back as 2013, Bezos told of a future with flying robots replacing ground-bound delivery services for some of its packages. Bezos had predicted this service would be operating long before now, but its progress has been held up by technological and regulatory roadblocks.

There are still many more hurdles for Amazon to clear, and we’re certainly still years from aerial deliveries being commonplace. But the continued progress by Amazon is good for journalists on three fronts.

First, Amazon has very deep pockets. It can work with drone manufacturers to overcome the technological limitations that keep drone delivery from being a reality today — mainly battery life. Drone pilots know the need to change batteries every 20 to 30 minutes means lengthy flights aren’t possible. On the delivery side, having drones fly for short periods of time with many battery swaps a day would cut efficiency drastically. But Amazon can use its resources to develop longer-life batteries or try other tactics like in-flight battery exchange.

Perhaps more important is its work with regulators. Right now, drone flights are limited to remaining within the line of sight of the aircraft’s pilot unless the FAA grants a waiver. A different waiver must be obtained for each and every flight that varies from the rule.  That limitation makes long-distance drone delivery impractical. Industry watchers expect for that wall to fall for delivery drones, opening up the possibility that news and other public services uses of drones could see an easing of FAA restrictions and freedom to fly further and for longer periods of time.

As Amazon and other services roll out drone delivery across the country, two things will happen.  First, people will get used to seeing a lot of drones in the sky. This is simply not the case now.

The final element the Amazon drone ruling portends a change in attitudes. Right now, people hate drones.  As much as I’d like to think that’s not the case, I know they do.  They think they’re noisy and, worse yet, they think they’re nosy.  They hover over peaceful picnics and private backyard barbecues, making a racket and snooping where they don’t belong. And most people don’t see them as particularly valuable because they don’t fly drones themselves.

The situation is not unlike the early days of the automobile. When cars first arrived on our formerly horse-occupied roads, people were not having it. The contraptions were seen as loud, smelly and dangerous. German sociologist Werner Sombart noted, as cars began to invade his idyllic country roads, that “one person was permitted to spoil thousands of walkers’ enjoyment of nature.” He was joined in this opinion by English philosopher C. E. M. Joad, who is recorded as calling the driving of a car “one of the most contemptible soul-destroying and devitalizing pursuits that the ill-fortune of misguided humanity has ever imposed upon its credulity.” Our language today isn’t as flowery, but the thoughts about drones from the general public don’t differ much.

The problem with drones isn’t that there are too many of them — it’s that there aren’t enough of them. Once automobiles became commonplace on the streets of the world, the disdain for them receded to a background level.  People were willing to accept their noise and exhaust fumes because they benefited from having cars around. As Amazon and other services roll out drone delivery across the country, two things will happen.  First, people will get used to seeing a lot of drones in the sky. This is simply not the case now. As a drone pilot, I invariably get stopped by someone almost each and every time I fly my drone.  That person always has the same two questions: “Is that a drone?” and “Are you flying it?” For most of these people, it’s the first time they’ve ever seen a drone in flight.

The second — and more important — change will be that people will start to benefit from drone flights. Those benefits exist now, but they’re too far removed from the general public for people to notice.  Search and rescue drones regularly aid in finding missing people. But most have not been at the receiving end of one of those searches. Agricultural drones inspect crops and direct efforts to increase yields. But few even know the origin of what sits on their plates. And, of course, journalists use drones regularly to broaden news coverage and bring information to readers and viewers. But the bulk of the audience knows less about where it gets its news than its meals.

That dystopian vision I mentioned before won’t seem so once it’s upon us and drones reach the level of ubiquity that cars enjoy now. I picture a sky filled with drones going about all sorts of tasks to benefit us. (Before you picture drones raining down from the skies due to multiple mid-air crashes, rest assured an automated air traffic control plan called UTM is in the works). They’ll be delivering goods, transporting people as air taxis, monitoring pollution, floods and other disasters and yes, covering the news. Once our news drones are mixed in with all the others filling the skies, people won’t be quick to pick us out and complain about what we’re doing.  Ours will be just a handful of the thousands of drone flights everyone sees every day. People will take less notice of our vehicles in the air than they do of the news cars we drive on the ground.

It will be interesting to follow as Amazon works to bring its drone fleet to the skies. While you may not want to shop with the retail giant, its drones will end up delivering goodwill and acceptance for newsrooms around the country.