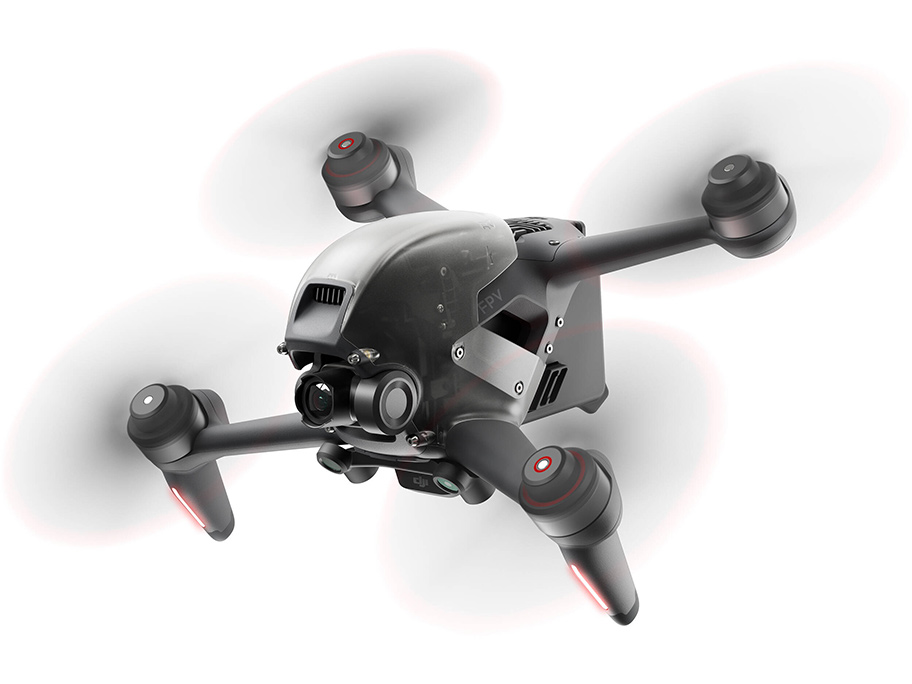 You may have seen it by now. A camera flies toward a neon-lit bowling alley and swoops in the front door, making orbits around the place while pacing a bowling ball gliding down a lane, buzzing the heads of would-be cosplayers of The Big Lebowski, and piercing a window behind the bar to spy on revelers there, all before crashing into a set of bowling pins to end its flight. The movements are so smooth, the flying so precise, you wonder if this is all CGI made by some powerful Hollywood lab. It’s not. It’s the actual flight of a small FPV drone, done in one take over live people and moving bowling balls.

“FPV” stands for First Person View, a reference to how pilots fly these drones. Rather than a pilot looking down at a screen and flying by watching the images there, FPV pilots wear immersive goggles that give them the feeling they’re inside the drone, flying it like a tiny, on-board pilot. This change in piloting perspective gives FPV drones the ability to maneuver more precisely and fly missions no standard drone pilot would ever attempt.

FPV drones are front and center right now due to DJI’s release of its first FPV drone, simply named “DJI FPV.” DJI is the worldwide leader in drone sales, with a market share that would make executives at Starbucks or Coca-Cola faint. But the company had, up until this year, focused its drone design on traditional models for photography and aerial survey, never putting its sizable toe into the FPV market. Priced at around $1,300, the kit comes with a drone, goggles and a traditional controller. Throw in another $200 and you also get an innovative hand controller that gives pilots even sharper control, using hand motions to fly the drone. Even with the cost of the extra controller, that price is comparable to what newsrooms spend now on drones, falling between the $1,000 DJI Air 2S and the $1,600 Phantom 4 V 2.0.

FPV drone technology has been the playground of drone racing and thrill-seekers in general. But there’s a case to be made that this tech has newsroom applications. Here’s a list of reasons you might want to put on the goggles and fly an FPV drone for your next story:

FPV drones are fast — really fast. If you’re flying a late-model Mavic right now, you’re topping out at about 45 mph in Sport mode. So how about more than doubling that? That’s right, the DJI FPV can reach speeds of 97 mph. Considering the FAA limits drones in the U.S. to 100 mph, this is basically as fast as you are ever going to fly a drone. Suddenly, those tracking shots the newsroom needs of trucks on the interstate no longer mean you have to try to get out in front and hold a shot before the vehicle zooms by. The fantastic speeds at which FPV drones are capable give you the ability to literally fly circles around most moving objects you’d want to track. Only a full-fledged NASCAR race is going to leave these drones in the dust.

Second only to the viral bowling alley video in terms of recent FPV flying feats are several videos from Iceland. Covering the eruption of a volcano seems to me to be the ultimate breaking news story, and it’s clear the FPV drone makes closeup photography of the event possible (even if a few get melted). The trademark shots that make FPV drone videos memorable are the ones where the aircraft seemingly threads the tightest of needles, all while flying at high speeds. Imagine that capability focused on breaking news stories. A wildfire burns up a hillside as fire crews attempt to slow its spread. A journalist armed with an FPV drone can weave between the trees and reach the fire line in seconds, showing what the crew is up against and how far it is from the front line. Or capture the aftermath of the fire while it’s still too hot to go in on foot. In another instance, picture the aftermath of an earthquake during which aftershocks make it unsafe to go near damaged buildings. FPV drones can actually enter those buildings to get a firsthand view of the damage—all while keeping its pilot and the news crew at a safe distance.

One of the toughest jobs when covering sports is getting the camera off the sidelines and closer to the action. The FPV drone has the capability of weaving its way through parts of the arena we don’t usually get to see, providing behind-the-scenes views that go beyond the action on the field. Or perhaps you just want to simulate what it feels like to take part in events that cover wide areas of ground at high speeds. The FPV drone can travel along right with the athletes, joining them even as they fly through the air.

Just as with sports, the views an FPV drone can provide of what the audience usually doesn’t see in the newsroom, in the studio or in the field can spice up news promotion and give viewers a look at how their favorite newscast gets made. Or use it to show off the natural beauty of the viewing area.

All this promising footage comes with a few caveats. As drone pilots flying commercial missions under the FAA’s Part 107 rules, there are some things FPV drones can do, but may not under current rules. The law still prohibits flying over people or over most moving vehicles. But for all the FPV drone shots you see where that happens, I see an easy path to record the same footage legally. And remember that indoor flying—something at which FPV drones excel—doesn’t fall under the FAA’s restrictions.The biggest hurdle is flying beyond our visual line of sight (VLOS). But, thanks to the push for drone delivery services, the FAA seems well down the path to loosen or remove VLOS restrictions in the near future.

There will be a training task to tackle for any newsroom buying an FPV drone. Pilots need to get used to seeing the flight through goggles and not their own eyes from the ground. The use of a visual observer seems indispensable for newsrooms so that someone can keep their eyes on the drone at all times. And there will need to be practice time to work out a whole inventory of shots standard drone pilots have never attempted before.

The bottom line is that, as any newsroom looks to add to its drone fleet, an FPV drone makes the most sense. It can still capture the traditional drone shots needed day in and day out, but also give the most daring and creative members of the staff a chance to really stand out visually on an increasingly competitive airborne playing field.

Andrew Moore, journalism student at the Missouri School of Journalism and drone pilot, contributed to this article.