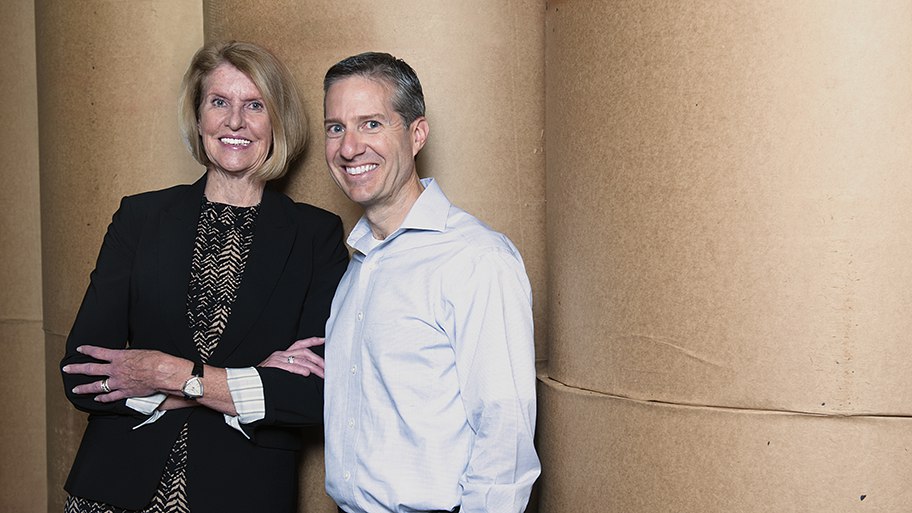 Returning to Columbia, Missouri, after half a century, I anticipated its increased traffic, suburban sprawl and expanding University of Missouri campus. What I didn’t expect was the ease of reconnecting with a community that still feels accessible to newcomers and welcoming to new ideas.

In the five months between being awarded a fellowship at the Donald W. Reynolds Journalism Institute and moving here, I fretted about how to introduce my Talk Story, Write Story program into Columbia Public Schools (CPS) to help high school seniors write their way into college and earn scholarships to pay for it.

I had no contacts in the school system, city government or volunteer organizations. I knew fewer than a dozen residents, and had been out of touch with them for decades.

But affiliation with RJI and the University of Missouri School of Journalism opens doors. Before I arrived on September 1, RJI Executive Director Randy Picht had vigorously advocated on behalf of Talk Story, Write Story at the Columbia Daily Tribune. The paper’s president and general manager, Andy Waters, and publisher Vicki Russell agreed to partner with us.

Picht also contacted Annelle Whitt, district coordinator of the school district’s Multicultural Achievement Committee (MAC), to explain that my cost-free, value-added program would assist CPS’s financially challenged multicultural students. Picht, a former Associated Press reporter and executive, also tracked down Whitt’s elusive home phone number and handed it to me on my first day with a “get to work” assignment.

Expressing surprise at my after-hours call, Whitt agreed to meet the following morning “for 15 minutes, that’s all I’ve got.”

Halfway through what became a two-hour brainstorming session with me and my husband, Dean Wariner, a retired teacher and newspaper executive, Mrs. Whitt interrupted: “I’m in!”

A month after arriving with an idea and RJI’s support, Talk Story, Write Story was almost ready to launch. Workshops about the project were held separately for mentors and students, and Hickman administrators matched pairs based on both groups’ autobiographical essays.

The former corporate lawyer and insurance industry executive then volunteered to advocate on our behalf with CPS Superintendent Peter Stiepleman. She also agreed to partner her MAC program with Talk Story, Write Story.

Within a week, Stiepleman had OK’d our one-on-one workshops at David H. Hickman High School. The following Monday, Whitt, Principal Eric Johnson and guidance counselor Todd Maher warmly welcomed us to a place that would be the hub of our mentoring project.

By then Dean and I felt like Lucy and Ethel from “I Love Lucy” trying to gobble up multiplying chocolates on the conveyor belt. We were thrilled that two of our three critical components — the Tribune and the school system — were on board, but did not know how to put into place our final one: 10 mentors and two alternates necessary to guide 10 Hickman seniors through the college and scholarship application season, October through March.

Fate intervened. A friend from our hometown of Hana, Hawaii, called to say he had a longtime friend in Columbia who might help. The following day, University of Missouri Chancellor Emeritus Brady Deaton emailed us and suggested coffee. Deaton and his wife, Anne, provided a dozen local contacts. We followed up. One email led to a group message that turned into a community-wide network crisscrossing multiple social, ethnic and economic lines.

The goal was to recruit volunteer mentors with experience in journalism so we reached out to the Missouri Press Association, the Tribune, the Columbia Missourian, the Journalism School faculty and in-house to RJI colleagues to help us fill our quota.

A month after arriving with an idea and RJI’s support, Talk Story, Write Story was almost ready to launch. Workshops about the project were held separately for mentors and students, and Hickman administrators matched pairs based on both groups’ autobiographical essays.

Along with trying for other scholarships, mentor-student partners now are laboring over eight rigorous multipart essay questions in the Gates Millennium Scholarship application. It is the gold standard by which most high school seniors’ scholarship essay questions are measured. Each Talk Story, Write Story Hickman student is academically eligible to apply for the potentially 10-year, cost-free award.

For Talk Story, Write Story’s mentors and their students, dozens — perhaps hundreds — of hours of hard work are still ahead before the Gates deadline at 11:59 EST on January 13, 2016.