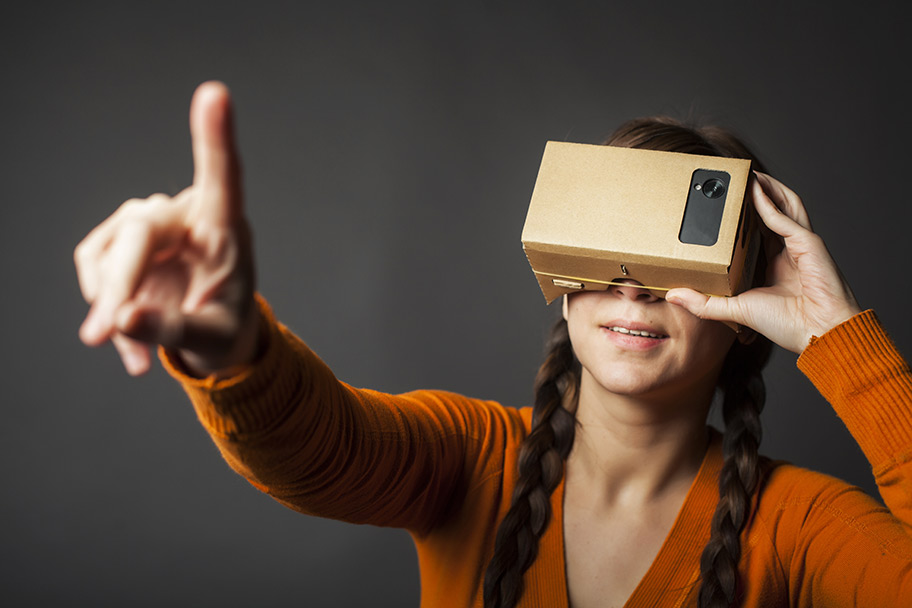 No textbooks. No PowerPoints. No crib sheets from the previous class. This is teaching college?

The University of Missouri School of Journalism prides itself with staying one step ahead of the news industry, but the light-speed immersion of virtual reality this year tested the system to its limits. Thanks to a talented corps of students, however, we managed to cover it literally from all the angles.

By the end of July 2015, I had my fall class syllabus written and ready to go. It would be my third semester teaching the use of 3-D cameras for the Emerging Technologies in Journalism class, exploring a visual technology that offered the news industry an enticing level of hyper reality. Using funds from the Mizzou Advantage grant program and partnering with the MU Department of Architectural Studies Immersion Lab, previous classes were getting pretty good at producing news-quality video and stills with an assortment of 3-D cameras.

I realized that the high price of 3-D televisions and the annoyance factor of wearing 3-D glasses limited audience appeal, but my gut hunch was that appealing to the “sense of real” was so powerful that it could stimulate tweaks in the technology to make it more viable.

I was completely unprepared to watch our $1,500 widescreen 3-D television get replaced by a piece of folded paper. Google had touted its Cardboard viewer for Android for a year, but that meant little on a Millennial-dominated campus where iPhones are a part of the anatomy. Just about the time I hit “print” on my syllabus last summer, the Cardboard app was released in the iOS market and the virtual reality world was turned upside down.

Google Cardboard is the virtual reality equivalent to the Penny Press. Just as steam-powered presses put newspapers in the hands of the working class in the 1830s, smartphone-powered viewers gave VR to the masses. For less than $20, I could get a cardboard box that did about 80 percent of what that $1,500 3-D TV did. For the $1,480 savings, people seemed willing to give up a little quality.

My Emerging Technologies class started the last week of August with two Cardboard viewers, a hastily written syllabus and no cameras that would take 360-degree images. I made the students buy their own Cardboards rather than textbooks, and within a few weeks we had both a low-resolution Ricoh Theta M15 and a high-definition Freedom360 made of six strapped-together GoPros.

Adam Vogler is a very experienced photojournalist who became my research assistant in his quest to earn a master’s degree. Thank God he had the talent and time to figure out the operation of the cameras and the Byzantine editing protocols of VR while I focused on teaching students to tell the story in a new way.

In that first 15-week semester, Adam, my students and I became competent enough to produce short videos that, while not ready for prime time, were at least not laughable. We had enough experience under our belt to start the second semester in January with real production goals.

It was a learning process for both students and professor. We quickly learned that VR turns journalistic storytelling upside down – or more accurately inside-out. Journalists generally tell stories and always take photos from their own viewpoint. We point the camera or our notebook at the subject and tell the audience what we see.

Virtual reality, however, allows no pointing. You may have a wonderful interview of an attractive person, but the viewers can just as easily turn around and watch the sunset, or look up and see the birds as they can focus on your talking head. The control of the setting is in the eyes of the viewer, not in the eyes of the journalist.

We’ve had some hilarious shots of one of us scrambling for a hiding spot so the looming face of a harried journalist doesn’t distract the viewer. It was months before we learned to place text in the videos that didn’t look like a funhouse mirror. We also argued (and still argue) over how much of the story should be told by reporter voice-over and how much by ambient sound.

Editing together the six video streams from the GoPro Freedom360 is a nightmare for anyone on deadline. Images from the smaller Theta, however, come together quickly – and the little guy fits in your pocket like the Men In Black’s “flashy thing.” Now if we could just get the GoPro’s image quality from the little Theta.

It’s a work in progress and will continue to be one for some time yet. But all one has to do to know it is worth the effort is to hand a Cardboard viewer to someone for the first time. Their reaction almost invariably is, “Oh my gosh!” When was the last time you heard that when someone picked up a newspaper, turned on the news or opened a magazine? Virtual reality has some indescribable effect on people that we in journalism must quickly master or be run over by those who do.

Watch the three-part project on diversity by Mizzou VR Journalism on YouTube. Also try the Mizzou VR channel on Littlstar for videos produced by Bentley’s Emerging Technologies in Journalism class.