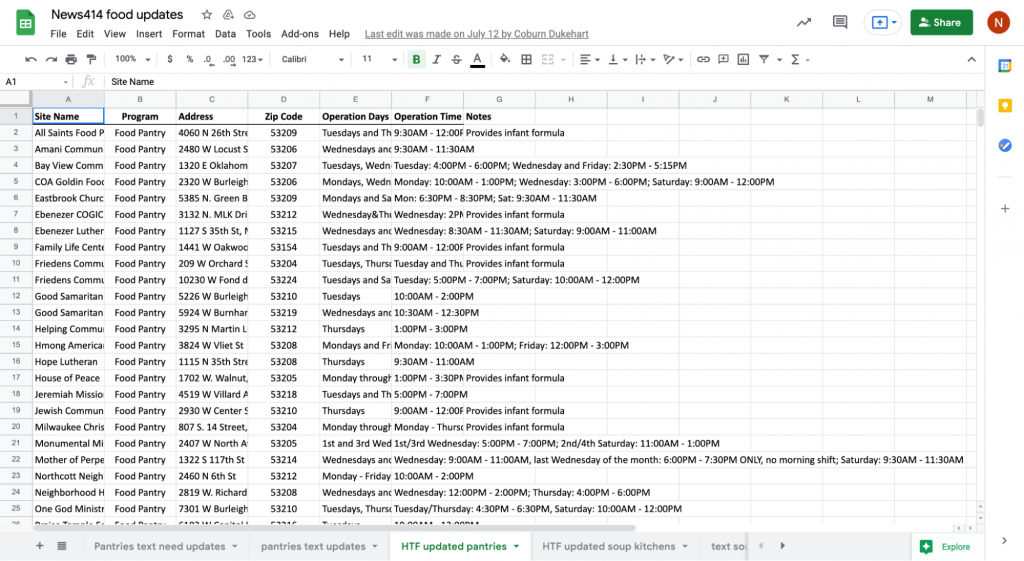 Over the past few months, the Wisconsin Center for Investigative Journalism, in partnership with Milwaukee Neighborhood News Service has been developing a spreadsheet full of resources for those struggling to afford food during the pandemic in the Milwaukee area.

Using current data on hand, it was compared and updated based on the data that Feeding America had collected, creating a master list of different pantries. This sheet provides the name, address, as well as days/ hours of operation. The most important detail on the spreadsheet is the inclusion of the ZIP code for each establishment, making it easy to know what resources a person has nearby. This data however won’t be used for an interactive map. Instead, it will be added into the Public Input system.

Public Input is a texting system for readers to get in touch with journalists or to help them find resources for housing, food, jobs, civic engagement, and COVID information through texting “MKE” to 73224. Having this master list now incorporated with Public Input will now provide the option for a person to text their ZIP code and then receive a text with a list of all the pantries in the surrounding area.

The first text push was sent out on July 16. The text message was sent out to 1,266 numbers. It resulted in 38 respondents, 16 completed surveys, two comments, and eight conversations with a reporter. On top of actual responses, there were 133 clicks on text, showing that while some didn’t respond, they now have information for the future.

“Updating our food pantry database required meticulous work, but it’s a crucial piece of our efforts to direct Milwaukee residents to the information they need — particularly during this time when too many are struggling to afford food,” said Jim Malewitz, Wisconsin Watch editor who helps lead News414. “This has been one of the most widely used resources in our texting system, and we’ll be sharing the information online and on social media as well.

“This is also an example of how collaboration can add value for a community: Two food resource groups were already collecting this information and creating slightly different databases. We built upon that work by combining that data and finding a way to boost its accessibility.”

The information for food resources was included in resource texts with other stories, rather than having its own push. However, since its creation in the spring, 236 individual texters have used the food service, with many using it multiple times. After the update in July, 14 individuals have used it.

We expect the number to grow. This text push is part of a broader strategy of creating more engagement around food resources, including keeping their web page updated.

A text service such as Public Input gives smaller newsrooms the opportunity to combine with other resources in order to spread the word about helpful initiatives to improve their community and build trust between the reader and newsroom.