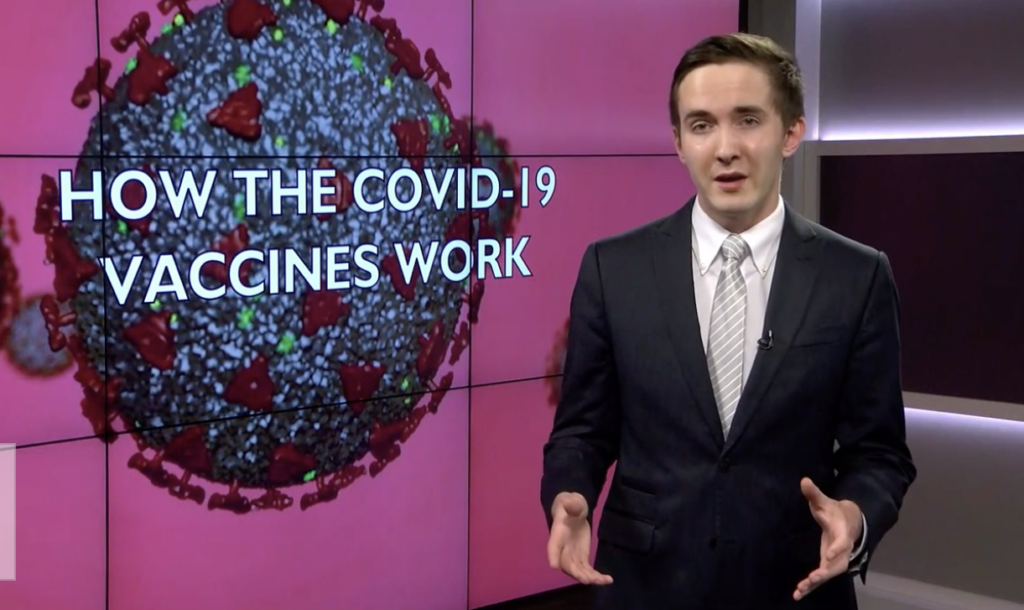 For Innovation in Focus this month, we partnered with mid-Missouri’s NBC affiliate KOMU-TV 8 to incorporate augmented video editing, combining animation with video footage, into a news piece. Using this technology, we aired a story explaining how the COVID-19 vaccines work.

When thinking about the stories that could use augmented video editing, we looked for a story which we could tell visually. By doing this, we made sure the AR is used to help the viewer understand the information, not hampering or making it more complicated. We suggest using AR video editing only when you know it will further the story and aid the viewer.

For our animation we used Cinema 4D to create the visuals of the virus particles and immune cells. In this software we were able to create movement, alter color and create 3D design. The animation was then combined with the video we prepared of Matt speaking the reporter track in Adobe After Effects. We used this software with After Effects to be able to incorporate the 3D animation, which we would not have been able to do with just After Effects alone.

We knew that we wanted Matt to be on the screen with our animation to achieve the augmented video combination of Matt and the animation. In order to make sure we could get 3D video of him to be overlaid with the animation, we learned that Matt had to film in a green screen room, which had two walls and a floor of green screen.

Prior to filming, we also mapped out how we envisioned our animation so Matt could plan how to record his reporter track. We recorded versions where Matt would stand still and versions where he would walk around the screen to allow for transitions in the augmented video editing. We ended up using footage where he stood still so as to not provide more distractions to the viewers because the animation itself was moving as he explained the information.

Since we created augmented 3D animation, there were a lot of large files the software had to render. The main animation was created using a MacBook Pro, but we needed a lot more rendering power than what we could get on that laptop to complete it in a timely manner. We created a rendering farm, linking together computers using Cinema 4D Team Render Client. Before we set up the rendering farm it would have taken 72 hours to render the project, but with three additional laptops and six desktop computers we were able to cut down that time to 30 minutes.

Part of using new technology to tell stories is making sure that you’re being ethical and factual within the new creative ways of sharing information. We did a lot of double checking to make sure we were accurately representing what we were animating, rather than just making it as colorful or eye catching as possible.

Sara Dingmann is an RJI Innovation Student Staffer. Matt McCabe is a University of Missouri School of Journalism student.