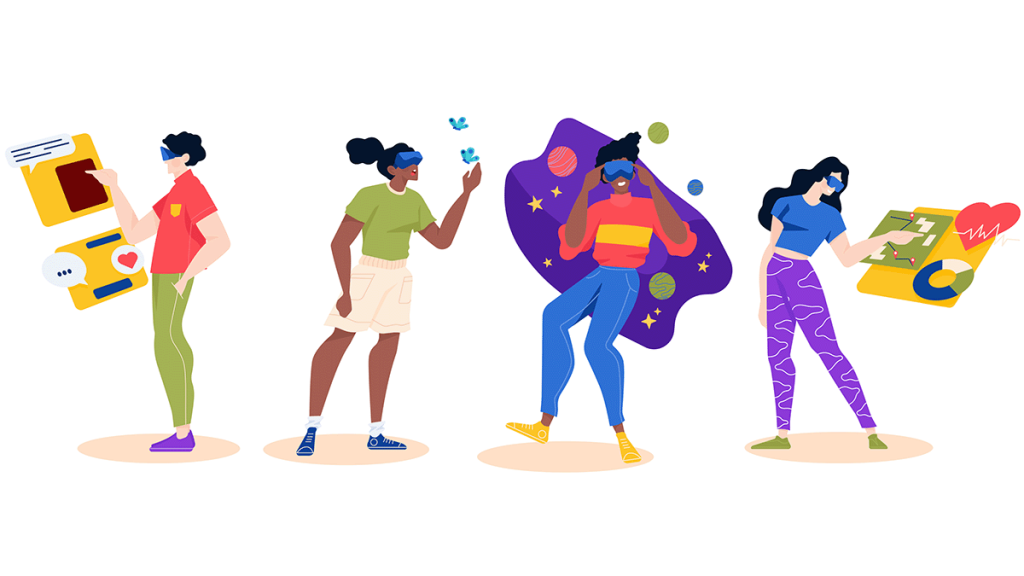 Laura Lorek remembers the 2000s-era hype of Second Life, a lifelike online platform powered by augmented reality. A journalist working for the San Antonio News-Express at the time, Lorek recalls attending an IBM press conference as an avatar reporter in the virtual world.

A relic of the digital era, Second Life’s global appeal came from its “very realistic world that you could immerse yourself into,” Lorek said.

This immersive appeal hasn’t been lost on news consumers. In fact, in the last 20 years, the world of journalism and the worlds of virtual and augmented realities — also known as “the metaverse” — married to produce a new wave of immersive, sharp and technologically-savvy storytelling methods, including VR and AR-powered documentaries, AI-supported data journalism and visually pleasing digital stories.

The future of the industry is shifting, as journalists’ attitudes toward technology like AI are welcoming. In an Associated Press survey of United States newsrooms, few newsrooms reported using AI regularly, yet “most indicated that they’d be willing to use automation and AI if it helped to reduce workloads.”

Throughout Lorek’s career in journalism, she has scouted the evolution of the internet, watching the online world shift and change. Now the founder and CEO of Silicon Hills News, a platform dedicated to entrepreneurial and technological news, Lorek emphasizes how the news media must adapt to the ever-growing multimedia industry in order to reap its full benefits.

“[Journalists] are really a part of the computing and AI convergence industry right now that is leading to a much more fast-paced development cycle than anything we’ve seen in the past,” Lorek said. “It’s not just virtual reality, it is reality. And we, as journalists and media, have to be players in this new world.”

How can today’s newsrooms foray into the metaverse world? The first steps happen in publication management. Lorek predicts that successful newsrooms will need to become more “experimental” in this decade, fostering “incubators” to test new technologies in storytelling.

Lorek believes increased project funding should be a key priority and cites The Washington Post’s latest tech initiatives, including its new Lede Lab, as a key example of forward-thinking management. The Post hired software developers and engineers, pairing them with journalists to embrace this new world.

“Our team’s mission is to identify and experiment with emerging technologies in the newsroom that help us report in new ways or build new experiences in which our audience can understand news,” said Elite Truong, Director of Strategic Initiatives at the Post. She noted the range of innovation that’s occurred in The Lede Lab including 3D modeling, which is portable and helpful to tell stories across multiple platforms. “Our 3D Tenement Museum story, which takes the reader through a tour of the oldest preserved public housing in the country in the context of the last pandemic, drove a record-breaking number of subscriber conversions and netted high reader engagement.”

More newsrooms need to engage in these kinds of experimental projects, Lorek said. But it’s definitely not a one-size-fits-all kind of approach. Truong notes that getting started and getting ongoing support is more than just being willing to try something new.

“It depends on the newsroom strategy. How are you engaging your audiences to begin with, and how effective is it?” she said. “We pair our most experimental story formats with topics that we know our audience wants to engage with more, including climate, wellness, technology, investigations and politics. The strategy with experimental storytelling can be quite effective for new lines of business, marketing and exploring user engagement even if it’s not traditional AR or VR.”

More newsrooms need to engage in these kinds of experimental projects, Lorek said. But it’s definitely not a one-size-fits-all kind of approach.

Lorek agrees and added that an increase in innovative, metaverse-powered storytelling could also lead to new subscriber and revenue models for the modern newsroom, as well as generate more interest from the public. She said that today’s consumers want “new things to look at.”

Creating an innovative story doesn’t have to be rocket science. Robert Hernandez, a digital journalism professor at the University of Southern California and self-described “hackademic,” said that apps such as Polycam and Snapchat make photogrammetry — technology that allows consumers to see images in 3D — more accessible to the general public. Journalists can use photogrammetry to tell stories with captivating 3D images.

New methods of storytelling can even sprout roots in a journalist’s own workspace. Lorek notes that today’s newsrooms are chock full of journalistic “gold:” extensive archives of older content that can be mined to create immersive, historical VR documentaries.

It’s not a new concept, either. In 2015, journalist, entrepreneur and Arizona State University professor Nonny de la Peña (also known as the “Godmother of Virtual Reality”) founded the Emblematic Group, an award-winning media group that partners with other firms in the industry and uses “cutting edge technologies” to create immersive environments for consumers to experience news stories and branded content, according to the group’s website.

The Emblematic Group’s journalistic creations are diverse and investigate a wide range of societal injustices, from violence against LGBTQ+ youth to “Hunger in L.A.,” the first-ever VR film to be shown at the Sundance Film Festival in 2012. The products are intimate and usually rely on eyewitness footage and audio, allowing consumers to hear their surroundings, see from a 360-degree point of view and interact with the story’s setting.

As these groundbreaking storytelling methods develop, the new generation of journalists is receiving metaverse content creation skills at colleges and universities.

Hernandez began teaching USC journalism students about AR storytelling in 2013. The next year, wearable Google Glass technology. And then, he completed research on 360-degree VR videography in 2015, the same year that he coined “JOVRNALISM,” a USC-affiliated media brand that produces student-led VR storytelling through a college course.

“The whole premise of [JOVRNALISM] is introducing up-and-coming content creators to new technologies,” Hernandez said. “We do a lot of collaborations and partnerships with the tech community that creates and invents this technology, but never thinks about content creation, let alone journalism.”

Hernandez said that JOVRNALISM primarily works with underrepresented communities and has produced “incredible” stories with limited resources. He hopes that the program, through covering such crucial topics, will inspire the industry to be more open-minded regarding innovations.

“We’re creating this stuff to show the industry what is possible, and that it’s not ephemeral junk food,” Hernandez said. “It’s homelessness. It’s climate change. It’s intimate partner violence; serious topics presented in this technology, to inspire [today’s journalists] to embrace it a bit more, to unfold their arms and be curious about it.”

Both Hernandez and Lorek said that leaders in the journalism industry tend to meet innovations, such as social media and blogging, with crossed arms.

As these groundbreaking storytelling methods develop, the new generation of journalists is receiving metaverse content creation skills at colleges and universities.

“We have a history in our industry of getting early access to this technology, and then we squander it by dismissing it,” Hernandez said. “I had a lot of leadership that said, ‘What’s the point of the internet? It’s a fad, right? It’s never going to replace print, print is where the money is.’”

Squandering opportunities is only one hurdle. The AP survey mentioned earlier reported that across all formats, newsroom managers “expressed concern that news organizations are unprepared for AI adoption,” while also noting a desire for low cost, low learning curve and low-maintenance systems.

Still, industry experts like Hernandez and Lorek insist that technology like AI will only grow faster each day.

“Only the smart [news orgs] are really getting it,” Hernandez continued. “They need to get ahead of the curve. If not, they’re going to be left behind.”

Aside from content creation, Lorek strongly advocates for cryptocurrency and blockchain education in newsrooms to help reporters understand the digital world, get ahead of the crypto learning curve and possibly implement it in some way. Concerning NFTs, or non-fungible tokens, newsrooms should be looking to get in on the ground floor, Lorek said.

“You want to do these things when you have the opportunity and when they’re low-risk and low-cost because once they get to be developed, it’s really hard to become a player,” Lorek said.

Among experimenting with content creation and revenue, Lorek recommends that newsrooms and journalists create presences in virtual spaces such as gaming platforms, as well as maintain an “entrepreneurial” spirit throughout the experimentation process.

“There’s just so much potential. It’s incredible when people say that journalism’s dead,” Lorek said. “I’m like, no, this is like one of the most exciting times to be a journalist if you want to be creative.”

Hernandez encourages journalists to change the culture surrounding new technology, to help the industry transform with new storytelling methods that are soon to become the norm.