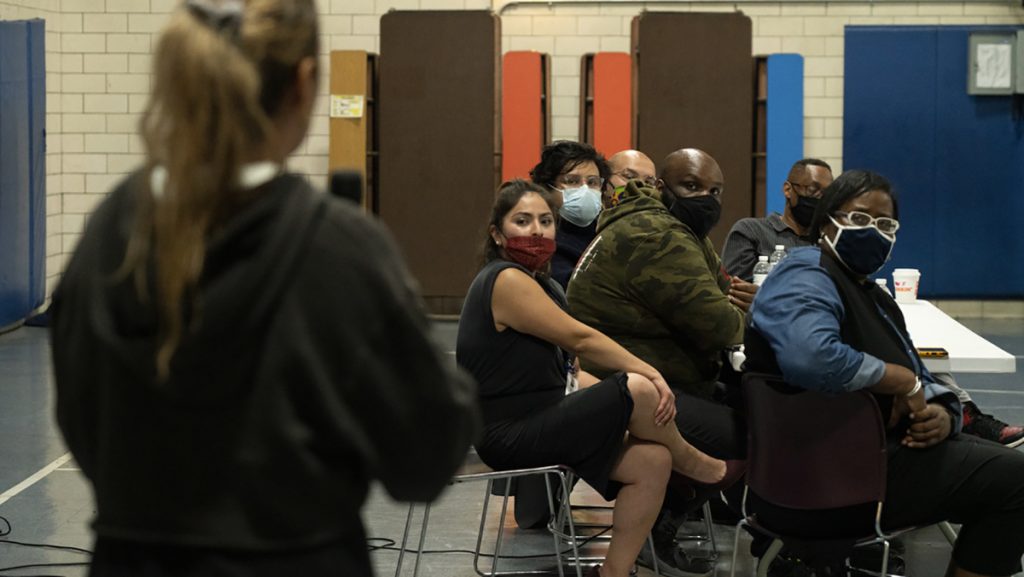 Yvette Castañeda addresses the panel of journalists at the Covering Your Community first event Friday, Oct. 8, 2021, at St. Agnes of Bohemia School in Little Village in Chicago. Photo: Raquel Zaldivar

Takeaways and feedback from our first conversation with communities in Chicago

After much anticipation, Covering Your Community successfully held our first community conversation about the media coverage of the Latino community in Chicago. For “Dissecting Coverage of Latino Communities,” on October 8 we met with folks in the predominantly Mexican neighborhood of Little Village.

About 35 people attended and shared their thoughts and feelings about Chicago journalism with our panelists, Laura N. Rodríguez Presa (@LAURA_N_ROD), Darcel Rockett (@DarcelTribune), and Will Lee (@MidnoirCowboy) of the Chicago Tribune, Evan F. Moore (@evanFmoore), formerly of the Chicago Sun-Times, Ismael Pérez (@_ismaperez) of the Sun-Times and Carlos Ballesteros (@ballesteros_312) of Injustice Watch.

While it was fulfilling to see members of the community engaging at the event, we recognize that we could have been better organized for the discussion and presentations of the coverage and the distinction between editorial board/columnists at a publication.

For future events, we need to be much more scripted and deliberate so the audience can better understand the relevance of what we’re sharing and the reason we are dissecting each report. There are topics we will revisit to ensure that the next event flows better and the conversation is rich.

Before the next event, we will further discuss our mission statement, revise the language and figure out how we can really drive home our purpose to the audience at the beginning of future events.

One of our major challenges at the event in Little Village was an interpretation from Spanish to English and vice versa as community members and journalists spoke. We did have people to interpret both languages, but it took a lot of time and often halted the flow of the discussion. Still, we recognize the importance of having the conversation in Spanish since we were specifically discussing the coverage of the Spanish-speaking immigrant community. More on this to come, and feedback is welcome if you have thoughts!

Time was also a challenge. We planned for the event to be an hour, give or take, but after our initial panelist presentations and the time spent on interpretation, we ended up going over because a lot of community members wanted to share thoughts and engage in conversation with the journalists. Since this was ultimately the main goal of these sessions, we allowed the event to run over. In the future, events might be scheduled for two hours, with the first hour being presentations and general discourse and then a social hour for breakout discussions.

We received a lot of comments, questions and concerns from community members who attended. Here are some of the main feedback points:

Dolores Castañeda (who helped us organize the event) and her daughter, Yvette, were two of the most vocal people in the discussion and reached out to us afterward. We asked Dolores and Yvette to write their own reflections about how things went at the first event and will be posting that on the Covering your Community webpage as well. We think it’s a great first step in creating some great relationships and letting people communicate their own thoughts and concerns through a channel other than in-person sessions.

One concern we heard from community members is that they wondered where all these discussion points talked about at the event will end up and how to really make a sincere impact on how publications cover their communities. We assured people we are here and we are listening and that this event is just the first of many. And the next step is to take this feedback to our editors and newsroom leaders to use it to make our journalism stronger in service to our communities.