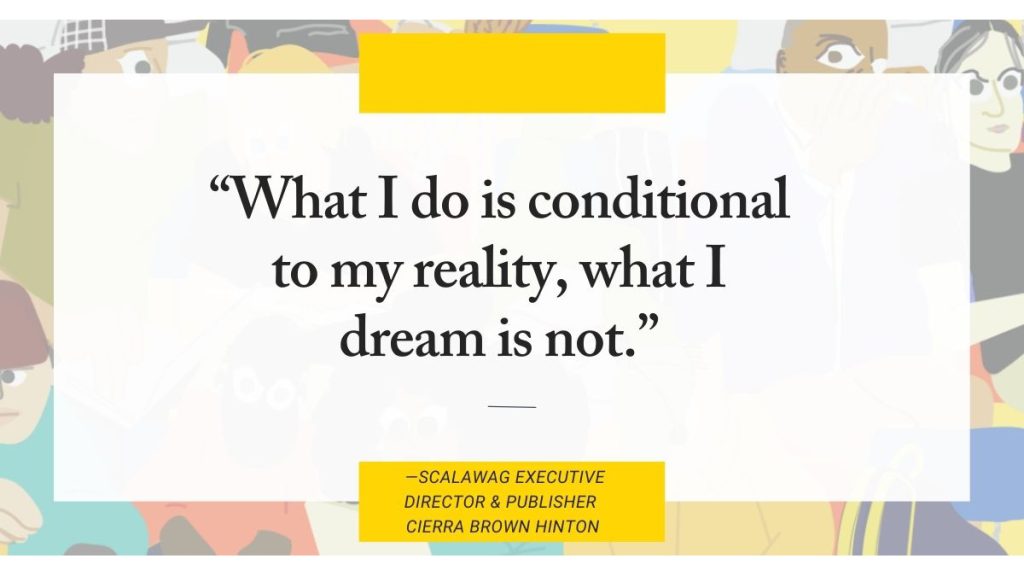 My mother is a retired teacher. While I always knew she loved me fiercely and that I was very special to her, I was also raised to understand that nobody is that special. We are all just people and it’s how we act that matters.

It’s impossible to get the balance between joy and preparation for a harsh world just right in child rearing. My parents are my biggest stroke of good luck, and I’m glad my mom helped me understand from an early age that it took a lot of work for anybody, including me, to be good at something. Competence was earned, not made.

I think being raised this way is one reason I’m so comfortable with incremental progress in my work. My goals are not audacious but they are difficult. I’m trying to help create more equity by building local news and information systems — and reduce harm with my reporting. I’ve always accepted that incremental progress might be the best I could hope to achieve.

But some people, without this conditioning, are using news and information tools to stretch far past incremental change. Cierra Hinton and the team she works with at Scalawag are using their work as a tool for Black Liberation in an attempt to help repair the South.  “What I do is conditional to my reality,” she said. “but what I dream is not.”

It is a shockingly pure act of faith to believe that our professional tools; observation, verification, storytelling and information distribution, could be up to such a difficult and necessary task. But Hinton has convinced me. Here is our recent conversation:

Alvarez: You are one of the few people I know whose work in journalism is aiming to be reparative. Why do you do the work that you do in the way that you do it?

Hinton: I don’t know that there’s any other part of the country that has been as harmed by media narratives than the South. 56% of Black people in this country live in the South. So you have this dual harm going on. The very real harm that the media has done to Black communities and the harm that the media has done to our region by flattening our collective existence here. It is very harmful, especially for the progress and social change that we’re trying to drive in our region.

We know that the most transformative and reparative change in this country has come from Black freedom struggles born from the South. That is why reparative work is important, here in particular. That’s why our theory of change starts first and foremost with, right relationship with communities and alignment with movements. Really doing our work in alignment with the Black radical tradition is supremely important to us, not only because of the identity of and the people in our organization, but because Black community struggles in the South are a proven birthplace of change.

Alvarez: What is the future you want to see?

Alvarez: That shouldn’t, but does, sound radical.

Hinton: Media is really a part of the state apparatus. That is what makes it radical to say, “No, we’re not going to continue to use media to uphold the white supremacist state, the patriarchal state, the capitalistic state. We are going to instead help people get free.” And like other liberatory tools, anybody can do media, anybody can do journalism, anybody can tell stories. I think we can tear down the gatekeeping that has been happening for so long, which keeps journalism exclusive to predominantly white wealthy men.

Alvarez: That’s great. I think most people who are working in journalism don’t think a lot about how reactionary their work is, and that only being reactionary makes it almost impossible to help build a better future. But if you’re focusing on repair, are you in some ways stuck in the world that we have today, because you are trying to make it better? How do you walk that line between reparative and reaction based work?

Hinton: Yeah. That’s a really great question. And I think the thing that immediately comes to my mind is a third word, “responsive.”

Hinton: We’re going to hire people across our region and their number one priority is going to be connecting with people and understanding what is happening on the ground. What are solutions and alternative ways of providing for folks especially in places where the state is failing them? Which as we know, are a lot of places right now.

Alvarez: What are you finding to be some of the most important functions of journalism in this new space that you’re creating?

Hinton: For us, it’s definitely like journalism as an act of solidarity. Training, for example, and allowing people to use our platform. The other thing that we’re really committed to is using our journalism to build consciousness. We want people to have a deeper understanding of the social issues we talk about. Waking people’s radical imagination up and showing them we can do something different, and let’s imagine together with that something different is.

Hinton: I think it works in environments where there is already a strong amount of civic engagement  too. It works for the people who have not been engaged and are not showing up. We’re talking about how we actually help create a democracy where people who are not wealthy white folks can participate and drive social action for social change.

Alvarez: I’m so appreciative of you and your whole team and the work that you do because you’ll say what it’s going to take to build a different future. But it’s not going to be easy.

Hinton: I know, everybody wants a quick solution! We need to figure out how we actually show up in the community in a way that’s consistent. We know that we have to be there and stay there.

This interview has been edited for length and clarity.