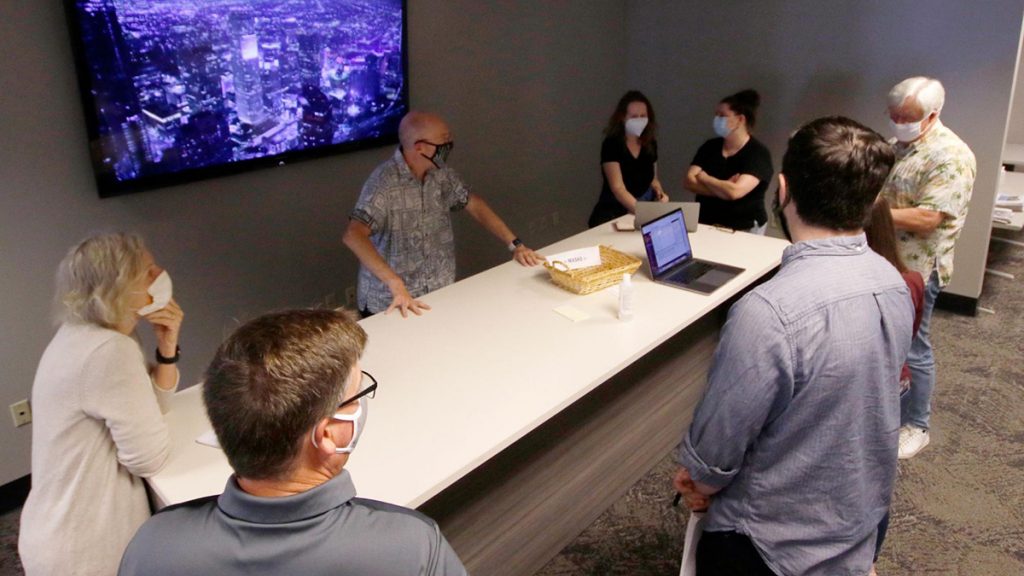 Editors and reporters from the newspaper, TV and radio stations based at MU hold a short daily meeting every morning to talk about areas where they can work together or use each other’s stories for the day’s news or bigger projects.

Working together should be simple.

As news organizations, we all do the same basic things even if our delivery systems are different. We cover events, interview people, mobilize for breaking stories, dig into enterprise.

But as anyone who’s really tried to collaborate with another news organization — or even another part of your own organization — knows, there’s a lot to figure out when multiple teams are involved.

Here at the Missouri School of Journalism, we’re experimenting with that now. We have a daily community newspaper (I’m the interim executive editor), an NBC affiliate TV newsroom, an NPR-affiliate radio station, an online business-focused news service and a monthly magazine.

To foster collaboration, we’ve moved into the same shared workspace. The goal is to produce stories on a regular basis that cross platforms and take advantage of our various outlets’ strengths.

As it turns out, the move was the easy part (relatively speaking).

Most of the complications were predictable, and at first glance may not seem like much to overcome. But when trying to change long-standing routines and disrupt workflows, everything matters. Even if problems seem minor, Neil Young reminds us, “that don’t make them go away.”

Broadly speaking, most newsrooms that don’t have a specialty focus have a similar overarching goal: to keep their audience informed and engaged.

But who is that audience, where are they and what are their interests? It’s an easily overlooked but hard-to-overcome problem.

In our case, the Columbia Missourian is a community newspaper with a fairly narrow geographic focus, largely Boone County. KOMU-TV is the NBC affiliate for much of mid-Missouri, territory that includes hundreds of square miles. Its geographic reach is more like KBIA-FM’s.

But KBIA isn’t as concerned with a lot of the daily machinations that can be the bread and butter of Missourian or KOMU coverage.  What’s vital news for one isn’t necessarily true for another.

The same technology that makes each organization work more efficiently can have the opposite effect when we’re trying to work together. Tech can produce silos that might work fine for one team, but not across multiple newsrooms.

Some of us share a content management system; some don’t. Even when we do, there are various channels within the system, and we can’t always access each other’s stories.

And while communication tools like Slack have their strengths, there are only so many channels a person can subscribe to before it starts to feel like Netflix: so many choices that in the end I’m spending another night with The Great British Baking Show.

When we start to talk about collaboration, we often think of our journalists as puzzle pieces (we can put Juan with Janine on this story or Olivia with Sarita on that one). We know our own reporters’ strengths and weaknesses, whether they work and play well with others, whether they’re best paired with someone who isn’t afraid to stand up for their own work, etc.

But when we need to pair a newspaper reporter with a radio journalist, for example, that level of thoughtful pairing takes more time together than we’ve had so far. Maybe they both cover health — so it should work, we tell ourselves. And maybe it will. Maybe.

Also, a print reporter may not yet understand the needs of a broadcaster who lives and dies by video. Such as the importance of not saying “yeah,” “uh-huh,” and all the other things we print people say to keep people talking because we don’t have to care about audio. These are skills our staff will learn as they work together over the next few months.

None of this takes into account the other things that working with people brings to the table, from territorialism to the desire for exclusivity, or the simple comfort that comes from holding on to long-held routines.

In our one newsroom, we’re going to be tackling these (and more!) challenges over the coming months. We’ll share what we learn collaborating across newsrooms, and we’re hoping you can share your successes and failures with us, too. Drop me a note at horvitm@missouri.edu.