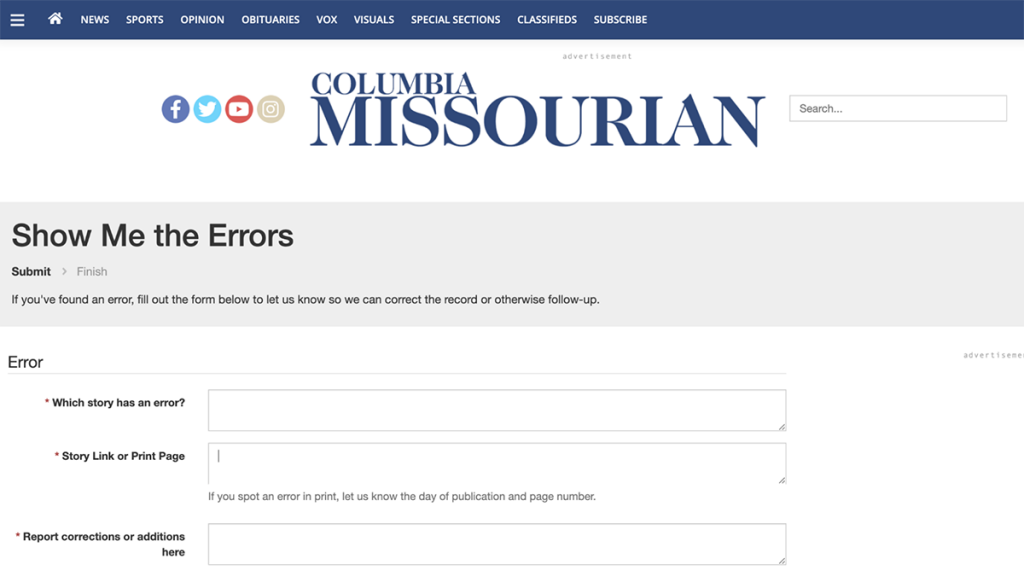 When content is shared, there needs to be a plan to quickly create corrections across all outlets

A basic tenet of the One Newsroom is that content is available to be shared across all the five professional newsroom’s sites at the Missouri School of Journalism. Sometimes it is a shared project or collaborative story, but a lot of times it is a newsroom choosing to use a story from another outlet to avoid duplicating efforts while providing content relevant to its audience.

More sharing comes with additional challenges. One of them is the importance of ensuring corrections get to all outlets that publish the story.

Accuracy is the most important thing we teach our students, and the Columbia Missourian has policies in place to avoid errors as much as possible on the front end. Before a story is published, a reporter completes an accuracy check with sources to confirm the accuracy of quotes in context and any facts attributed to the source. The reporter also checks all names and verifiable facts.

But errors still get through from time to time, and we are transparent about correcting stories online and in other formats. A correction box is placed at the top of the story online.

We also want to make it as easy as possible for readers to report errors. The Missourian has a custom form on its website for readers to submit corrections. It generates an email that goes to all Missourian editors and includes the link to the story at issue. KOMU has a tagline at the end of all online stories that encourages readers to email errors to the main news email account.

After we all started collaborating, we started to see that the Missourian would receive a correction to a KOMU story running on the Missourian site, or KOMU would be alerted to an issue with a Missourian story on its site. The digital editors would communicate and work out a correction, but we quickly realized we couldn’t rely on those two people always being available. In addition, we were likely missing placements of stories on other sites, particularly KBIA.

We needed a workflow for updating our other newsrooms about corrections and other updates made to articles. This is not an uncommon issue. Wire services and newspaper chains, like McClatchy and Gannett, have systems in place to alert sites to corrections. But on a smaller scale, it was a bit of a delayed realization that we didn’t have a system in place.

Here are some best practices we implemented:

Create a way to communicate all corrections as soon as possible

Outside of wire services, the standard of communication we’ve found has been utilizing email listservs that go to all the same organizations that received the stories to cross-publish.

Pam Dempsey, executive director of The Midwest Center of Investigative Reporting, said the center has built relationships with its partner newsrooms and contacts editors one-on-one about stories relevant to their audience. Partner newsrooms also share when a story is published. Dempsey said that tracking makes it easier to reach out to publications when there is a correction.

Jason Hancock of Missouri Independent says his publication does both, sending a blanket correction to the listserv and contacting individual editors who he knows have republished the story.

Alert the group for all errors

When we implemented our listserv, we instructed editors and digital teams to email about every correction to this list. The emails include the headline and link to the updated story. We ask the other newsrooms to check their sites for the story, and if the story appears on a site, editors or digital producers should update from syndication for sites using the TownNews CMS or, for KBIA, copy and paste the updated story to replace the existing one.

In the future, if the One Newsroom moves to a common messaging system such as an enterprise Slack or Microsoft Teams, we will likely utilize a channel or group to communicate these errors instead of the listserv.

The Missourian, KOMU and Vox use a common content management system, and we share content using a syndication tool. A story isn’t available in syndication until it is in a published workflow from the originating site. If a site is using a story before it’s been through the standard editing process, there is a greater chance of error.

Missouri News Network provides stories from the state legislature to Missouri Press Association members. Mark Horvit, director of the Missouri School of Journalism’s statehouse reporting team and the state government editor for the Missourian, oversees the network. The stories are published first in the Missourian and then picked up by other papers around the state. Most of those community newspapers are on a weekly publication schedule. Typically, if there is a correction on a story, it can be made before those stories are published by other papers.

The Midwest Center for Investigative Reporting often publishes stories in partnership with the USA Today Network where the stories are available only to the network for the first 10 days. In those cases, the USA Today Network would communicate any corrections to its publications, and those corrections are made before another news outlet would publish it directly from the Midwest Center website.

Dempsey also says they assume partners aren’t making significant edits to a story. A publication may make some changes based on style or adjust a headline for its audience, but the center trusts outlets won’t mistakenly insert an error in their editing processes.

There are many steps in figuring out the best ways to collaborate and share content, but it is easy to overlook the important step of also sharing corrections. Based on the experiences of the One Newsroom and other news outlets sharing content, best practices include being transparent about corrections on content, having a way for readers to submit corrections and then establishing a contact method to let all publishers know about every correction.