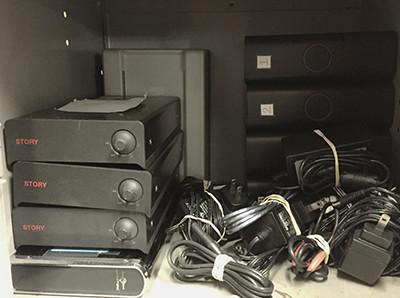 Let’s return to the Columbia Missourian’s photo desk. Aside from not knowing which drive or disk might hold a certain photo (including which set of connector cables and power cords to gather), there was a much bigger problem: There was only one copy of each photo file stored on a drive or disk. A crash on any drive would result in permanent loss. A spilled drink, stray elbow or power surge could spell doomsday for thousands of unique and irreplaceable images. Hasta la vista, baby. Gone. Forever.

We needed to copy these photos — at least once. In consultation with Justin Giles, RJI’s IT support specialist, the files were copied over to a Redundant Array of Independent Disks or RAID-based system. Specifically, we purchased a Drobo 5n and filled it with five 3-terabyte (TB) Seagate Barracuda hard drives.

Placing the image files on a RAID system accomplished more than if we had simply duplicated all the CDs and hard drives:

Mission accomplished? Photos archived? Not even close. According to the Levels of Digital Preservation chart from the National Digital Stewardship Alliance (NDSA), making copies of digital objects does not in and of itself create an archive. For ultimate peace of mind, NDSA includes four levels of preservation activities in each of the following categories:

For example, at the first level of preservation in the storage category, NDSA specifies the following:

These level-one objectives are within our reach: By duplicating all images from all disks onto the Drobo, we now have two complete copies. We kept all the original drives and their contents in a separate room in the Missourian, so the copies are not in the same location. It would be even better to move those drives to a clean, cool, dry, geographically stable and secure location many miles from Columbia. (There are old salt mines that rent out space for this exact purpose.) Image data that was scattered among CDs and individual external hard drives is now residing on the Drobo. One small step for the photo department, one giant leap for the Columbia Missourian. Even this modest set of actions means that, in the future, Missourian staff and readers who need archival photos will be more likely to find them.

Next: We’re already running out of space. Now what do we do?