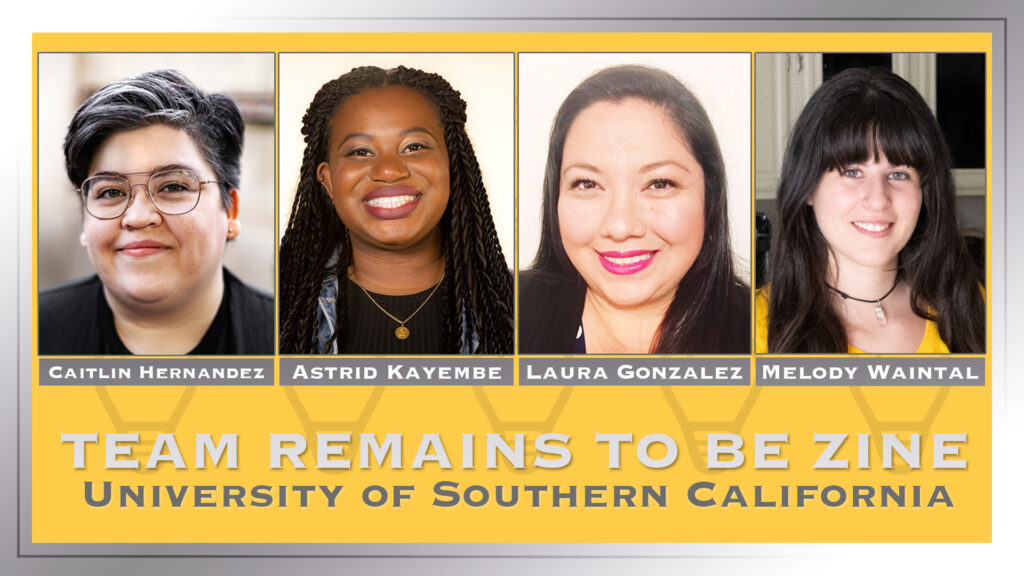 A student team that partnered with L.A. Taco, a digital-only news source in Los Angeles, to create a collaborative community ‘zine’ (short for magazine) to help with engagement, won the 2020-21 RJI Student Innovation Competition.

“Remains to be Zine,” which was made up of Caitlin Hernandez, Astrid Kayembe, Laura Gonzalez and Melody Waintal of the University of Southern California, won $10,000 as part of the 14th annual journalism competition hosted by the Donald W. Reynolds Journalism Institute at the Missouri School of Journalism.

NYU Epicenter of New York University, who partnered with the Epicenter NYC newsletter, won second place and $2,500, while The Fantastic Two of the Missouri School of Journalism won third place and $1,000 after collaborating with the Missouri Business Alert.

Remains to be Zine

Remains to be Zine’s project included producing content and live events with the community to be incorporated into zines, which will be available in both digital and print format.

During research of the news platform, which covers news, food, culture and the community, the team learned that the organization’s Facebook page had the lowest number of followers and lowest engagement rates of the outlet’s platforms. According to Pew Research, Facebook is the highest used social platform.

Research also showed that some parts of L.A. Taco’s target audience, which is Latinx Angelenos, is impacted by the digital divide, so the team wanted to find a way to make content more accessible to reach folks both online and offline.

They launched virtual events on Facebook as part of their engagement project. These events included a cooking demonstration of frijoles that was based on reader submitted recipes. Readers were also asked to submit stories of memories of their families cooking beans.  They also did an event where they interviewed a street vendor about her experience and how she was faring during COVID-19. She expressed some concerns with safety to street vendors.

Kayembe said these were opportunities for L.A. Taco to engage with the audience on Facebook. Both Facebook events reached more than 4,000 people and accumulated more than 600 engagements including reactions, comments and shares. The events attracted about 2,000 views. Since the events took place on Facebook, the recordings will remain on Facebook for viewers to watch at a later time. L.A. Taco acquired more than 50 more members after the events.

The upcoming zine will be filled with both short community-submitted recipes and stories about people’s history with frijoles. The team will also be writing evergreen stories about L.A.’s top food influencers and features about local restaurants. They will also adapt some of their conversations with the street vendor and her safety concerns.

The zine will include some interactive features such as a QR code that people can scan to get a walking tour to specific street vendor hotspots. There will also be QR codes that will lead people to videos of street vendors sharing their stories.

The zine will be sent to existing members as a gift and used as a draw for more membership signups. Other print copies will be distributed to other parts of the community including libraries, community centers and restaurants.

“Our winning team really showed the full range of engagement opportunities for newsrooms,” said the judges. “With their digital events, social media strategy and printed zine, this team demonstrated a commitment to listening to and understanding the information needs and challenges in the community they are serving.”

If other newsrooms are interested in doing a similar project, the team recommends:

Team NYU Epicenter worked with Epicenter NYC, a newsletter that launched during COVID-19, to develop a transferable toolkit that could be used by any newsroom that wants to improve reporting and engagement with its community.

In this particular case, they used the toolkit to report on the COVID-19 crisis. The team, which included Xavier Bartaburu, Alex John Beck, Noni Aleena Ghani and Ralph Thomassaint, focused on small businesses in Queens, New York, to see how they were surviving the crisis.

They came up with “a network beat” by creating a “daisy chain” where one small business owner in Jackson Heights would nominate another and so on until there was connective tissue in the community, the team said.

Epicenter staff currently worked on a campaign to get essential works and anyone else eligible for vaccines registered since the current registration system is confusing, time consuming and unintuitive, says Aleena Ghani.

In the process, the student team asked one of the restaurant owners if he and his staff needed a vaccine and they were able to get the entire restaurant staff and his family vaccinated. Word spread and other restaurants and taxicab companies approached the Epicenter to get help in getting registered.

“This illustrated the many different pathways, projects and connections this project can create organically,” said Aleena Ghani.

They shared the following tips for other newsrooms that want to do something similar:

Graduate students Indah Setiawati and LaRissa Lawrie worked with the Missouri Business Alert, a news source that delivers top business news from across the state of Missouri. MBA staff has an ongoing desire to drive more traffic to their website and know social media could help. After an analysis of the social platforms, the team decided they should focus on Instagram.

Wanting to increase MBA’s Instagram audience engagement, the team created a series of content for Instagram Stories and posts. They made a Qualtrics survey that collected basic information and four questions about challenges and lessons in doing business to create user-generated content in the form of storyboards for Instagram and other social accounts.

They reached out to business owners via email and invited them to be guest contributors for the series “Lessons Learned,” which highlights businesses and shares direct quotes from business owners on Instagram. At the end of the post, there’s a call to action to encourage the audience to read a longer story on the website. According to the team, Instagram engagement has seen an increase of 1,000 percent in the past month.

The team created Lemonade News Resources to help other newsrooms replicate this type of work with Instagram, social media audits, surveys, user-generated content and email outreach. They have ideas for other newsroom guides they’d like to create including “How to make social media work for your (small) newsroom” — with funding they received from the student innovation fellowship.