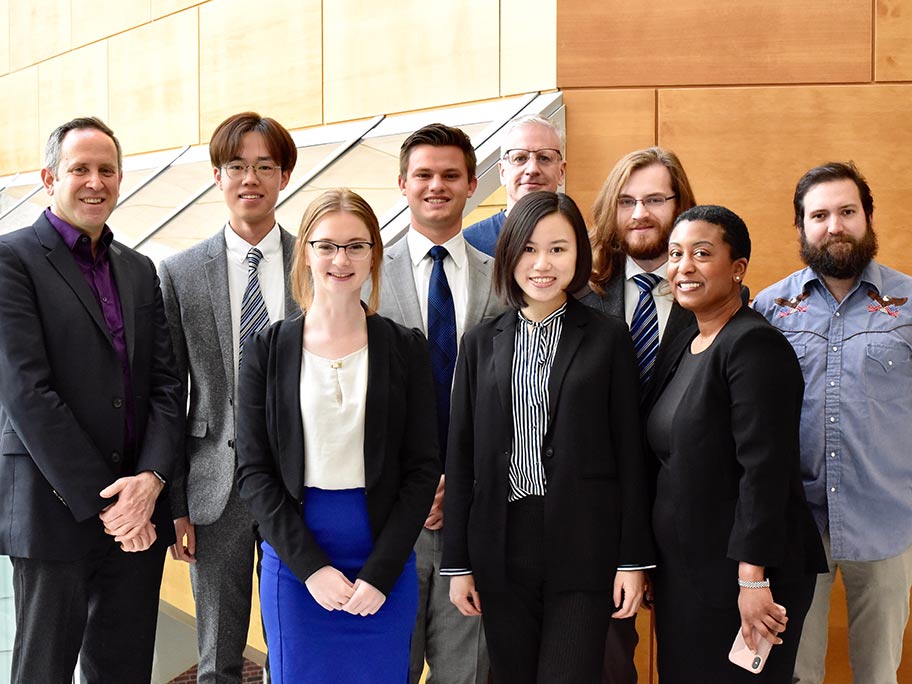 A photo verification solution to restore trust in news images, developed by a team of students from the University of Missouri and Truman State University, has won the 2018 RJI Student Competition.

VeriPixel emphasizes integrity, transparency, authenticity and reliability to the images we see in newspapers, magazines, television and the web. Currently there is no industry standard to verify photographs or video.

The solution uses blockchain technology that enables news organizations to verify images that may have been sent in from journalists or the public over open networks. It also allows the reader to use the same technology to verify the image that they’re looking at online.

“Technology helps us determine veracity and fight fake news,” said competition judge David Kurpius, dean of the Missouri School of Journalism. “(VeriPixel) is a unique solution to this problem.”

The five-member team didn’t know each other before the start of the competition. Fries and Thomas found each other at TigerHacks, a pre-competition hackathon, their backgrounds complementing each other. Fries attended the hackathon simply to support and encourage classmates from Truman State.

“I was going to work on homework the whole night,” he said. But a hackathon participant began asking him questions about his cryptocurrency class, and encouraged him to participate.

It was at TigerHacks that he got the idea for VeriPixel. “I started thinking about some of the things we were doing in cryptocurrency, and it just hit me,” Fries said. “I found Rachel; Rachel found all the other members of the team.”

Together, they started brainstorming and when Wu heard the idea, she knew there was a need. “Definitely something we should have in the photojournalism field,” Wu said.

The judges also acknowledged that the team identified a real problem facing journalists and editors.

“It’s a known problem and they’re (working to develop) a technical, efficient, meaningful way to solve it,” said judge Jeff Shackelford, director of Digital Sandbox at the University of Missouri-Kansas City. “A real problem and a viable solution.”

Next steps for the team include a trip to New York City to meet with media and technology experts and leaders.

“This year’s competition is awesome with students paying very close attention to verification of information, how to build trust with audiences and using technology such as APIs and digital platforms to solve issues in journalism,” said Ebony Reed, director of innovation, the RJI Futures Lab and the Student Competition. “They worked hard for the last few months with intense mentorship and I’m very proud of all of them.”

The other teams in the competition included:

Team Jouraph: This tool provides data visualization of how stories spread across networks, both topical and via the web. Jouraph focuses on how a story interacts with other organizations in a network – not just the volume of shares and views. It is designed to track the flow of information, not the flow of the user. Team members are Christian Cmehil-Warn, computer science, statistics; Megan Hill, strategic communication; Derek Howard and Jonah Zukosky, computer science; and Caroline Watkins, convergence journalism.

“The collaboration from computer science, journalism and business students is very much needed for journalism,” Reed said. “Many of these students are juniors and seniors, and any news organization would be lucky to gain the talent of these students on their news, technology or product-business development staffs.”

The judges of the 11th annual student competition included Elizabeth Loboa, dean of the University of Missouri College of Engineering; Brian Hamman, vice president of engineering at The New York Times; Camille McAuley, director of the national engineer group at AT&T; Kurpius; and Shackelford.

The RJI Student Competition is a collaboration between the Donald W. Reynolds Journalism Institute, the Missouri School of Journalism, MU College of Engineering and the University of Missouri Trulaske College of Business.