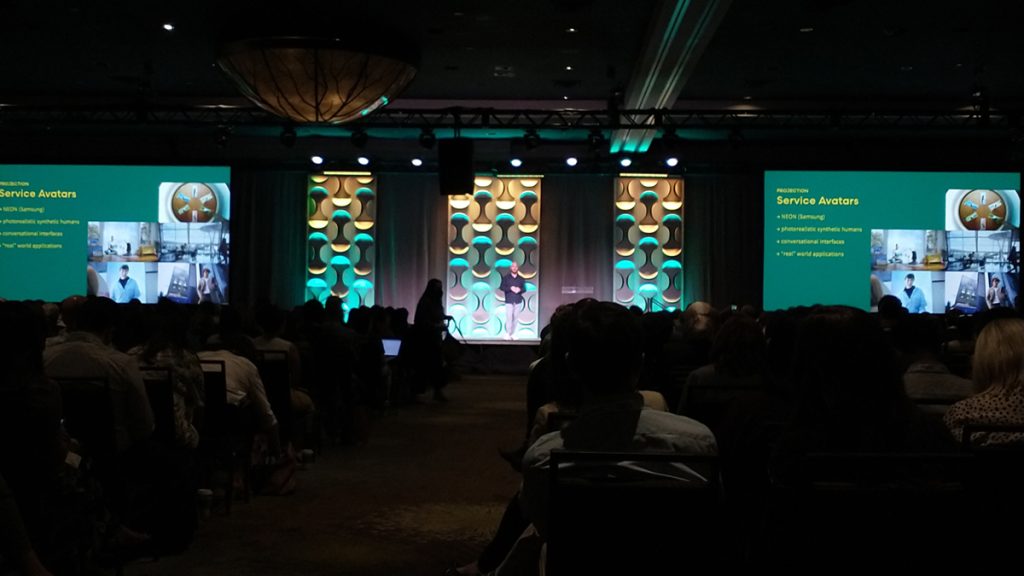 LOS ANGELES (Sept. 23, 2022) — At the 15th annual Tech Trends session at ONA22, Anders Grimstad of the Schibsted Futures Lab in Norway laid out the case for a future journalism industry defined by artificial intelligence and synthetic media.

Grimstad covered a number of innovations in AI-assisted writing and content generation that he expects to occupy an increasingly pivotal role in the industry. Of particular note for reporters and editors in an ever-more multiplatform news ecosystem, he highlighted products like Copysmith, which can save newsrooms time by adapting written content for different digital platforms.

“No journalist wants to write ten versions of the same thing for different platforms and different people,” Grimstad said. “This technology can render one input into multiple outputs, creating different versions of content across devices and across media types without compromising truth or straying too far from the original content.”

Grimstad also called on journalists to embrace the so-called “metaverse,” an increasingly high-profile push from big tech firms and digital innovators to join their audience’s physical and digital lives into a unified experience. He noted that during the COVID-19 pandemic, Minecraft hosted Norway’s Constitution Day celebrations for 37,000 people, successfully using a digital medium to bring audiences closer to a newsworthy event.

“If we want to live in this kind of optimistic framing, we need to build it ourselves. Take action. Build your own future.”

The fact that Minecraft — a video game — successfully leveraged this approach framed what Grimstad presented as a crucial choice for the journalism industry as a whole: whether to embrace these new forms of virtual experience, news presentation and content production or to let organizations outside the industry take the lead. More specifically, he noted the difference between reporting on the possibilities of the metaverse and taking an active part in its evolution.

“The way we talk about the metaverse today echoes how we talked about the ‘information superhighway’ and ‘cyberspace’ in the ’80s and ’90s,” he said. “While the broad strokes of those predictions kind of came true, a lot of what we were talking about didn’t pan out. The lesson there is don’t spend too much time on the visions of what the metaverse could be. Spend time on the technologies that are being developed to support that future.”

Ultimately, Grimstad offered two possible scenarios for the impact of emergent AI, 3D and synthetics-driven technology on journalism. In the first, the industry is slow to adopt and adapt these technologies, losing out on the chance to take a leading role in shaping not only the tools themselves, but the regulatory and ethical framework in which they exist. As a result, audiences drift away from professional journalism toward new mediums and devices without knowing who or what to trust.

In the second, more optimistic scenario, journalists gain a seat at the table and pioneer tools that clarify the origins and creators of content, becoming a source of trust in an era when distinguishing truth from manipulated content is more difficult than ever.

“If we want to live in this kind of optimistic framing, we need to build it ourselves,” he said. “Take action. Build your own future.”