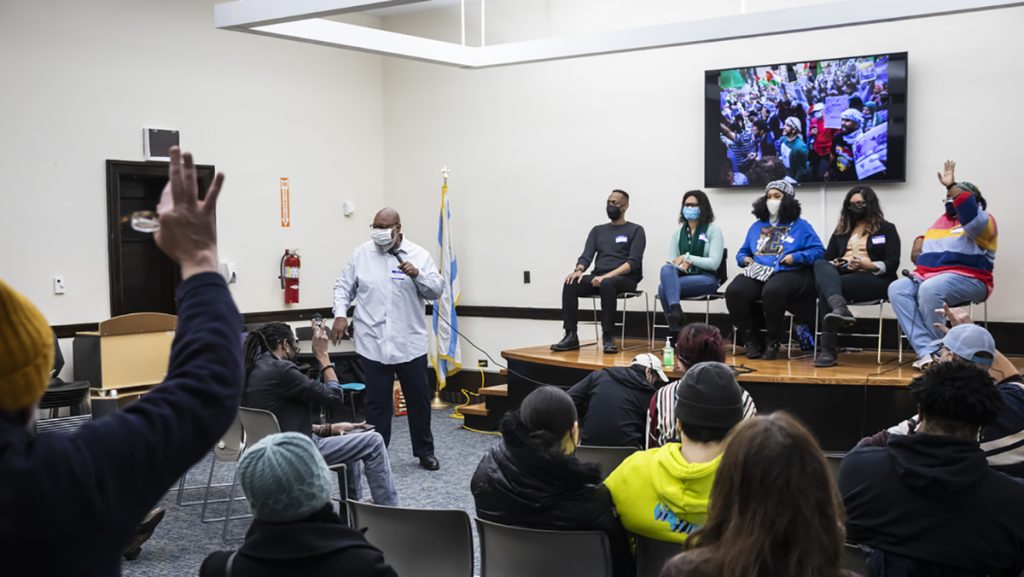 The best teacher for future community conversations? The last event

The Covering Your Community project continues with planning for a sequel to our Englewood conversation in January.  For that event, we didn’t have a particular topic of conversation other than the goals of transparency and media literacy, receiving criticism, feedback and story ideas, and to forge new relationships with community members. The conversation naturally gravitated toward how Chicago news media can perpetuate the idea of “bad neighborhoods” when it comes to covering crime, especially gun violence, and this only perpetuates disinvestment. A major part of the discussion involved talking about alternative ways to cover violence that involve historical context, humanity and avoiding stereotypes, as well as addressing violence as a symptom of neglected communities, not just something “bad people” do.

“I also believe that hurt people hurt people,” one community member said. “There are no bad people. There are mentally ill people, there are disabled people, and we all have our mental health weaknesses but we have to look at the story and sometimes it goes back multiple generations, because if we went around this room right now and we all shared what’s happened in our family, the trauma and if we’ve benefited by racism and oppression, we would find that we all have had a lot of violence, a lot of alcoholism, a lot of people cheating on their wives, child abuse, a lot of things that actually define who we are. If we don’t present it as part of the context then it just looks like a bad person doing something to a bad person in a bad neighborhood.”

Tonika Johnson was the person to bring up “If it bleeds to leads,” something she said she was taught at Columbia College Chicago when she was a student there and apparently also taught to some of the more seasoned panelists — an example of that old school mindset that we really should be far from at this point.

I am building upon my previous piece to add specifics about how this particular event taught me a lot about organizing and holding a successful community conversation:

Connecting with established organizations, groups and individuals within the neighborhood while planning events

Having a focus, talking points and/or topics/issues specific to community members

Finding a venue where people in the community already gather

What do we as journalists specifically hope to get out of this event? How will we implement change in our newsrooms?

One of the reasons I did this project is because there was a lot of talk in the Tribune newsrooms about, yeah, diversity, and we need to reach a more diverse audience and we need to tell better stories, etc. So we’d have Zoom meetings every month and then like…nothing would happen. So I found this as an opportunity, we can actually meet with the community face to face, get your feedback, which we can take back to our editors which, you know, there’s only so much we can do to sort of incite change but I think this is a good starting point and even if an editor is not going to be on board with something you said, you know, we can make changes in the way we do our daily work. The other thing we’re always talking about is that we need more subscribers…it’s like ok, well then we need to cover these underserved or never served communities or no one is going to be on board with us.”

As I build this toolkit, I welcome feedback from other journalists who plan to use it. What questions and needs do you have? What do you want to know about my process? What would help you dialogue with your community?

The goal of Covering Your Community is for Chicago journalists to have a conversation with members of the community about current and past stories, to be transparent about the publication process and to hear from community members about ways we can improve future stories. We want to establish a regular dialogue with people in our communities and learn what is important to those people. We want to forge new relationships and reinforce current ones.