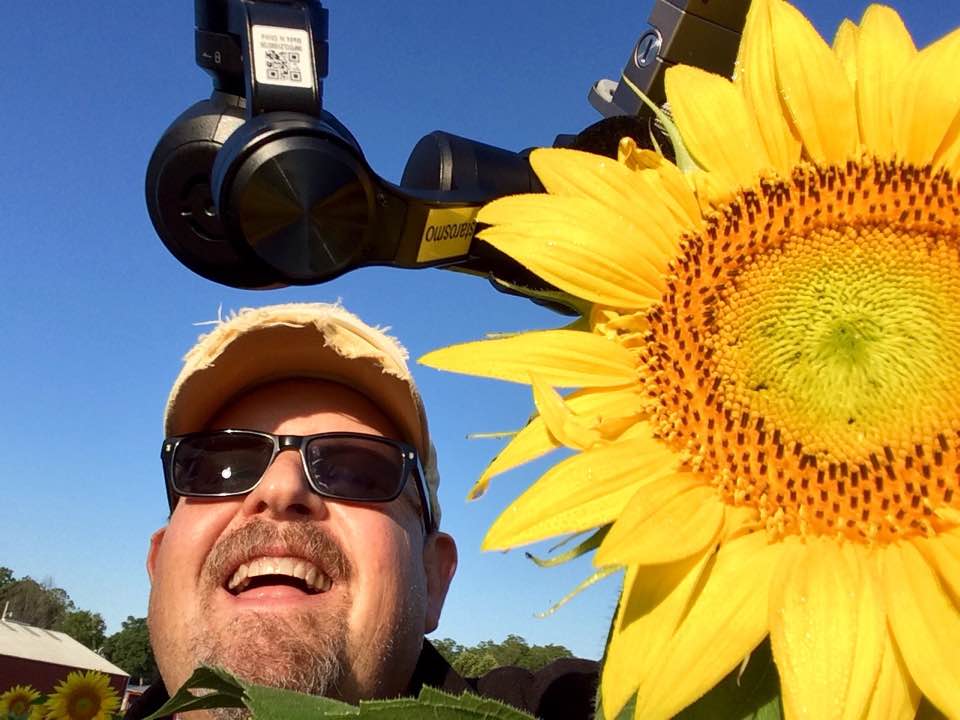 Kummerfeld: What gimbals do you use now in the newsroom and why did you pick those?

Davis: One of the first gimbals we bought was the Osmo and that was our first introduction into using something with a gimbal. It just had that real butter smooth feel to it, didn’t have any shakiness to it at all. And then for myself, I went ahead and bought one of the Osmo Mobile 2s, and I like to shoot my B roll with it because I hate tripods. I’ll use a tripod when I have to; if I’m doing an interview with somebody or something that just absolutely has to be lock steady. I generally find myself in fairly tight places, whether I’m behind the scenes for somebody working in the kitchen and just want to get in close on somebody’s hands. I hate trying to set up legs on a tripod.

Kummerfeld: What kind of assignments do you feel like lend themselves to gimbal mobile video?

Davis: I think anything where you need to be on the move, follow the action and situations where you can’t really use a tripod. If you’ve got to be mobile and move or you don’t want to take a tripod and set it up, you just miss shots that way. With the Osmo, you don’t miss a lot of stuff with it.  I just want to be able to go and shoot and not have to worry. I like how smooth it is and it just lets me work the way I like to work, free and unencumbered by a whole bunch of equipment. I like to travel kind of light, so just one camera on the Osmo and I’m ready to go. I use the Moment lenses– I’ve got the wide and the telephoto to use those on there, I’ve got the counter weight so that it still balances out right

Kummerfeld: What are the benefits of using a gimbal in contrast to using your DSLR camera?

Davis: I’ve shot with every kind of camera imaginable and they make gimbals for DSLR, but those get real heavy and complicated and we had to weight them just right. And if you want to switch a lens on it or something, then it throws it all out of whack. So it’s just so simple and easy using an iPhone, I can worry more about the story and my subject and not worry so much about all the technical things that I have to do when I’m using a DSLR or the regular Handycam or camcorder.

Kummerfeld: What are some of the challenges when using a gimbal?

Davis: I don’t try and get real gimmicky with it. I mean, I like to lock it down in place and then have it move real smooth. I don’t try and speed it up. I don’t try to do a lot of pans or zooms or tilts or lifts or anything like that. I think they can get a little unmanageable if you do that. I know there’s some people that probably spend a lot of time practicing and get those moves down, but generally I like to just hold it and lock it down in one position, so that it kind of rocks and keeps that one view that I’m wanting, like if it’s eye level or down below.

Kummerfled: What advice would you give to journalists who are considering buying and investing in gimbals?

Davis: First, make sure that you’re going to use it a lot. You need to figure out what kind of stories you’re going to do and see if it fits into your plan because there’s other tools that you can use. Just make sure it gets into your workflow in the way you shoot and that it doesn’t handicap you, but becomes a tool that aids you. I’ve worked with a lot of breaking news reporters. They just need to go out and shoot some quick b-roll of a police scene, they don’t need a gimbal for that. But we have another reporter who shoots a lot of restaurants and she always shoots a lot of b-roll of people back in the kitchen working and she could probably use as a gimbal pretty easily.

Kummerfeld: Are there any other tools to use with gimbals to make the video stronger?

Davis: That’s probably one of the frustrating things about using the Osmo, at least on my iPhone and where the lightning port is, trying to plug in a microphone. I’m playing around with an audio tool, the Zoom field recorder. I think that might change how I shoot as well because before audio was kind of an issue. And with the Osmo Two, I was relying on the mic on my camera to record my nat sounds. And now I think if I can use this Zoom field recorder and put it in different places where I want to get sound, whether I mic somebody up or I set it near something that’s making sound, then I can go back in and layer that into my video.

Kummerfeld: What are the top three things journalists should think about before buying a gimbal?

Davis: I think first of all, think about what you’re going to use it for. Think about the cost, how much you want to invest. I mean, the Oslo Two’s aren’t that expensive. And then, if it’s something that’s going to help you or hinder you. Journalists are kind of a frustrating bunch to try and train on doing video. I’ve trained a lot of journalists in McClatchy to use iPhones and within a month, most of them have lost their microphone. So I just can’t imagine what any of them are going to do with an Osmo. But I think probably your Osmos are going to be used by your visual journalists and not reporters.

I think they’re a useful tool and there’s times when I think that you can maybe get lazy using an Osmo and forget about some of the basics. It’s easy to put a wide angle lens on an Osmo and just shoot wide and follow everybody around for the day and overshoot an assignment, not thinking about sequencing and wide, medium, tight. So I think you’ve got to be careful how you use the Osmo. It’s like, did I get my tight shot? Do I get a face shot? Did I get an establishing shot? Did I get this, did I get that? You still got to think about the language of video and storytelling and just remember that that’s a tool to help you, but it’s not going to do it all for you.

Editor’s note: this interview has been edited for length and clarity