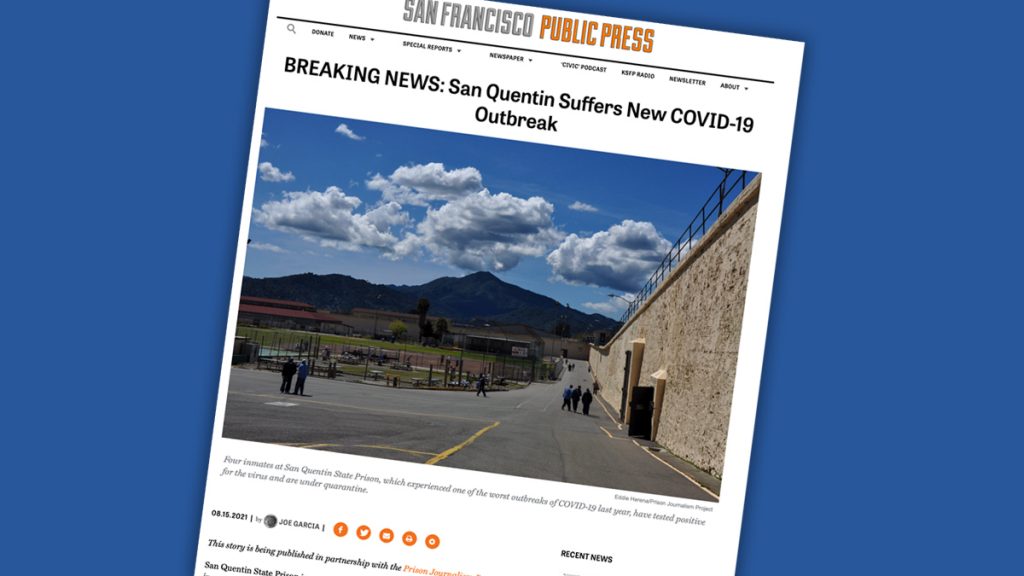 Last month, the Prison Journalism Project broke new ground with a story that began with an unexpected phone call from our correspondent inside San Quentin State Prison in the San Francisco Bay area. Normally, Joe Garcia calls to check in on Tuesdays, but this was a Wednesday, and he never called two days in a row unless there was news.

“Alpine is on lockdown,” Joe Garcia told me, referring to his cellblock. “A guy tested positive.”

San Quentin was the site of one of the worst COVID-19 outbreaks last summer, infecting more than 70% of the population and killing 29, including a corrections officer. Joe didn’t know yet how serious the situation might be, but everyone was nervous amid news of the delta variant spreading quickly outside prison. The residents also were annoyed because the prison had just returned to normal operations after being under lockdown for over a year.

While Joe was pounding the pavement in the few hours of movement he was permitted daily under lockdown, the Prison Journalism Project editorial staff gathered background reporting and contacted the department for comment. We thought this story would be of interest to a local media partner, so we contacted our friends at San Francisco Public Press, an independent nonprofit news organization with a reputation for investigative reporting.

Later in the day, Joe called to dictate his story and also tell me that two more prisoners from his unit were moved from their cells into isolated quarantine because they tested positive. The California corrections department considers three related cases to be an outbreak, so this got my attention.

SF Public Press had worked with us on a couple COVID-19 reports out of San Quentin in the past, so the editors responded positively, and we shared the story draft with them.

That’s when I got a dose of reality about the gap between prison reporting, journalism standards, and the high bar it sets for a story, particularly with unnamed sources.

As a journalist myself, I knew the drill. I broke countless stories, talking to as many people as possible, doing my best to persuade them to go on the record, cross-checking facts and in the end, always seeking official comment.

But incarcerated writers operate in a controlled, punitive environment, and it’s simply not possible to seek official comment or to quote corrections officers or prison officials on the record because their sources could be reprimanded or lose their jobs and the writers could face reprisal.

And yet, we believe that their story has an important role to play in the information ecosystem. Journalism needs to be more inclusive to under-represented communities like the incarcerated, and we have to figure out a way to adjust the rules without compromising our integrity. We believe that the rigidity of capital “J” journalism is part of the reason why voices like those from incarcerated writers are rarely heard from.

One of the policies we’ve put in place is transparency. If we are publishing a story with unnamed sources, we ask the writers for details about who the people are, the number of people they spoke to, and their race and age if relevant to the story.

When Joe’s story came in, I asked him a number of questions about his sources, what they said exactly and when. We also went over prison terminology and the locations of buildings mentioned in his story, so I, as his editor, understood the situation.

But even though I had scrutinized Joe’s sourcing, Liz Enochs, the managing editor at SF Public Press, took it deeper. She wanted to know which source was providing which piece of information specifically. If Joe attributed a piece of information to multiple sources, she wanted to know how many were other prisoners and how many were corrections officers and did each one corroborate all of the information or did different ones offer up different pieces that Joe was then using to build his story?

While we were going back and forth on the questions, Joe got the chief medical executive at San Quentin to confirm his story on the record, which made the decision to publish a lot easier. But I asked Liz if she would’ve published the story without it.

“I was leaning towards it,” she said, adding that it helped greatly that we had a prior relationship and that the story had news value. “The fact that you had other supporting information was helpful.”

But then she said our conversation was making her re-consider. “If it wasn’t for the endorphin rush of a breaking news story, I might have been a little skeptical,” she admitted.

Liz acknowledged the challenge of weighing journalism standards against prison-specific considerations like safety, but she advised, “The more you can hold them to standards of the outside world of journalism with the understanding that (not all reporters) get that kind of scrutiny, the better off they are. It puts them on a level playing field and potentially ahead (because of the rigorous editing).”

We believe that the rigidity of capital “J” journalism is part of the reason why voices like those from incarcerated writers are rarely heard from.

In my fellowship work, I planned to create a strategic framework for collaborative partnerships with journalists, media organizations and incarcerated writers. But I was getting an inkling that the toughest piece of it might not be with our writers. If we can be crystal clear in our communications, expectations and shared journalistic values with our writers,  then working with media partners becomes much easier because we can vouch for them.

Another way of looking at it: We could have the best framework in the world, but a single misstep could erode trust and unravel a reporting partnership, given the stigma and skepticism toward  the incarcerated community.

The San Francisco Public Press is precisely the kind of organization we want to be working more with: They are open-minded and publish work by non-traditionally trained writers, but they also take journalism seriously in a way that aligns with PJP’s ethics. If we are to embark on bigger, more involved projects with media organizations like them, we need to first shore up our expectations for the writers and their expectations for us.

How do we do this? What format should it be in? We were already building materials to teach the tools of journalism, and a memorandum of understanding covering transactional details like pay and content ownership, but we also needed to find a way to come to a shared understanding and agreement around reporting and journalism without unilaterally imposing our views on them.

When I asked Loretta Chao, the vice president of strategy and startups at the American Journalism Project, for ideas, she said lots of newsrooms are doing innovative work but suggested I also look outside of journalism such as organizations that do social work and have lots of experience working inside underrepresented communities,

“It’s important for newsrooms to not only see the value of communities as a resource but to also give value back. That’s not something journalists have historically done,” she said, adding that the key question was “how do you not helicopter in and do things about people or for them without empowering people and supporting their own efforts?”

She suggested that we start by thinking about our guiding principles — what we will never do, what we will always do, and what is a deal breaker on how to do business.

“If you’re going into a community that is excluded from journalism, you need to reduce hurdles and make it as easy as possible for them,” she said.

Her colleague Fiona Morgan, AJP’s director of community listening, also advised us to not just think about how to produce content that meets the journalism bar of the outside world, but also consider ways that the content could be presented, so they could collectively harness the power of their stories to shed light on subjects they want to focus on. One example might be to take raw reporting from multiple writers and combine them into one story to provide a glimpse into a particular issue.

She also suggested we ask them how they want to shed light on their community. “Every time you’re engaging with them with some kind of teaching, it’s an opportunity for you to learn,” she said.

I also spoke with Allison Joseph, assistant professor, and Cole Goins, engagement lead in The New School’s Journalism + Design program, where they are building an in-person journalism fundamentals course for community journalists.

“Part of our goal is bringing more people from the capital J journalism world and using a design mindset to think about new ideas,” Cole said. “What are new ways we can think about how we inform our community?”

I loved the idea of breaking journalism down and rebuilding the blocks in new ways that would be more accessible to non-traditionally trained journalists. PJP is trying to do that too, in a very specific community.

In conversing with them though, I realized that the writers would also benefit from guidance on the power of journalism and why reporting from inside the walls was important.

If we stripped away all the nice-to-haves, what PJP is looking for from them are two things:

If they understand the overall mission of journalism and how they fit into it, then maybe the rest will come easier.

My to-do list for my fellowship project became clearer. Here are my next steps: