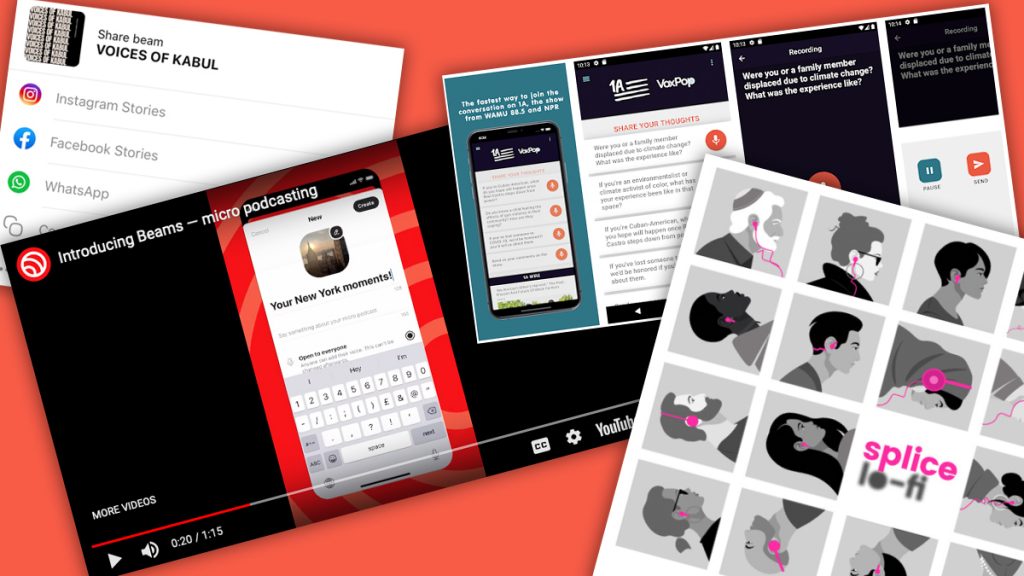 Podcasts and social audio apps like Clubhouse and Twitter Spaces often dominate when newsrooms think about audio storytelling, but they’re far from the only players in town. Here are three other apps to consider, and some of the ways in which journalists can deploy them.

Our screens and social feeds are dominated by what’s happening in Afghanistan, but how often do we hear the direct voices of those who are most impacted? Beams, a social micro podcast platform, is one tool that can really elevate the voices of those on the ground in situations like this, by enabling people to tell their own story in their own words.

The start-up allows users to create a “beam” on any subject, which they post to the app. Other users can listen, and add their own audio feedback or contribution, to the discussion.

“We’re a startup aiming to allow people to collaborate using their voice,” says Michael MacLeod, part of Beams’ community team. MacLeod, a journalist whose experience includes stints at Condé Nast, Instagram and the Guardian, highlights the honesty raw audio can provide compared to other mediums.

“There’s no hiding behind your voice,” he says, observing how “audio has a lower barrier for both journalist and interviewee.”  Subsequently, audio can attract contributors unwilling — or unable — to go on camera, but who will “come out their shell in a way they wouldn’t on screen.” This approach is demonstrated through “Voices of Kabul,” a beam where respondents are sharing their fears — and experiences — of life in the Afghan capital.

It’s a model newsrooms can replicate on a range of topics, with MacLeod advising that “a beam can be ‘invite only’ or open to anyone to add their voice.”

“As a journalist, this excites me,” he says, “because I have the safety net of an invite-only link that I can send to a source or contact to add their voice into. But there are also times you might want as many eyewitnesses as possible to add their voice, and that’s when an open beam could be a useful journalistic tool.”

The use of “Open Beams,” which anyone using the app can contribute to, is “a good way to get multiple views in one place to help paint a picture for the listener,” MacLeod suggests. “As the beam owner, the journalist can then curate and export the voices they want to share on any other social platforms, or link out the full collection as a micro podcast.”

Peter Fowler, a New Zealand-based journalist and founder of the app VoxPop, recalls how, after having to record interviews on his phone instead of “an expensive digital recorder,”  he realized that “everyone with a phone was walking around with a radio studio in their pocket.”

VoxPop taps into this technology by encouraging audience audio on different topics. Voice memos can then be transcribed into text, making it easier to sift through contributions.

1A, a Washington, D.C., originated daily news show from @WAMU885 and @NPR, is another program using the app for audience engagement.

As Rupert Allman, founder and executive producer of the show, says: “Whether they are hearing the show live, on-demand or on a device — folks are one tap away from leaving us a message in studio quality. It has made a huge difference to the sound of the program.”

Allman and his team have also utilized another feature, the ability to create their own branded VoxPop app.

“Constantly directing your audience to go to Facebook or Twitter to interact makes zero commercial sense,” Fowler says. “Having your own branded engagement platform ensures all the editorial energy you are creating stays within your brand.”

Splice Media in Singapore is a company focused on “supporting bold, forward-looking media startups in Asia.” It provides prototype funding to media startups and does training and consultancy work.  Every Friday, Spice Media hosts Splice Lo-Fi, “a quick, weekly audio check-in.” It takes place on the messaging app Telegram and is then converted into a podcast.

“As a two-person team, we don’t have time to sit and craft a ‘proper’ podcast,” co-founder Alan Soon says. “So this is a quick and easy way to get something out the door and to be visible (audible?) in the podcast space.”

Soon, whose experience includes roles at Yahoo, CNBC and Bloomberg, says one benefit of Telegram is that it’s slightly more closed than some other products.

“Clubhouse or Twitter Spaces felt far too open,” he says, “for us, community-building takes place on a first-name basis, and … we also didn’t want to have to be distracted by having to actively monitor and block people who were in the conversation.”

Although anyone can listen to the podcast recordings, only subscribers to the Telegram channel can participate live.

Aside from controlling who joins the conversation, Telegram also allows for the chat to be recorded, which some other apps do not. “You just hit the record button and Telegram sends you the .ogg recorded file after the conversation,” Soon says.

“That is important for us because we can then turn that into a simple podcast after the call,” he adds. “Nothing gets wasted in this kitchen — both in terms of knowledge and content. Other platforms would have required us to duct tape third-party solutions which are simply too cumbersome for something as straightforward as a voice chat.”

Telegram also had another advantage over other platforms: It was accessible to non-iPhone users. “Clubhouse took far too long to get out to Android users,” Soon says. “The majority of people in our community are Android users, so this matters to us.”

Lo-Fi launched in April, part of Soon’s efforts to ensure you “don’t default to the article format.”

“We’re in a rich media space,” he argues, and “that allows us to take conversations into multiple formats – Instagram Stories, WhatsApp groups, Headliner videos, Telegram chats, or even voice memos.”

Ask yourself: What two other formats can I try with this piece of content?