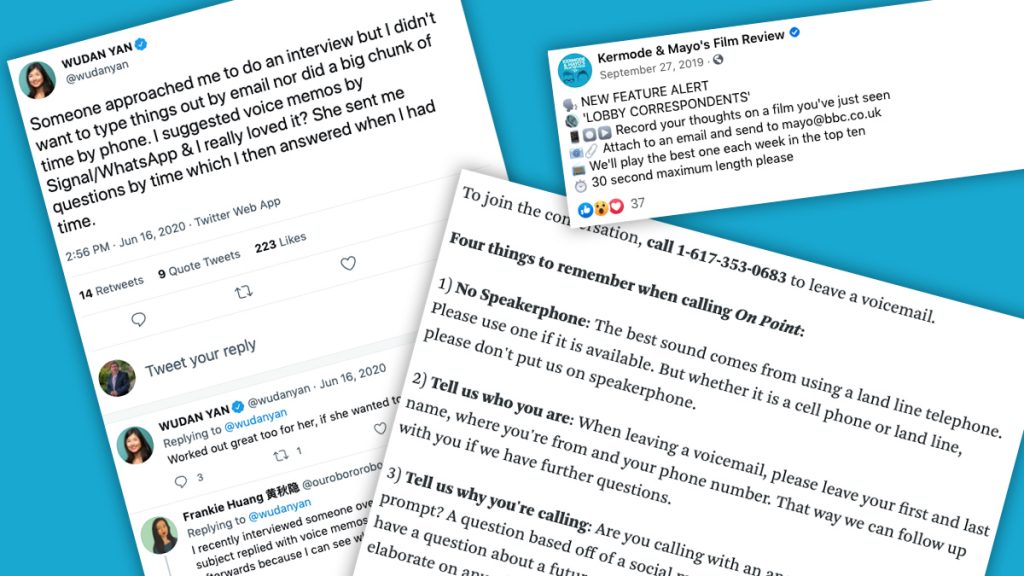 Social media and smartphones have made it easier than ever for newsrooms to encourage,  and use, user-generated content.

However, much of the material solicited from what NYU Professor Jay Rosen has referred to as “the people formerly known as the audience” has focused on photographs or videos of breaking news events. These can add color, flavor and eyewitness media to a newsroom’s offering, but they also only scratch the surface. All too often missing from this mix is audio.

Here are four ways newsrooms can use audio to encourage greater engagement and participation from audiences.

In late 2019, BBC Radio’s flagship film program, “Kermode and Mayo’s Film Review,” encouraged listeners to submit their own thoughts they’ve seen via a 30 second audio recording. They then play the best of these on air.

With COVID lockdowns reducing opportunities to visit the cinema, the show pivoted to encouraging listeners to comment on films you can watch at home.

This format isn’t just applicable to a radio show or podcast. Newsrooms can embrace this idea by featuring audio clips,  submitted by the audience on a myriad of topics, on social media (using tools like Headliner and Audiogram that I highlighted in an earlier column) or on their website as pure audio files.

Platforms like SoundCloud make it very easy to embed audio on most platforms and CMSs.

Newsrooms could also transcribe these audio submissions to create text content for various platforms. This method of information gathering is especially useful for sources that are in a hurry, juggling other obligations, or contending with poor phone or internet connections.

As the journalist and co-host of “The Writers’ Co-op Podcast,” Wudan Yan has shared, voice memos could also be used as a means to replace email interviews.

The speed and ease with which voice memos can be created may result in a more raw and insightful contribution from a source. And as Bernardo Motta, assistant professor at Roger Williams University in Rhode Island, has suggested, you can use transcription apps like Otter.ai to save time typing up the responses.

More importantly, this approach can improve accessibility and participation by facilitating interaction from people who may be put off by the way that we traditionally seek input into the journalism we produce.

This approach can facilitate engagement from sources who might struggle to provide written answers (perhaps for reasons related to linguistic or literacy challenges) to emailed questions, those who feel apprehensive about being interviewed by a journalist face-to-face, and people who simply don’t have the time for a standard phone or in-person interview. Using voice memos navigates those concerns and empowers the interviewee by giving them more control of the journalistic process and their involvement in it.

“On Point” is one of the most popular public radio shows in the U.S. Hosted by Meghna Chakrabarti and produced by WBUR in Boston, the show is distributed by American Public Media to more than 240 stations across the States. It actively encourages participation by voicemail, as well as social channels.

Back in January 2021, the show published a special five-minute podcast prompted by listener messages about the Capitol Riots.

Of course radio stations, especially talk radio stations, have long sought input from their audience on the phone.  But this engagement doesn’t have to be live, and “On Point’s” use of voicemail reminds us that newspapers and other outlets can also use this technology for tiplines, story pitches and feedback.

Back in 2016, journalism.co.uk’s weekly podcast highlighted efforts from CNN and The Washington Post to use voicemail to engage with audiences.  More recently, the BBC’s “Americast,” which functioned as both a TV show and podcast (it’s currently on hiatus until next year’s midterms), featured a segment called “Americanswer” where listeners would submit questions for the hosts to unpack.

These could be submitted via multiple means, including audio, with these voice elements potentially being used on the program.

The pandemic created new opportunities for newsrooms to host online events, embracing platforms like Facebook Live and Zoom to discuss topics that otherwise might previously have been hosted in-person.

Although opportunities for interacting in person are increasing, screen fatigue remains a very real concern. This is where the opportunity to host audio-only events on platforms like Clubhouse (soon to be rebranded as “Shortcut”) and Twitter Spaces can potentially come into their own. As RJI columnist Adriana Lacy has explained, with these tools “newsrooms have a new way to connect with already existing readers and to attract new ones.”

Instead of hosting video discussions, newsrooms can move these conversations to audio platforms. Doing this acknowledges the common “screen off” reality of many video calls, and leans into the fact that audio is a great background medium.

And because audio is perfect for multitasking, audiences can “tune in” for events while cooking, commuting, sitting at their desks or walking the dog. Unlike video, you need not feel guilty if you’re only listening with one ear.

The audio from these sessions can also be repurposed and distributed as podcasts (if you feel so inclined), creating further opportunities for engagement. Given the low production value of many online webinars, I’m surprised more aren’t audio-only. Aren’t you?