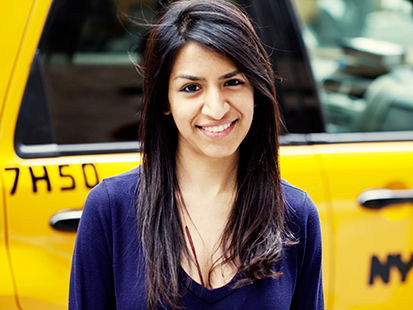 Gone are the days when news organizations had just copy editors and page designers. Today, there are newsroom titles like digital optimizer, audience analyst and executive mobile editor. As social media platforms have evolved so have job titles, along with the tools journalists use to communicate with audiences. In this series, RJI will learn more about these titles and the people who hold them.

This Q&A has been edited for space and clarity.

The position was new to CNBC when Raja arrived in March 2015. Previously, she worked at CNN where she began producing customized content for the social platforms part time, on her own, as a senior associate producer.

What do you do as a social video producer at CNBC?

While the role is ever-evolving, responsibilities include everything from pitching, shooting, editing and producing to publishing, curating and understanding analytics. It involves wearing a lot of hats but the payoff is strong.

Last year, I spent a big portion of my time teaching both television and digital producers at CNBC how to optimize their content for social, creating how-to guides and weekly social video reports. This year, I have been heavily focused on content creation techniques and strategy.

Why is your job important?

Why is storytelling important?  For me, it’s to inspire, inform and, at times, entertain. So why tell a story through social video? In my opinion, we use our social platforms to share our reporting in an alternative way and reach an audience we may not have before. Business news impacts everyone, so why not try to share informative nuggets from our reporting with as many people as we can?

What’s been the most memorable video you’ve produced or edited and what made it memorable?

The most memorable, hands down, was a video with our “Secret Lives of the Super Rich” team. Together we produced CNBC’s first 360-degree Facebook video on what it’s like to ride in a Breitling jet. Just imagine watching 360-degree views of the jet doing barrel rolls.

Did you have to strap a CNBC camera onto the bottom of that jet? How did your team do that?

The “Secret Lives of the Super Rich” team has a 360-degree camera. They just recently used it to shoot the inside of Celine Dion’s mansion. But they actually got the footage for this one from Breitling. The camera they used is the same one we use so it worked out perfectly. It kinda works like a GoPro. You just mount it wherever and hit record. It’s quite simple and the footage looks neat. For me, the tricky part is in the edit. I almost threw up after watching those rolls over and over.

You mentioned that editing the Breitling video was tricky. What made it tricky?

I guess in the technical sense it was tricky because it’s a different way of looking at your edit. In this case the original files were spherical so I chose to flatten them out and convert them into equirectangular ones. And so looking at a flattened spherical video in your timeline just doesn’t feel normal – the dimensions look a bit warped. Then again it’s easier than editing it in its spherical form. So trying to piece one video file after another in the timeline can get a bit tricky to visualize in terms of how it’ll look when you export it back into a spherical video and watch it in its final 360-degree form.

What’s the best way to tell a story in such a short span of time?

There is no right way, but first, I take a step back. I evaluate the story from the eyes of another, with no context, and take note of the most important takeaways. Why is this story important? Is there a need to tell it? If the answers are strong enough to move forward, I take a look at the visuals that are available. If it doesn’t make for a compelling video story, but the takeaways are important for the story to still be told, I’ll pitch it to our CNBC.com writers. And if all arrows point to yes, I write my script and re-write it until I am happy with the outcome.

When it comes to social videos, there are no rules with length. But for news, most audiences are too busy to stick around for longer than a couple of minutes. Every video produced for social needs to be evaluated on a case-by-case basis regarding length and angle. Still, social is a mysterious medium that is yet to be fully understood. As producers for this ever-expanding space and ever-morphing platform for storytelling, it’s important to keep reminding yourself – why this story and why through video?

What advice would you give someone who wants to work as a social video producer?

Don’t let the pressures of producing for a particular platform get in the way of the story you’re trying to tell. Be true to the story and let the platform simply complement the takeaways and embrace the essence of the message.

Working in social and video, I’ve also learned the importance of patience and being able to adapt to the ever-changing world of technology. With Facebook updating their platform to now integrate 360-degree photo uploads, I look forward to the day we can broadcast live streams in 360 within the platform. And while updates to platforms and techniques will continue to change how we tell our stories, the purpose of journalism remains the same.