In an Oct. 26 article in the Columbia Missourian, Emily Shepherd wrote about a Harry Potter-themed astronomy lesson that night at the University of Missouri’s Laws Observatory. Stephanie Miller provided normal photographic coverage, but Claudia Chong and Sarah Wynn covered the event with a virtual reality camera capable of taking 360-degree photos.

While the stars were still bright, Chong and Wynn sent the VR images to producer Zack Newman, who processed them through the Flickr photo site and embedded them into Shepherd’s deadline story just two hours after the event. 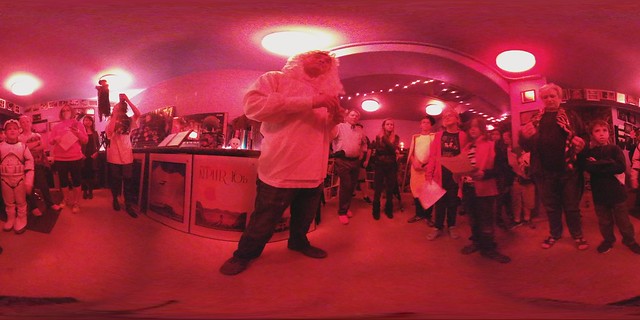 News media across the country have published many 360 photos and videos, but the emphasis to date has been on feature stories with deadlines that stretch over days or weeks.

Mizzou VR Journalism, which I head, is a project of the Missouri School of Journalism.

Our goal is to integrate VR with the normal news process. We unfortunately trade speed for quality, so these shots were not as sharp as we would like them. But it will only get better.

The Mizzou VR Journalism project is funded by Mizzou Advantage and involves 19 students and two teaching assistants testing a variety of cameras and techniques to produce VR on deadline.  As virtual reality photos and videos are taken from a number of lenses at once, the resulting images must be “stitched” together.  The process is notoriously cumbersome.

This type of VR is less than two years old, so we are still in the experimental stages. I believe, however, that it will have lasting impact on journalism.