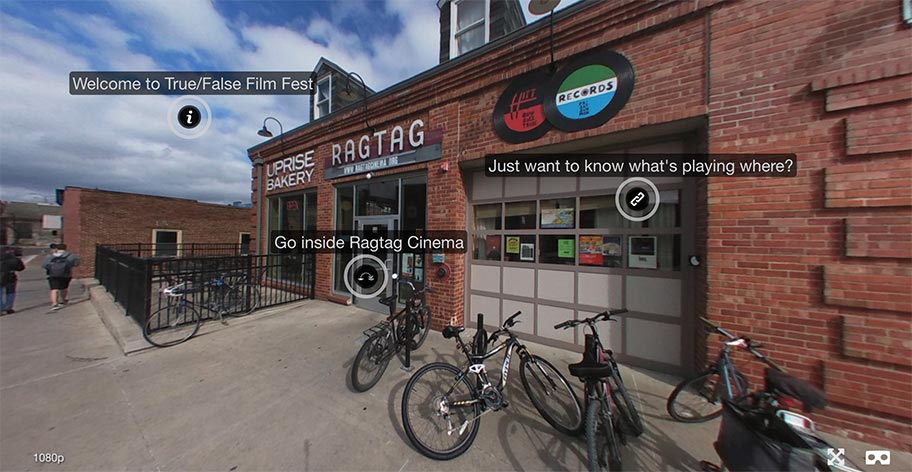 While the amazing visual impact of 360-degree virtual reality is a hot topic in the journalism world, a less obvious aspect of VR could change the very nature of storytelling.

From city council reports to fairy tales, we tell the story in a linear fashion. Although we may vary the elements within the story, the only option for the reader is to go from “Once upon a time” to “The End” in the order we dictate.

The 360-degree VR images we now take, however, are nonlinear. You can’t point a VR camera at your interview subject. The viewer can choose to look anywhere in the scene at any time without the photographer’s permission.

Now VR is bringing that nonlinear format to the basic story itself.

For the past few months, my Emerging Technologies in Journalism students have experimented with a hosted software called Viar360. Launched by a young team from Slovenia in 2015, the software was originally marketed as a way for architects to virtually walk their clients through proposed projects. However, that type of tour architectural software is already saturated. But could it work for journalism?

Viar CEO Jernej Mirt moved a small team to Seattle to test the interest in a unique characteristic of Viar. Not only can one bounce from scene to scene in a tour, but Viar also allows the integration of VR video, normal 2-D stills and video, audio clips, ambient sound and — importantly — text.

The key for journalists and storytellers is that all of this is available in whatever order the readers and-or viewers want. It also takes no programming skills.

A Viar360 piece (we haven’t decided what to call a “piece” yet) starts with a still 360-degree image.  Into that image, the writer and-or producer adds a variety of targets or hotspots. The obvious use for a hotspot is to take the viewer to another scene — which is why it is called tour software.  However, the hotspots can also be used to take viewers to a 360-degree video with accompanying sound.  Alternately, it can toggle on a narration or music track.

Some hotspots cause regular 2-D photos or videos to pop up in windows within the 360-degree scene. The deal-maker for us, however, was the ability to pop up text – either short blurbs written in a box or entire stories on PDF. If that’s not enough, a click also will take you to a new URL.

Our early experiments with Viar360 ran afoul of our own journalistic prejudices. It’s very hard to get over the A-to-B-to-C process of writing. This type of software is all about alternatives — what do you want to know next?

We used Viar360 for some simple add-ons to stories that were posted on the Columbia Missourian newspaper website once we got it to work with our CMS. We hit our first real success when we took the tour concept seriously and produced a pre-event review of venues for the huge True/False Film Fest in early March.  The tour drew raves from readers — and 1,500 online visits.

Even so, my students have yet to master the inclusion of sound or long text.  But they will. Their final projects due in early May are long-form special features in which they are required to use all the features Viar360 supports. Most of those features will focus on a news angle, but two teams of Strategic Communications students will produce promotional pieces for actual organizations.

What we hope to demonstrate is a radically new form of storytelling. If the reader controls the direction of the story, it’s different every time it’s viewed. The story can supply as little or as much information as the reader wants.  It is dense enough to become a reference but immerses readers so intensely it plays to the emotions.

I’m quite convinced that one could write a book with this software. Maybe not a book.  After all, we don’t know what to call this medium yet.