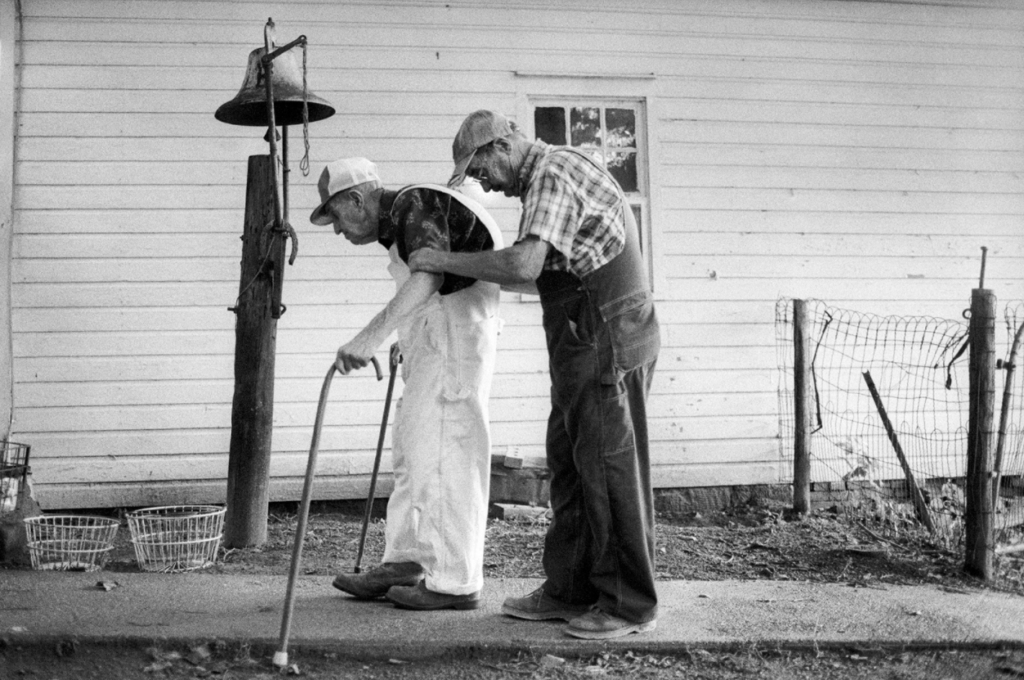 Brothers Carl and Irvin Kahle spent 80 years on the family farm together. They appear in a Saturday Feature in 1995. Irvin was trying to keep the farm going. The brothers were ordinary Americans leading ordinary lives. Photo by Torsen Kjellstrand. This story was part of Torsten’s newspaper NPPA Photographer of the Year award in 1996.

While I spent time thinking about the numbers surrounding my project, looking through data and designing new ways to collect it, something more palpable happened that strikes right at the heart of my main question: What’s the value of strong photojournalism to a community?

For more than 41 years, the people of Jasper, Indiana, picked up the paper each Saturday to see their lives reflected in a rich, photo-driven story, affectionately referred to as the Saturday Feature in the Jasper Herald.

“Everybody knows it,” said NPPA’s Sue Morrow, who wrote about the Herald last year. “They say, ‘Oh, am I going to be the Saturday feature!’ It’s an identity,” she said. Imagine the lives touched by this long-term commitment to rich visual storytelling. Fifty-two weeks a year for more than four decades. That’s roughly 2,100 stories, give or take. (Darn it. Now, I’m back to talking numbers.)

Most importantly, the residents of Jasper, Dubois County and the surrounding areas have gotten to know each other through the beautiful images published each week.

“(The) consistently well-told in-depth stories mean a lot to the community because the stories are the community,” wrote Morrow.

Inspired by a presentation at the NPPA Flying Short Course which showed dramatic photo display on front pages, the Herald’s Saturday Feature was started by former editor and co-publisher John Rumbach and staff photographer Alan Petersime in 1979.

“Rumbach believes that part of the reason the paper has experienced a slower readership decline than most others is due to the popularity of the Saturday Feature,” wrote Morrow.

A photojournalism legacy like this doesn’t just happen. The Rumbach family has published the paper for more than 100 years. Recognized nationally for visual excellence, the Herald has offered two coveted six-month photo internships each year to young photojournalists who have gone on to great success.

Torsten Kjellstrand knows just how much the Herald’s Saturday Feature means to folks in the area. A photo intern, then staffer there in the mid-90s, Kjellstrand worked on a story about the hottest possible jobs in Dubois County during the summer.

He stopped at a farm south of town where the job of the day was putting up hay in the barn. “It was blistering hot and everyone on the farm was so busy,” he said. At one point, the farmer stopped him and asked ‘Oh, is this for one of those Saturday things that you guys do? I love those things! But, in the fall and in the spring when I’m working hard, I can’t get to them so I save them! Then, in the winter… I just sit and read ‘em. Every last one. I just love looking at the pictures,’ Kjellstrand recalled. “Then he talked about how he liked seeing his neighbors and all of that.”

The farmer went on, ‘Have you ever noticed that, like, if there’s two pictures next to each other, one may say one thing and one will say another thing. But if you put them together, they say something completely different?’ Kjellstrand recalled the farmer saying.

“I remember thinking, I had to have someone tell me about that in grad school before I understood ‘third effects,’ said Kjellstrand. “But here’s this guy who got it from reading the paper. This is John Rumbach, educating the community of Dubois County about visual communication.”

The farmer “was clearly not the only person to have noticed this,” said Kjellstrand. “This community has had decade after decade of sophisticated and meaningful visually-inspired local stories on their doorsteps.”

“It’s a special place,” wrote Washington Post Picture Editor Thomas Simonetti on the Western Kentucky University photojournalism blog. “The small newspaper has a decades-long tradition of running a Saturday weekly feature, ad-free, across the first several pages. The vibe in this small town is midwestern and polite and the people really appreciate the way the paper tells the community’s stories. Getting that internship should be a priority for every photojournalism student.” Simonetti interned in Jasper in 2009.

Word of the internship first reached Marlena Sloss when she was an undergraduate in Walla Walla, WA, then again as a grad student at Ohio University.

Later, when Sloss interned at the Washington Post, she worked with Manetti and two other former Herald photo interns, Matt McQueen and Pulitzer winner Carolyn Van Houten. “Having our shared experience from Jasper was great. The time here is very unique and very specific. I feel like I’ll always have that connection with people who have worked here.”

“I had done a whole year of internships elsewhere,” said Sloss, “but coming to Jasper it was very clear just how important these stories were to the people here. Getting to know our audience and getting things right is crucial for photography,” said Marlena Sloss, currently staff photographer at The Herald. “Accountability and access go hand in hand. People let us in. I think they really appreciate getting a closer look with the Saturday Feature and getting to hear these intimate stories about other community members,” she said.

“My first very powerful experience seeing what an impact the photos had was a story planned to be a simple feature about a woman and the cut-out yard art that she creates for holidays,” said Sloss. But the story about Marge Stenftenagel grew.

“As I got to know her, it made sense to do something a little deeper into her life as a widow, living alone and what that was like for her,” said Sloss. “As an intern, I was trying to learn what types of stories fit with our audience. In this environment, people really matter. That hadn’t quite clicked with me before, how readers really perceive the moments in our photos.”

Sloss writes about this story on her blog: What It’s All About

Marge told me that the day the story ran, she could barely get out of church because of all the people wanting to talk with her, compliment her, and thank her for sharing her story. She has received several letters, including one from another widow she has never met. The woman’s letter said Marge’s story inspired her to get more involved in the community and to continue to find meaning in life without her husband, and that she hopes more widows follow suit. Marge also talked about how much it has meant to her personally and how much she’s cried looking at the story. It’s allowed her to reconnect with friends, receive affirmation about her artwork, and most importantly (in my opinion), empower other women in her position.

Editors and co-workers at The Herald drove home the importance of community for Sloss. “The way they think about this is so cool. I had to draw this out in a diagram,” said Sloss.

“It’s no secret that the newspaper industry has experienced major disruptions over the last couple of decades. More than 2,000 newspapers, large and small, but especially family-owned, community newspapers, have closed or been sold. We were fortunate that the disruptions took as long as they did to reach us.”

—    Excerpt of a post from Publisher, Justin Rumbach and Co-Presidents Dan Rumbach and John Rumbach, July 29, 2020

Kjellstrand’s story about the farmer reminds us that our audiences have their own timetable for consuming news, of course. It also reminds us that they do want it and they want it done well. Creating this journalism requires a commitment of time spent with the community and space to let the stories unfold.

New owners, Paxton Media Group will bring new ways of doing things for the 125-year-old newspaper. My fingers are crossed that the people in and around Jasper continue to see themselves featured in strong community journalism, like the Saturday Feature.

Next month I hope to share more about what we know about how audiences perceive photojournalism and be able to provide a preview of the RJI & NPPA testing site for photography and video.