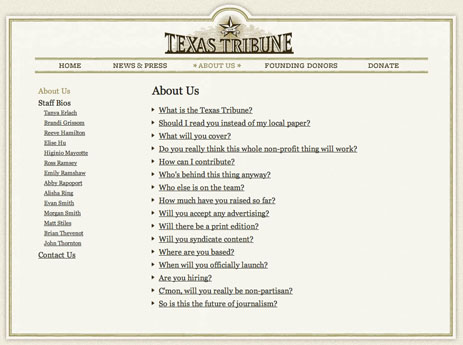 A few weeks back, John Thornton invited me to Austin, Tex., to take a look at his news organization in-the-making, a team of powerhouse journalists from all over the state who are assembling the ambitious effort that will be the Texas Tribune.

Before coming to RJI, I worked in for-profit newsrooms, where the constant primary measure of our value was the number of eyeballs that viewed our work. Sure, we got warm feelings from winning awards or receiving heartfelt letters-to-the-editor, but at the end of the day our worth was measured by the mass of our audience.

Because of my work at RJI, I’ve had the occasion to speak with many others like the crew at the Tribune, working to invent tomorrow’s journalism at places like the Voice of San Diego and ProPublica. Listen to these folks talk about what they’re intending to create, and you encounter a wholly different set of metrics and corresponding values.

And it is arresting.

Here, for example, is how Alfred Hermida encapsulates the stated goals of Voice of San Diego CEO Scott Lewis:

Building an engaged community, user by user, that truly cherishes the work

Scott Lewis, John Thornton, Paul Steiger and others aren’t trying to capture a few stray fragments of attention from the largest audience possible. Instead, they’re building an engaged community, user by user, that truly cherishes the work they do — so much that they support it.

Acquiring mass audiences requires breadth, not depth. Newsrooms built on mass pursue audiences by delivering shallow coverage on a surfeit of topics. This results in news organizations filled with dozens of people, a handful of whom do the diligent work we often call public service journalism. Editors operate under a mandate to produce populist coverage — breezy, accessible storytelling to interest a general audience — rather than focused beat reporting that delivers true insights.

When you switch the equation and focus on the value you deliver to each user, your incentive becomes doing deep, nuanced journalism that makes its beneficiaries more informed and more engaged. You assemble a newsroom like the one John Thornton has in Austin — dogged reporters and star storytellers that invest their community’s attention into a beat, building a devoted user base willing to support journalism it actually craves. And you make it easy for new users to come in, catch up and follow along. Even advertisers get additional value by tailoring their messages to targeted audiences, rather than the grueling, low-return CPM game our mass mindsets brought to the Web.

This model won’t be a panacea. And there’s still a role for mass in the vision of journalism that’s emerging — a healthy ecosystem of curatorial sites should help filter and spread more focused work for a general-interest audience.

We stand to gain a lot from an evolved industry built on a growing crowd of passionate communities and professional public-interest journalists, linked by many curatorial collectors. I believe efforts like the Texas Tribune could be the first green shoots in a marvelous new age of journalism.

Let’s start by imagining measures of journalism’s value predicated on something other than mass.